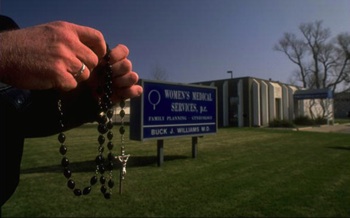 These days, keeping up with anti-choice laws, racist billboards, genocide claims, and attacks on Planned Parenthood feels like a 24-hour job. I suspect that’s the point of the GOP’s and Christian right’s recent blitzkrieg—to make women’s bodies, lives, and personal reproductive health decisions a time-sucking political football in the run-up to the 2012 presidential election. Issues for folks already on the Earth like, say, mass unemployment? Not so much.

Anyway, for my colored girls who have considered tweeting, facebooking, tumblring, blogging, marching or cussing somebody out when the silence ain’t enuff, keep the following anti-choice biggies on your radar. Trust, you’re on theirs.

Last Tuesday, South Dakota passed the toughest anti-abortion law in the land. It will increase the required waiting period from 24 to 72 hours and require those women who have already decided to terminate their pregnancies to visit an anti-abortion crisis pregnancy center (CPC) first.

Now, CPCs, which are also known as pregnancy help centers, have one purpose: To talk girls and women out of having abortions. For instance, overtly Christian Alpha Center of Sioux Falls, which is led by abortion foe Leslie Unruh, claims to offer “a comprehensive range of services to women and men involved in unplanned pregnancies.”

But unlike actual health care providers, Alpha doesn’t provide prenatal care or HIV testing and treatment (although they will charge clients $23—cash only—to find out if they have chlamydia or gonorrhea). They can’t even guarantee an ultrasound; “volunteer client advocates” determine who gets one. Alpha clients do have full access to ideologically-based talking points such as “second virginity“ and hopelessly distorted health information including  “abortion side effects.”

South Dakota is overwhelmingly white. (I’m looking into how this law might affect its Indigenous population.) I’m willing to bet every unfertilized egg in my body that copycat laws will be introduced or resurrected in more diverse states soon.

With a stated aim of sharing “the love and truth of Jesus Christ in both word and deed,” Care Net claims to be the first organization to specifically “serve” African Americans, a tactic they call planting:

“Recognizing that over 94% of the nation’s abortion providers are located in metropolitan areas, many of which are predominantly minority populated, Care Net is strategically planting new pregnancy centers in these urban communities in order to provide needed abortion alternatives and pregnancy support services.”

To cement their black community cred, Care Net has done ad buys on BET, and partnered with black churches in Philadelphia and Atlanta to create centers. A Washington, D.C., center is in the works.

Latinas are the next target:

“The successes and lessons learned in engaging the African American community (albeit a different culture) will be beneficial as we expand our efforts to reach another underserved community—Hispanic women.”

Praying for the Third Wave:

“O that the murderous effect of the abortion in the Black and Latino communities, destroying tens of thousands of lives at the hands of white abortionists, would explode with the same reprehensible reputation as lynching. … Such leadership would sweep the field, and the white pro-choice establishment would fall before it.”

Care Net and Heartbeat jointly run Option Line, a hotline that encourages women to call or instant message CPC volunteers, who then direct them to the centers. Under the pseudonym “afraid,” I took the IM function for a test drive myself. I’ll cover those results in a followup post.

Heroic Media is the Austin-based anti-abortion nonprofit behind those dangerously vague “Pregnant? Scared? You’re Not Alone” ads littering big city subways and buses. Along with commercials on major networks, these ads and billboards send women to a so-called helpline. The helpline directs them to—you guessed it—a CPC. Heroic has fans in Bill O’Reilly, former Georgia senator and governor Zel Miller, Oliver North, Laura Ingraham and Ronald Reagan’s son Michael. Sarah Palin and gonzo anti-abortion activist Lila Rose are appearing at an April 30th fundraiser in Bethesda, Md. Heroic’s also having spring fashion show fundraisers with clothes from Dillard’s. With friends like these, Heroic Media is clearly an enemy to women of color who need quality, unbiased reproductive health information, birth control, emotional support and access to safe abortions if that’s what they choose.

If you haven’t seen this August 2010 HBO documentary, get it on demand. You’ll see how one Fort Pierce, Fla., CPC tries to guilt, misinform and otherwise manipulate women, girls and couples facing an unplanned pregnancy.

Bonus: Read how members of SisterSong and other women of color fought racist billboards and won. It’s valuable context for the overall race-based anti-abortion strategy that includes CPCs.