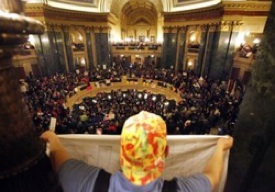 After three weeks of demonstrations and an occupation of the Capitol building, the labor battle in Wisconsin was coming to a head after Gov. Scott Walker’s Republican allies suddenly rammed through legislation aimed at gutting the bargaining power of public-sector unions and crippling them financially.

The question now is whether unions will push back with the kind of job actions that launched the biggest labor mobilization in decades–or allow Walker to drive a legislative steamroller over half a century of public-sector unionism in Wisconsin.

The immediate reaction to the legislative sneak attack was furious. Thousands of protestors swarmed into the Capitol building in Madison–six days after an occupation had ended. “General strike!” was among the most popular chants, along with “This is what democracy looks like!”

Asked if he supported the call for a general strike, Joe Conway, president of Madison Local 311 of the International Association of Fire Fighters, said, “I’m in total agreement. We should start walking out tomorrow and the next day, and see how long they can last.”

Mike Imbrogno, an executive board member of American Federation of State, County and Municipal Employees (AFSCME) Local 171 at the University of Wisconsin (UW), described the scene inside the Capitol:

People keep asking, “When are we going on strike?” There is the broad mix of workers here who have been out for the last three weeks: boilermakers, AFSCME members, teachers, firefighters, graduate employees of the UW Teaching Assistants’ Association, lots of building trades people.

Many students and parents are here with their children, too. People got the e-mail that this was happening around 5 p.m., and they immediately rushed here. As the crowd swelled outside, the cops abandoned the doors and let everybody in. This is a turning point. People’s anger is overcoming their fear.

While thousands jammed the ground floor, a few dozen protesters, many of them TAA members, made their way into the state Assembly chambers, where they planned to sit in to block that body’s vote on the final version of the anti-union bill, scheduled for the morning of March 10.

Even Democratic State Rep. Brett Hulsey, who last week actively urged protesters to abandon the occupation, this time gave up on trying to limit the action. UW graduate student Aongus Murchada said, “I shouted at him, ‘You going to lead us out again, Brett? We’re not leaving.’ He said, ‘I don’t blame you,’ and just walked away.”

The Republicans’ maneuver comes after a three-week standoff in which state Senate Democrats were able to block the anti-union provisions since they were part of a broader “budget repair bill” that requires a quorum of 20 votes because it concerns fiscal matters. The Republicans have 19 seats in the Senate, which meant that at least one of the 14 Democrat had to be present. By leaving the state, the Democrats stalled action on the bill.

On Wednesday, Walker and his main legislative ally, state Senate Majority Leader Scott Fitzgerald, decided to drop the pretense that their anti-union attack has anything to do with balancing the state budget. They moved the anti-union measures into a separate bill that wasn’t about finances, so it didn’t require any Democrats to be present for a quorum.

Walker’s bill would bar collective bargaining over anything other than wages, which in any case would be limited to the rate of inflation. The automatic deduction of union dues would be barred, which could cripple the unions financially. The unions would further have to hold annual elections to maintain their status as bargaining units. Beyond this, Walker’s bill would force state employees pay 12.6 percent of their health insurance and 5.7 percent toward their pensions, resulting in a cut in weekly pay of at least 5 to 7 percent.

If the anti-union legislation passes the Assembly in its final version on Thursday, Walker is expected to sign the bill into law immediately.

So the unions are faced with a do-or-die proposition. The repeated mass mobilizations–which exceeded 100,000 on February 26–have failed to deter Walker. Now labor must go beyond demonstrations to take action that will force Walker and his business backers to retreat. Without such escalation, the public-sector unions in Wisconsin may well cease to exist as effective workers’ organizations.

Whether or not the anger of the union rank and file will push union officials into action is unclear. “Right now, what I am seeing from the labor leadership is a lack of response,” said J. Eric Cobb, executive director of the Building Trades Council of South Central Wisconsin. Top union leaders have been in a reactive mode, rather than leading, he said.

Cobb pointed out that top union officials have focused only on the attacks on collective bargaining, rather than the economic attacks on workers or the other anti-worker elements of the bill, from cuts in state health care programs to the privatization of the University of Wisconsin. Labor officials, said Cobb, “have always backed off from fighting actively against the aspects of the budget repair bill that are literally devastating.”

In recent days, union leaders have shifted their focus further away from mobilizations, and toward the recall of eight Republicans in the state Senate, as well as the campaign for the Wisconsin state Supreme Court. A mass labor rally scheduled for March 12 was intended to give a boost to that effort.

Now it will be test of whether unions will stand up to the challenge of the greatest attack they’ve faced since President Ronald Reagan fired 11,000 striking members of the Professional Air Traffic Controllers Organization in 1981.

“When this [anti-union legislative] bomb hit, I called my union leadership,” Cobb said. “The best answer I got was to get as many people to the Capitol as possible. But the Capitol is not the prize. The prize is our rights. The prize is not having people’s back broken by having them pay for this Wall Street greed.”

Labor has already shown it has the power to stop Walker’s union-busting. But do union leaders have the will to use it? Following the Senate passage of the union-busting bill, the Wisconsin Education Association Council (WEAC) called on members to go to work as usual on Thursday.

Yet the great mobilizations over the last three weeks–and the outpouring of solidarity from across the U.S.–were only possible because teachers in Madison called in sick February 17 to lead a sit-in at the Capitol. Hours later, their parent union, WEAC, urged teachers across the state to skip work the following day and join the protest.

The teachers’ job action was the spark for tens of thousands of people to make their way to the Capitol as well. There, they made common cause with the students and workers who occupied the building and turned it into a round-the-clock political speak-out and strategy session.

Construction workers in hardhats and firefighters in their gear mingled with state office workers, highway repair crews and health care workers. Nonunion workers rallied in support as well, based on a feeling of solidarity and a recognition that if organized workers could be defeated, they would suffer, too.

The feeling of solidarity–and momentum–for our side grew as Walker’s popularity plunged. After a year in which the corporate-funded Tea Party protesters were highlighted in the mass media as the authentic voice of grassroots America, the mass labor mobilization in Wisconsin put working-class political struggle back on the political map for the first time in decades.

But once teachers were back at work after three or four days, police gradually reasserted control over the Capitol. Though the union rallies grew larger and larger, labor leaders shifted increasingly toward an electoral strategy of recalling the Republicans.

Certainly, the recall effort is a useful pressure tactic. But in practice, union leaders have counterposed the electoral strategy to further job actions that can put pressure on Walker and his business backers.

Even worse, union leaders have repeatedly offered to accept the concessions on health care and pensions demanded by Walker in exchange for continued collective bargaining rights. WEAC officials have gone so far as to urge affiliate unions to include those same concessions in two-year contract extensions with local school districts.

The apparent aim was to protect the union’s status–and its collection of dues–if Walker’s bill is passed.

But Walker apparently took all this as a sign of labor’s weakness. And no wonder: If union officials are willing to take concessions even as labor shows its power to organize and inspire masses of people, why shouldn’t employers try to crush unions once and for all?

The next attack is likely to come on March 13, when Walker has announced that he will no longer honor a contract extension for AFSCME and other state employees.

But if the mood of the Wednesday protests when Republicans rammed the bill through is any indication, Walker has overreached once again. He’s made it clear that what’s really going on isn’t an effort to fix a state budget deficit, but a showdown between capital and labor. Talk of a general strike isn’t the product of the anger of the moment, but a conclusion reached after decades of a one-sided class war–and a powerful three-week mobilization that shows the power of workers’ collective action.

If union leaders won’t move face up to this battle, then the rank and file that has already showed so much strength and determination must take the initiative again. Unions have to respond to Walker by fighting as if their lives depend on it–because they do.