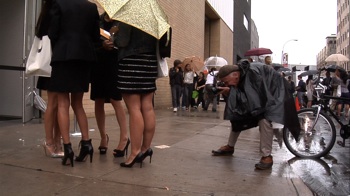 No one upholds the street cred of style with as much manic fervor as Bill Cunningham, the irrepressible octogenarian New York Times fashion photographer. A decade in the making, Richard Press’ Bill Cunningham New York shows its fiercely private subject to be the ultimate anti-scenester. Wiry and jovial, with on occasion awkwardly flailing arms and a slight idiot savant affectation, Cunningham resembles a silver-haired Hulot rather than an arbiter of taste, as he rides his trademark bike — his 29th; the previous 28 were stolen — around town on a never-ending quest for beauty.

In an era, according to Cunningham, of “cookie-cutter sameness,” he not only captures touches of attire or whole outfits that bespeak the wearers’ distinctly individual taste, but he also often distills from their combined impact the penchant for a particular fresh look or new trend. If, as Roland Barthes suggests, turning photography into an art serves “to tame the Photograph, to temper the madness” that animates it, Cunningham’s artistry defies such pretensions and taps into the élan vital to fashion through an uncanny, visionary knack for collage. The flair of cubist analysis in the layout of his weekly columns — the populist mosaic “On the Street” and its society counterpart “Evening Hours”— makes for a signature as unmistakable as one of Banksy’s rats.

Like the imprint of his fellow anonymity-seeking street artist, Cunningham’s roaming camera eye appears ubiquitous, yet operates with the utmost discretion, which, instead of a strategy, seems to be a matter of old-fashioned propriety. We find out hardly anything about his Irish-Catholic New England family and the sense of decorum they might have instilled in him, but Cunningham has an oddball patrician air about him. When he is snapping the wealthy at their gilded gatherings, including his friend Brooke Astor’s 100th-birthday bash, it is not hard to imagine him as a prodigal cousin who has opted out of privilege and chosen the simple life.

From his diet of cheap sandwiches and coffee and his taped-up battered poncho to his lack of any wardrobe to speak of, Cunningham fastidiously refuses to allow himself any luxury, because doing so would make him corruptible. “Money is the cheapest thing,” he asserts, and resisting its pull means that nobody owns you. He doesn’t have the slightest interest in celebrity and pomp; he just loves clothes — on other people — and he has accumulated an extraordinary, almost intuitive historical knowledge of their design.

Cunningham declares that fashion is our armor, but for him it is the passion that he lives and breathes. In the rare unguarded moments of Bill Cunningham New York Press shows the mysterious loneliness of this modest, generous man. Even Cunningham’s closest collaborators and fondest admirers don’t know anything about his personal life. Maybe in one of the filing cabinets he moved out of his hazardously crammed Carnegie Hall Tower apartment early last year, a Rosebud photograph awaits discovery. But that would be a different movie