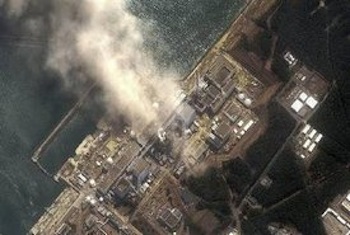 A fire at the stores of spent atomic fuel in Japan‘s stricken nuclear reactors would dramatically raise the dangers of a radiation leak, scientists have warned.

Tokyo Electric Power (Tepco) confirmed a fire in Fukushima Daiichi’s No 4 reactor on Tuesday, following an explosion that damaged the structure housing the massive concrete pools storing fuel rods used in the reactor. A further fire broke out at the No 3 reactor on Wednesday, where a fuel storage pool had overheated and may have let off radioactive steam.

Nuclear engineers warn there is more radioactive material stored in those pools than in the reactor core – and a fire would increase the chances of radiation spreading.

“If the spent fuel pool is on fire, the chances of radioactivity getting to the public are very much higher,” said David Lochbaum, a nuclear engineer at the Union of Concerned Scientists.

He said the unit’s reactor core was emptied out into the spent fuel pool last year following a shutdown. “There is much more material there because there is at least one reactor core plus what there was to start with, and it is in a building that has a big hole in the side of it,” he said.

Scientists began raising concern about the possibilities of fire and radiation leak from the waste sites on Monday.

Robert Alvarez, a senior policy expert at the Institute of Policy Studies, told a conference call with reporters that satellite pictures of the Fukushima plant showed evidence of damage.

“There is clear evidence that the fuel cask cranes that haul spent fuels to and from the reactor to the pool both fell. They are gone,” he said. “There appears to be copious amounts of steam pouring out of the area where the pool is located.”

The damage confronts technicians with the tasks of cooling both the reactor and the fuel pools, where temperatures also began rising dangerously once the nuclear plants lost power.

“The spent fuel pool in unit 4 is boiling, and once that starts you can’t stop it,” said Jim Riccio, a nuclear expert at Greenpeace. “The threat is that if you boil off the water, the metal cladding on the fuel rods that is exposed to the air, and is volatile, will catch fire. That will propel the radiation even further.”

A 2005 report by the National Academy of Sciences warned of just such a danger.

The study said the spent fuel pools put America at risk of a widespread radiation leak in the event of a terrorist attack. It went on to warn of a radiation leak travelling hundreds of miles causing up to 6,000 cancer deaths. The report urged immediate action to secure the pools.

But even that report – though dire – was not new. In the early 1990s, a number of nuclear engineers – including Lochbaum – warned about the dangerous situation of spent atomic fuel in US plants that were built along the same lines as those in Fukushima.

The engineers called for nuclear waste to be stored instead in dry casks at a distance from the reactors.

Their story made the cover of Time magazine. It did not, however, lead to any improvements in nuclear safety, Lochbaum noted. “It was a design mistake to put the spent fuel in the same building as the reactor,” he said.

The proximity makes it much harder for technicians struggling to cool down the reactor and the spent fuel pool at the same time. “They are Siamese twins, you can’t separate them,” Lochbaum said.