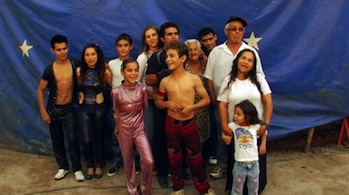 At a time when the circus has almost become folklore in the arena of popular entertainment, Circo documents a broader legacy than that of the show folk whose family ways it traces through the Mexican countryside. The self-sufficient itinerant lifestyle of the Ponce clan, who have been touring their act for over seven generations, appears a relic of tougher yet freer times, mercifully detached from the global social network. The strong, arch presence of grandparents Lupe and Gilberto, owner of the Gran Circo Mexico, embodies a bedrock of tradition their son and ringmaster Tino struggles to uphold. “I’m dancing on a tightrope,” he muses, pulled by rivaling family obligations.

His wife Ivonne wants a better life for their children, away from the entrapment of the circus and what she perceives as exploitation on the part of her in-laws. “You have kids to give them everything,” she proffers, “not for them to give everything to you.” While Tino and his dilemma provide the film’s primary focus, Circo‘s stars are the graceful, resilient Ponce youngsters, whose innate performers’ professionalism makes for kids’ stuff far removed from the wide-eyed wonder of their juvenile audiences. As he grooms his oldest son Cáscaras into an animal tamer, Tino compares the training of his children to that of the tiger cubs – a matter of discipline most painfully in evidence when Lupe and Gilberto make five-year-old Naydelin do back flips until she cries before rewarding her with a tamale.

Even off playing by themselves, though, the kids relentlessly practice handstands, tumbles and contortions, cultivating a prowess that comes with the sacrifice of formal education. Alexia has learned to write a mere five words by age ten, yet she applies her performance make-up like a seasoned pro and contests to her grandmother the debt owed by Tino, who himself still takes spelling lessons from Ivonne. When Naydelin resolves to go to kindergarten and live with her ‘settled’ mother Erika, formerly the Circo’s trapeze artist, director-producer-

cinematographer Aaron Schock renders the impact of her momentous decision with suitable ambivalence.

Poignantly juxtaposing Naydelin’s classroom and playground activities with her relatives’ artistry in the ring, his cutting back and forth proves objective if not altogether impartial, as if comparing prose to poetry. Throughout the film, Schock’s non-interventionist aesthetic avoids the pitfalls of both fly-on-the-wall and exposé pretense: his subjects often directly and candidly address the camera, but he is never heard asking any questions and remains unobtrusive. (Only once, during the Day of the Dead visit to great-grandmother Alejandra’s house in Sinaloa, does one of the family members tell him to stop recording, so they can tend to the matriarch’s debt at the local store.)

The filmmaker’s ability to capture the magic of the Ponces exudes no patronizing preciousness or nostalgia. Instead his style is tantamount to a display of faith in the same organic relationship between the circus and the cinema that inspired the great showmen directors of yesteryear – from Chaplin to DeMille, Browning to Fellini. Circo‘s impressionistic portrayal evokes the intense physicality and minor-key, natural glamour of acrobatic skill and menial labor alike, making twelve-year-old Moises appear no less poised swinging upside-down in a practice session on the aerial ropes than swinging his sledge to hammer a stake into the ground.

A consistent alternation between close and long shots suggests that for those born and raised in the Circo Mexico, the circus exerts a gravitational pull that runs in their blood and will always draw them back into the inner sanctum of the ring. Erika and her sister Reyna return from their domestic lives to perform for short stints, and their brother Tacho resumes the daredevil act of riding his motorcycle around inside the ‘globo de la muerta.’ After a failed six-month stab at an everyman existence, he concludes that the only thing his “hands are good at is putting up and taking down the circus.” By the end of the film, despite this sibling support, Tino seems to be waging a lone, losing battle against the pressures of economic hardship and family crisis, but with Cáscaras taking over from him as the Circo’s voice, the Ponce show must, and will, go on.