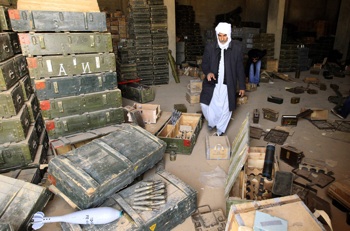 Muammar Gaddafi, Libya’s embattled leader, is defying mounting calls to step down and has instead dispatched forces to several far-flung regions in a bid to reassert his control that has been threatened by the uprising sweeping the North African nation.

Barely 12 hours after the United States said it was moving warships and air forces closer to Libya, Gaddafi’s forces re-asserted their presence at the Dehiba border crossing in the country’s west on Tuesday, decorating the border post with green Libyan flags.

Reporters on the Tunisian side saw Libyan army vehicles and soldiers armed with Kalashnikov rifles. The previous day, there was no Libyan security presence at the border crossing.

Residents of Nalut, about 60km from the Tunisian border, also reported seeing paramilitary forces massing outside the city.

The fresh deployments come after a night of clashes that broke out after pro-Gaddafi forces attempted to wrest back the city of Az Zawiyah from opposition control.

Residents took out a victory march in the city, 50km from the capital Tripoli, on Tuesday, after having successfully repelled the assault.

“Allahu Akbar [God is Great] for our victory,” residents chanted as they paraded through the city’s main square. Some carried on their shoulders an air force colonel they said had just defected to the opposition side.

Witnesses said pro-Gaddafi forces battled opposition fighters for six hours overnight but could not retake control of the city.

But some analysts doubted that Gaddafi would launch a widescale military offensive to regain captured territory given the
outside pressure.

“He is losing out sections of Libya very very fast. He has no influence except in Tripoli and even there very small areas
are under his control.”

Gaddafi’s influence over the desert nation has drastically shrunk following the deadly protests. The opposition movement is in control of most of the eastern region, and several cities elsewhere have also slipped out of Gaddafi’s hands.

Numerous tribal leaders, officials, military officers and army units have defected, weakening the leader who has ruled Libya for more than 41 years.

Meanwhile, international pressure is continuing to mount on Gaddafi, with David Cameron, the British prime minister, saying his government will work to prepare a “no-fly” zone to protect the Libyan people.

Sergei Lavrov, the Russian foreign minister, has called on nations to fully implement Saturday’s UN Security Council resolution on Libya. The measures agreed at the world body included a freeze on Gaddafi’s assets, travel bans on him and his associates, and referring his regime’s brutal crackdown to the International Criminal Court.

Concerns are also growing over the unfolding humanitarian crisis in Libya.

A resident of  Az Zawiyah told Al Jazeera that he feared a food shortage as Gaddafi loyalists outside the city were hindering food supplies from entering the city.

The UN refugee agency UNHCR says more than 110,000 people, mainly foreign migrants, have fled Libya to neighbouring countries and thousands more are arriving at the borders.

The Red Cross and UN have complained of limited access to Tripoli and areas in the west. France said humanitarian aid must be the priority in Libya rather than military action to oust Gaddafi.

The French government has sent two airplanes with medical equipment and staff to the Libyan city of Benghazi, now in the hands of opposition, and more planes are to follow, government spokesman Francois Baroin said.