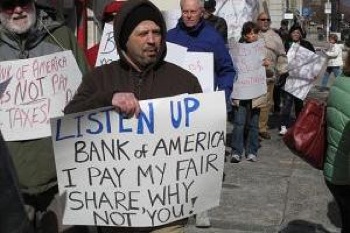 The traditional union approach to budget politics is to accept the limits of what’s possible—typically defined by politicians and lobbyists—and push for the best deal we can within those fiscal constraints.

Labor leans heavily on its inside game, and builds outside pressure in the form of anti-cuts coalitions that highlight the vital services public employees provide, and the harm that cuts will cause to the poor and vulnerable.

Raising taxes is painted as the political kiss of death, so politicians—and most unions—aim low. They avoid engaging with the deeper question of what a fair economy would look like and what role budgets play in getting us there.

That approach is a disaster these days. With no hope that the federal government will plug the states’ $112 billion budget hole this year, the “politically realistic” options are all bad.

Some unions are looking beyond “stop the cuts.” They’re proposing how governments can go where the cash is to raise money for services.

In the best cases, they’re planning more than one step ahead. They’re looking years down the line, to a point where winning budget fights isn’t about what we can live with but what we deserve.

“What’s a piddly two-tenths of a percent increase for the people at the top?” asked Carol Lambiase, a United Electrical Workers representative. “They just got a huge windfall from the Bush tax cut extension.”

Through Better Choices Connecticut, a coalition of dozens of community groups, advocacy organizations, and unions, heavily backed by the Service Employees, the teachers, and the state employee bargaining coalition, activists are pressing to close corporate loopholes and business tax exemptions; lower the estate tax threshold to $2 million; and hike taxes by 2 percent on residents making more than $500,000.

Their proposal would reduce or leave taxes unchanged for 85 percent of the state’s residents, and bump taxes significantly only for the very wealthy.

Unions and community allies are taking their message to town hall meetings and targeting tax dodgers like Bank of America, which paid no federal taxes last year. (The company is hardly the only tax scofflaw, of course).

SEIU, which represents many state employees, staged actions against Bank of America in five towns March 12, part of a national effort (the “Fight for a Fair Economy”) that one local officer likened to a “Tea Party of the left.”

Turn Up the Heat

In Chicago, reformers elected last year to head the Chicago Teachers Union are pressing to reshape the city’s spending priorities. Their target is Chicago’s“tax increment financing” (TIF) program, which the union says drains $250 million yearly from schools and doles out cash to politically connected developers and big banks.

The money was supposed to encourage development in blighted areas but instead subsidized luxury housing and big-box retail stores.

“There are over 100 schools that don’t have stand-alone libraries because Chicago’s elected officials are spending millions on political patronage and calling it economic development,” said Jesse Sharkey, CTU vice president.

On March 19 the union kicked off its campaign to steer TIF money into schools, with a rambunctious group of teachers, parents, and community members taking over the showroom floor of one of the largest TIF recipients, a Chrysler dealership in Chicago’s tony Gold Coast.

A CTU staffer and a community activist were arrested in the action, which began at a Bank of America branch, highlighting the TIF program’s Wall Street connections.

Community activists in New York are also putting politicians on the hot seat. Seventeen activists from Community Voices Heard, a grassroots community organization of low-income residents, were arrested March 2 in a sit-down inside the state Capitol, after pressing pols to raise revenue by taxing Wall Street and the wealthy instead of pushing through more cuts.

CVH leader Agnes Rivera noted that because of the state’s heavy reliance on sales tax, poor people in New York pay 11 percent of their income in taxes, while the rich only pay 4 percent.

“Does the governor think we’re so dumb that we don’t realize they’re not paying an equal part?” Rivera asked. “They need to tax the rich!”