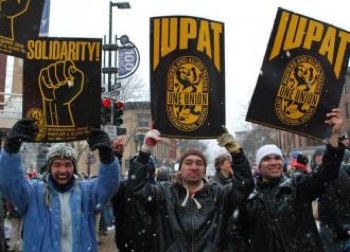 Large and energetic demonstrations by union members and their allies against the governor’s union-busting continue in Madison, Wis., with protesters attempting to swarm into the locked-down Capitol building in evening protests on March 1 and again on March 3.

Yet each day that the battle in Wisconsin drags on, a question looms ever larger: does labor have a strategy to win? Are union leaders prepared to follow up the teachers’ sick-ins that first spurred the mass protests with larger and more audacious job actions?

For his part, Republican Gov. Scott Walker is digging in. He has refused labor leaders’ offers of concessions and is ramping up the pressure on unions and their supporters by threatening both the layoff of 1,500 workers and the cancellation of statewide labor contracts March 13. A the same time, he’s presided over the virtual lockdown of the Capitol building, all but ending the popular occupation of the “people’s house.”

Meanwhile, copycat legislation is advancing in other states, with Ohio legislators poised to gut the rights of public-sector unions as well.

When first confronted with Republican Gov. Scott Walker’s “budget repair bill” that would gut collective bargaining, cripple the unions financially and impose higher benefit costs on workers, the unions responded with a dramatic and powerful job action–a sick-in by teachers, starting in Madison on February 17.

Teachers came to the Capitol to take the front lines of a sit-in and occupation that blocked the proceedings of the legislature February 17 while 14 Democratic senators skipped town to prevent the quorum necessary to pass Walker’s legislation. That evening, the Wisconsin Education Association Council (WEAC) called on teachers not to go to work, but to come to Madison instead.

Suddenly, Madison became a epicenter of labor protest for both union and nonunion workers, students and supporters. The traditional dividing lines in labor vanished. Private sector and public sector, blue collar and white collar, the AFL-CIO and Change to Win labor federations–all were all united in a life-and-death struggle for unions.

Solidarity became the watchword. The near-daily weekday protests grew steadily in size, reaching an estimated 70,000 on February 18 and 100,000 a week later.

What spurred that mobilization wasn’t only fear of Walker’s plan, but also excitement and pride at the teachers’ bold action–sick-ins not only by members of WEAC, Wisconsin’s largest public-sector union, but also by the American Federation of Teachers. After years of passivity in the face of decline and defeat, the unions had finally showed their muscle–and that inspired workers not just in Wisconsin, but across the U.S. and even internationally.

Yet union officials called for retreat to try to preserve a relationship with their employers that they still quaintly refer to as “partnership.”

Thus, Marty Biel, executive director of AFSCME Council 24, which represents Wisconsin state workers, told reporters that his union would accept Walker’s demands that workers pay 12.6 percent of their health insurance benefits and put 5.8 percent of their pay toward their pension.

“It’s not about the money,” one official AFSMCE sign declares. That’s easy for Biel to say, since his own paycheck wouldn’t be affected by the deal. What concerns him and his counterparts in other unions most is that Walker’s bill would end the automatic deduction of union dues from paychecks, which would shatter union finances.

Biel’s stance is all too common among U.S. labor leaders. It’s the approach taken by the United Auto Workers (UAW), once the pacesetter for a rising standard of living for union and nonunion workers alike. The UAW agreed to allow automakers to cut wages for new hires in half in exchange for continued “jointness” with employers. The workers lose, but by helping management sell the deal, the union bureaucracy can preserve itself, at least for the time being.

The problem for Wisconsin union leaders like AFSCME’s Biel and WEAC President Mary Bell is that Scott Walker won’t take “yes” for an answer. The surrender of a big chunk of workers’ paychecks to pay for benefits isn’t really what the governor is after, since the money wouldn’t make a dent in the state’s budget deficit, anyway. The aim is to destroy public sector unions as an advocate for workers’ interests, period.

Thus, labor’s strategy in Wisconsin has hit a dead end. The teacher job actions, while militant, clearly surprised Walker, but didn’t derail his plans. The occupation of the Capitol has clearly irritated the governor, but that didn’t stop him either–nor did the mass mobilizations and threat of a recall election in a year’s time. The unions’ offer of economic surrender failed to entice him in to a deal either.

And sooner or later, the Democrats will crack under pressure return to Madison, giving the state senate the quorum to pass Walker’s legislation.

After the vast February 26 rally, top union officials suddenly took a low profile. The daily noontime labor rallies ceased. And when Walker made his budget proposal in the Capitol on the afternoon of March 1, there was no formal labor rally.

Fortunately, the University of Wisconsin graduate employees union, the Teaching Assistants Association (TAA), brought along a sound system and organized an open mic used by a range of union students, teachers, firefighters and others to sound off about why they were determined to keep up the fight.

And that fight nearly became literal when protesters pushed through barriers to surge toward the Capitol and almost got in, thanks to the efforts of two ironworkers from Milwaukee who led the charge while police scrambled to close an entrance.

With labor leaders vacillating over what to do next, grassroots activists have attempted to fill the vacuum as much as possible. For example, the Kill the Whole Bill Coalition, organizes on the basis of opposing not just the attacks on union rights, but also the reduction in workers’ pay, cuts in Medicaid and other state health programs, the privatization of the University of Wisconsin and more.

Activists in the Kill the Whole Bill Coalition worked with National Nurses United to organize a meeting February 27 at the Madison Labor Temple to build a campaign against all concessions. The sentiment in the room was: Why is labor, in the midst of its greatest show of strength in decades, still sounding the retreat?

The anti-concessions meeting led to a call for a protest on March 3 on the theme of a New Orleans jazz funeral for the progressive Wisconsin legacy. The effort drew some 7,000 people to a march on the Capitol, and more than 100 people were able to push inside the building, at least temporarily. The action reflected the continued militancy and fighting spirit seen over the previous couple weeks and highlighted the potential to raise the level of struggle.

The question, of course, is how organize that fightback. It’s a positive step that major unions have called for another big rally on Saturday, March 5.

But if Walker won’t be moved by massive labor marches or an occupation of the Capitol, the only leverage labor has left is job actions. And from the opening days of the struggle, many labor activists have been seriously discussing the need for a general strike if Walker were to sign the bill into law. In fact, the South Central Federation of Labor, the labor council for the greater Madison area, passed a resolution endorsing a general strike if the public sector unions call such action.

Certainly Walker’s hard-line stance makes it clear that militant labor action will be needed if the unions are to prevail. The challenge is how to begin to overcome the decline in the internal organization of the unions in order to carry out such an action.

The obstacles are formidable but not insurmountable. The rank-and-file union members who’ve organized themselves to come to Madison for protests several times since February 15 can certainly organize in their workplaces to show a union presence on the job, from union buttons and T-shirts to coordinated break-time walkouts, informational pickets and more.

Those activities can be the building blocks for more decisive steps later–such as job actions and limited strikes–and create an environment in which co-workers strategize how to build their unions. For any job action to be successful–let alone a general strike–the level of union organization on the rank-and-file level has to begin to catch up with the fighting mood of the membership.

Just as important, preparing for a higher level of struggle should include a thorough debate over labor’s demands in this struggle. Will the unions engage in job actions in order to save collective bargaining, yet still accept the economic concessions that Walker’s bill includes? Would labor, having won the support of broad sections of the working class in Wisconsin, be willing to make a separate deal and fail to challenge the other attacks in the bill? Will union leaders become paralyzed like deer in the headlights amid Walker’s attacks, or suddenly lurch into calling mass job actions or even a general strike without preparation?

These are the questions that need to be taken up in workplaces and union meetings across Wisconsin in order to take the fight forward. Scott Walker is waging a fight to the finish with the unions. Labor has to be equally determined–and ready to take all the steps necessary to prevail.