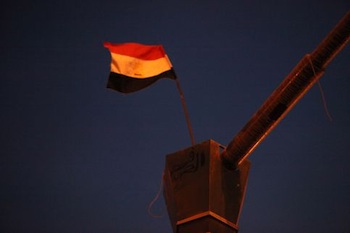 In the 1990s, one could only whisper Hosni Mubarak’s name. Political talk or jokes were avoided in phone calls. This year, millions of Egyptians fought for 18 days against their aging tyrant, braving the police troops firing teargas, rubber bullets and live ammunition. People in Egypt have lost their fear, but it did not happen overnight. The Egyptian revolution, rather than coming out of the blue on 25 January 2011, is a result of a process that has been brewing over the previous decade — a chain reaction to the autumn 2000 protests in solidarity with the Palestinian intifada.

Mubarak’s iron-fist rule and the outbreak of the dirty war between the regime and Islamist militants in the 1990s meant the death of street dissent. Public gatherings and street protests were banned and if they did take place, confronted by force. Live ammunition was used on strikers. Trade unions were put under government control.

Only after the Palestinian intifada broke out in September 2000 did tens of thousands of Egyptians take to the streets in protest — probably for the first time since 1977. Although those demonstrations were in solidarity with the Palestinians, they soon gained an anti-regime dimension, and police showed up to quell the peaceful protests. The president, however, remained a taboo subject, and I rarely heard anti-Mubarak chants.

I recall the first time I heard protesters en masse chanting against the president in April 2002, during the pro-Palestinian riots around Cairo University. Battling the notorious central security forces, protesters were chanting in Arabic: “Hosni Mubarak is just like [Ariel] Sharon.”

The anger was to explode on an even larger scale with the outbreak of the war on Iraq in March 2003. More than 30,000 Egyptians fought the police in downtown Cairo, briefly taking over Tahrir Square, and burning down Mubarak’s billboard.

The scenes aired by Al Jazeera and other satellite networks of the Palestinian revolt or the US-led onslaught on Iraq inspired activists across Egypt to pull down the wall of fear brick by brick. It was in 2004 that pro-Palestinian and anti-war campaigners launched the Kefaya movement, which took on the president and his family.

Though it failed to create a mass following among the working class and the urban poor, Kefaya’s use of both social and mainstream media helped shift the political culture in the country. Millions of Egyptians, while sitting at home, could watch those daring young activists in downtown Cairo mocking the president, raising banners with slogans that were unimaginable a decade before.

In December 2006, workers at the biggest textile mill in the Middle East, located in the Nile delta town of Mahala, went on strike. The action followed two decades of a lull in the industrial struggle, caused by repression and by an aggressive neoliberal program that had the blessing of the IMF and the World Bank. Following their victory, which received widespread media coverage, a wave of strikes engulfed the textile sector, with workers in other mills demanding the same gains as those of Mahala. The industrial militancy was soon to spill over into other sectors of the economy. Images of the strikes, aired via both social and mainstream media, meant millions of workers could gradually overcome their fears, and organize protests inspired by news of victories of strikes in other sectors. As a journalist covering the strike wave in 2007, I frequently heard from strikers: “We were encouraged to move after we heard of Mahala.”

Though scoffed at by some as only economic, the strike wave was political in essence. In April 2008, a mini revolt took place in the city of Mahala over the price of bread. Security forces put down the uprising in two days, leaving at least three dead and hundreds detained and tortured. The scenes from what became known as the “Mahala intifada” could have constituted a dress rehearsal for what happened in 2011, with protesters taking down Mubarak’s posters, battling the police troops in the streets, and challenging the symbols of the much-hated National Democratic party. Soon after, a similar revolt took place in the city of al-Borollos, north of the Nile delta.

Though these uprisings were quelled, the country continued to witness almost on a daily basis strikes and sit-ins by workers, and smaller demonstrations by activists in downtown Cairo and the provinces. Protesting workers in the spring and winter of 2010 occupied the area around parliament, in what local columnists described as a “Cairo Hyde Park.”

Those daily economic and political struggles against the state meant the legitimacy of Mubarak’s regime was rapidly eroding, if it ever really existed.

By October 2010, there was definitely something in the air. It became normal to bump into a strike here or there while heading to work. Civil servants heading home from the office would pass by activists holding small protests in downtown Cairo. They looked, and very occasionally reacted. But they were witnessing visual displays of daily dissent.

Tunisia then went through its own revolt, overthrew a tyrant, and, more importantly, the revolution was televised to millions of viewers in Egypt and elsewhere, largely via Al Jazeera again. This was only one of many catalysts — daily incidents of police brutality provided many others.

The uprising that started on 25 January 2011 was the result of a long process in which the wall of fear fell, bit by bit. The key to it all was that the actions on the ground were visually transmitted to the widest possible audience. Nothing aids the erosion of one’s fear more than knowing there are others, somewhere else, who share the same desire for liberation — and have started taking action.

Hossam el-Hamalawy is an Egyptian journalist from Cairo. He blogs at arabawy.org.

This article was posted on Electronic Intifada, originally appeared in the Guardian’s Comment Is Free and is republished with permission.