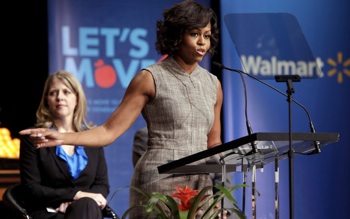 Michelle Obama’s Let’s Move campaign celebrated its one-year anniversary last month. The first lady can reflect on a year in which her initiative has been met with praise among community advocates and policy wonks alike, thanks in large part to its commitment to tackling the obesity epidemic and the nutrition gap with a comprehensive, multi-faceted approach.

From its inception as the White House Task Force on Obesity—which included participation from a wide range of government offices—to its central role in passing new school nutrition standards, Let’s Move has been successfully opened up a national conversation on health and obesity in unprecedented ways. And even though the campaign centers on childhood obesity, folks in every age range will reap the net benefits. That is, of course, particularly important to both black and Latino communities, where mortality rates from diabetes, heart disease and other obesity-related health problems are depressingly high.

But one element of the first lady’s campaign has drawn a significant amount of skepticism within progressive circles: Her would-be partnerships with large players in the food industry, an in particular her endorsement of retail behemoth Wal-Mart’s new healthy-food campaign.

In January, the first lady joined Wal-Mart executives in southeast D.C.—a traditionally black neighborhood in which the controversial chain recently announced plans to open stores—to announce the company’s effort to make its pre-packaged foods healthier and more affordable than less healthy options by 2015. Obama called it a “huge victory” that left her feeling “more hopeful than ever before.”

Last month, The New York Times reported that the National Restaurant Association—a nationwide industry lobby group that includes both large chain restaurants like McDonald’s and local establishments—was in talks with Obama to create menus with smaller portions and more nutritious kids’ meals. Experts in the article were leery of the move:

“Can the food industry play a responsible role in the obesity epidemic? The answer isn’t no,” said Dr. David Ludwig, the director of the Optimal Weight for Life program at Children’s Hospital in Boston. “The point is that the best initiatives can be subverted for special interest, and it’s important to be vigilant when we form partnerships with industry.”

Other critics say that by teaming up with corporate giants like Wal-Mart, the first lady risks undermining activism on other issues, like fair labor practices in communities of color that are increasingly dependent upon service sector jobs. At what point are these companies working in their own best interest at the detriment of consumers? The answer isn’t a simple one, but one thing is clear to those working on food equity: You’ll get nowhere without engaging industry.

“Hating the food industry is not an option,” says Shiriki Kumanyika, a public health advocate and scholar at the University of Pennsylvania and founder of the African American Collaborative Obesity Network.

The “huge victory” Obama championed in the Wal-Mart announcement is creating viable choices for informed consumers. She and others have argued that communities can only win if there is cost parity between healthy food and the high-calorie snacks that contribute to obesity. “If you have a dollar menu item and a healthier salad that costs three times as much, it’s not a choice for people living on a limited income,” says Antronette K. Yancey, co-director of the UCLA Kaiser Permanente Center for Health Equity.

Yancey also emphasizes that it’s not just families who have to make these choices—budget-strapped schools and city-run summer camps also must make cost-effective food purchases for children. Getting the food industry to self-regulate sugar and sodium has long-term benefits; getting a company as large as Wal-Mart on board might just trigger other manufacturers to follow suit, which leads to a marketplace with more healthier options, at a fair price to consumers. Even though consumers are ultimately responsible for the decisions they make, giving them the ability to make those decisions without economic repercussions makes good ones more likely.

“We have a dual responsibility,” says Mildred Thompson of PolicyLink. “Industry has to be held accountable, but we have to be better educators. We have to learn how to become partners with businesses, so it’s not just ‘us’ versus ‘them.’” And communities educated on healthy habits can better hold the food industry accountable, Thompson adds. “In addition to the role that industry has to play, all of us in other fields have to do our part to increase awareness about how the food environment is changing.”

PolicyLink is one of a handful of organizations that have worked to improve access to healthy food by encouraging new markets to open in under-served communities and providing support to existing stores to stock healthier food.

Obama’s Let’s Move! has also not shied away from demanding industry be accountable when it fails to offer real choices. She’s spoken harshly about the products food manufacturers and retailers sell today, and reportedly refused to endorse an industry initiative for putting nutritional information on the front of packages because it wasn’t up to Industry of Medicine standards. Among other things, she’s pushed food retailers to curb advertising unhealthy food to children.

Of course, putting salad bars in schools and revising nutrition labels is only a small part of what it takes to build healthier communities; building the infrastructure to foster healthy lifestyle habits is also essential. “Not every community has the resources needed for health—yet we all pay for the consequences [of poor city planning],” says Valerie Bassett, executive director of the Massachusetts Public Health Association. “People have shorter lives, and it’s all preventable.”

Bassett’s organization partners with community groups across Massachusetts to advocate for local planning and zoning that encourages physical activity. The group promotes healthy school lunch and access to healthy food, but it also prioritizes healthy community design. That’s a component of Let’s Move! that hasn’t garnered as much national attention as its work with the food industry. The campaign has enlisted local officials (superstar Newark Mayor Cory Booker’s a fan) community partners to make healthy design changes on a smaller scale. In Los Angeles, for example, in communities with food deserts, councilmembers have worked with city planners and developers to offer incentives for stores that sell fresh fruits and vegetables.

This is the theme that’s run throughout the first lady’s campaign: create more choices. Public health debates are consistently mired in the false divide between decisions individuals make and the structures in which they make them. The reality is that, for communities of color and low-income neighborhoods, the deck is stacked in favor of unhealthy choices. From industry to government to public education, the first lady has worked to change that imbalance. “If you’ve got more healthy choices, that creates the supply,” says Yancey says. “On the demand side, if people are picking up the message and asking that those choices be available, that’s where you start to see results.”