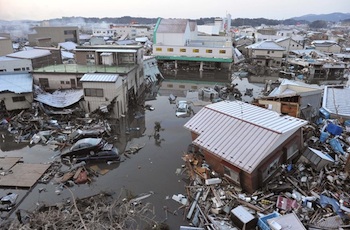 The corporate chieftains who’ve relentlessly pushed American factories and our middle-class jobs offshore rationalize their globalization of production by declaring that it’s all about efficiency, as though that’s the highest value to which a civilization can aspire.

Values aside, however, the problem with corporate efficiencies is that too often they are not. Not efficient, that is. While the corporate scheme of moving stuff from A to B to G to Y in order to achieve the narrow goal of maximizing profits can look so simple, sensible and even slick in a boardroom PowerPoint presentation, it’s often calamitous in the real world. The problem with the best-laid plans of corporate globalizers is that they largely ignore inconvenient facts of life. Such as earthquakes, tsunamis and nuclear meltdowns.

For example, Shreveport, La., has been jolted by the horrific one-two-three blow that has pummeled Japan. What hit Shreveport was not a seismic aftershock, but the inherent fragility of the distant supplier networks built by global profiteers. A GM plant that assembles Chevrolet Colorado trucks in this city has had to shut down because one truck part, made at a factory in the devastated area of Japan, is not presently available. One! Amazing. Cars and trucks have about 20,000 parts, but the inability to get even a single one delivered from abroad can bring an entire assembly line and 923 workers to a halt!

GM’s bean-counters had decided at some point that they could have this gizmo manufactured in and shipped from Japan a bit cheaper than making it here. As a result of such narrow thinking, GM, along with other globalizers, have made themselves (and our economy) dependent on an unstable, far-flung network of foreign factories.

Consider the price of globalized paint. I don’t know why the chicken crossed the road, nor whether the chicken came before the egg, but I have learned that a new car can’t roll down the road until paint is applied, and paint pigment definitely comes before paint.

Such is the zen of CorporateWorld’s delicate supply chain. Philosophy aside, Ford Motor Co. recently announced that it cannot fill orders for black vehicles and must limit production of red ones. It’s a case of three “becauses” — Ford can’t deliver cars in these colors because it can’t get the pigment to mix the paint, because the pigments are made in Japan, which isn’t making any now because of its nuclear disaster.

Who knew that America can’t even make paint anymore?

Moreover, the auto industry’s scattered network of foreign suppliers is itself at the mercy of their suppliers. For example, in the hazy, crazy maze of globalization, some Japanese pickup trucks are made in America, including Toyota’s Tundra trucks, which are assembled in San Antonio. The rear axles for these trucks are made by Hino Motors of Japan at a factory in Arkansas.

That’s confusing enough, but a 10-inch gear is a key component of the axles, and Hino imports them from its factory in Japan, getting just-in-time deliveries of the gears to the Arkansas facility every other day. Unfortunately, the Japanese factory gets its power from the now-destroyed nuclear plant at Sendai, so no gears are being made.

Follow the bouncing ball here: With the Japanese-made gear unavailable, the Japanese company in Arkansas can’t assemble the axles for Toyota’s made-in-America Japanese truck, which means 2,800 workers in Texas could be idled.

A globalized supply chain is inherently splintery, and about a third of the world’s auto production is expected to be lost this year to the earth’s spasm in Japan. Why are we allowing a handful of corporate interests to tie our economy to such a fragile system? The “efficiency” of globalization is nothing but a cross-your-fingers fantasy.

This article was originally published on CommonDreams.org from Creators.com.