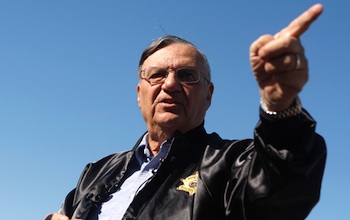 Arizona might be giving the anti-immigrant attacks a rest in its legislature, but out on the streets not much has changed. On Tuesday Maricopa County Sheriff Joe Arpaio announced the launch of “Operation Desert Sky,” an airborne version of his controversial crime sweeps. This time he wants to send 30 pilots into the air with M-16s and a .50-caliber machine gun so they can intercept people trying to cross the border.

“We’re going to use our automatic weapons if we have to, and I’m tired of my deputies having to chase these people and I’m sure the air posse will be able to spot these guys running as they do constantly from us,” Arpaio told Phoenix’s KSAZ.

Last week Arpaio took heat from locals for palling around with action star Steven Seagal and greenlighting an estimated $10,000 in equipment and staff time be used to go investigate a suspected cockfighting ring. Seagal rolled up to the suspect’s home in a tank, and crashed through the front wall of the man’s home.