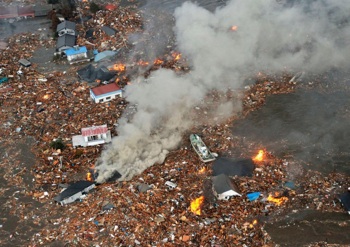 This century, barely out of the box, is already flush with mega-disasters: Hurricane Katrina, Haiti’s earthquake, the 2004 Boxing Day earthquake and tsunami, the BP oil spill, Cyclone Nargis and the Sichuan earthquake in 2008, and now Japan’s earthquake, tsunami and nuclear meltdowns.

Apart from industrial screw-ups like the BP oil spill and Hungary’s “Red Sludge Tsunami,” these events are classified as “natural disasters,” which is a misleading term. The adjective natural should remind us that earthquakes, wildfires, hurricanes and tsunamis are part of a healthy planetary process. Hurricanes and fires in particular play an important role in ecological renewal. It is the collision between a natural hazard and human society and economy that creates the disaster.

Humanity, after all, owes it rise to a wandering asteroid that hammered the Earth 65 million years ago. And if it weren’t for plate tectonics that subduct and lift crustal masses with the resultant volcanoes and earthquakes, there would be no earth under our feet, just a waterworld (at least sans Kevin Costner).

How a society is impacted depends on how it is organized. So the February 2010 earthquake in a prosperous Chile, which claimed less than 600 lives, was about 500 times more powerful than the 7.0 magnitude convulsion in a destitute Haiti, which killed more than 222,000 people.

Japan’s quake at magnitude 9.0 was even more powerful than Chile’s, but relatively few people appear to have perished from the tremor itself because of Japan’s famed emergency preparedness. It was the tsunami that killed thousands and the apocalyptic meltdowns that may claim many more lives still.

Tsunamis offer a unique view into the intersection of society and natural hazards. An Oxfam study found that in much of Indonesia, Thailand and India ravaged by the 2004 tsunami, four times as many women died as men. The timing of the tsunami, hitting on a Sunday morning, struck women hard because Indonesian women who lived near the ocean were much more likely than men to be at home caring for children or women in Indian fishing villages were waiting on beaches to haul back the day’s catch. Plus, according to Oxfam, women in these societies were less likely to have the ability to escape by swimming or climbing trees, all of which contributed to the gender imbalance in deaths.

Economic factors were also at play. Untrammeled seaside development like shrimp farming and tourist resorts decimated sea-grass beds, coral reefs and mangroves, all of which can greatly diminish the force of tsunamis. These projects also often impoverish, displace and concentrate local people in close quarters up to the water’s edge, which increases their vulnerability. And poor countries are far less likely to have early-warning systems for tsunamis. These same factors multiply the human toll of cyclones. In the case of Hurricane Katrina, it was among those who lacked the money and means to flee who suffered the most deaths.

In Haiti, this system of capitalist underdevelopment, enforced over two centuries by France, the United States, the IMF and World Bank, left it economically devastated prior to the January 2010 temblor. Over decades, the migration of Haiti’s rural poor into urban slums left millions living in extremely shoddy housing, which magnified the number of deaths enormously. The effects of underdevelopment, especially deforestation, intensify other natural hazards such as hurricanes, which has added to Haiti’s misery and vulnerability both before and after the earthquake.

Japan’s tragedy, on the other hand, stems more from the hubris of overdevelopment. Its government spent billions of dollars building seawalls that were overwhelmed by devastating waves of water. Critics warned against siting nuke plants on the coast precisely because they would be exposed to the earthquake-tsunami combination. “But the government gives [nuclear] power companies wide discretion in deciding whether a site is safe,” according to The New York Times. In the case of the Fukushima Daiichi plant, where at least two of three reactors in operation have melted down, diesel generators for back-up cooling were placed below a seawall and knocked out of commission by a tsunami that topped the barrier.

For Japan, nuclear power was both a solution to compensate for extremely limited hydrocarbon reserves and a big-ticket export, so it was willing to countenance an industry with an outrageous history of accidents. This includes a 1995 explosion at an experimental reactor at Monju that shut the facility for 14 years; an earthquake and subsequent fire and radioactive leak at the Kashiwazaki plant in 2007; a steam explosion that killed four workers in 2004 at a plant west of Tokyo; and the absurdly tragic case in 1999 of technicians — under pressure from a supervisor to complete their work — resorted to mixing nuclear fuels in buckets and overfilled a tank, which initiated a self-sustaining chain reaction that killed two of them.

Natural hazards, of course, will continue to occur. But with the drive for more industrialization, developing technologies with unknown drawbacks (such as nanotechnologies), and less regulation and oversight, the future looks bleak. Indeed, natural hazards are becoming less and less natural, from the threat of newly emerging diseases inflamed by agribusiness practices to earthquakes apparently caused by hydrofracking and geothermal energy production to climatic and hydrological catastrophes intensified by global warming.

This era of mega-disasters should be making us aware of the insanity of our economy. The one silver lining to Japan’s cloud of deadly radiation is that it may dispel the specious argument that nuclear power is the answer to global warming. But even if it does, we need to dispense with the logic behind this argument: that we can solve one crisis of capitalist development with another capitalist fix.

In the case of climate change, which is likely to reshape our world with unimaginably dire consequences, one “solution” gaining traction is geoengineering. Geo-engineering is based on the assumption it’s too difficult to shift human society toward a low-consumption, shared economy. Instead, keep on driving those SUVS to big-box retailers to fill your McMansion with more crap because we will just re-engineer the earth to adapt it to global warming and our rapacious consumer economy.

It sounds like a joke except some of the biggest billionaires in the world, such as Bill Gates, are throwing their wealth into far-fetched schemes to re-engineer the earth, the oceans and the atmosphere. And when something goes wrong, as it inevitably will, it will make plugging an undersea volcano of oil or cooling a runaway nuclear reaction seem like child’s play.