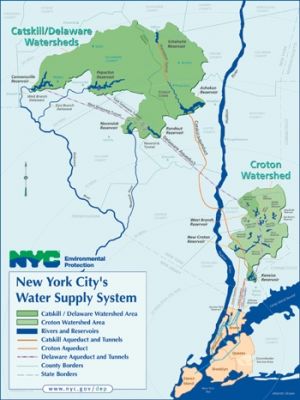 “New York City drinking water is world-renowned for its quality.” This is how the City of New York opens its description on the Drinking Water section of its official web site. Recent reports by media sources and not-for-profits, however, have raised important questions regarding contaminants in the water that suggest maybe this is not the case.

New York City gets its water from a series of reservoirs in upstate New York in the Catskill/Delaware Watersheds and the Croton Watershed. Because of the apparently high quality of the water source, particularly with regard to bacteria and microorganisms, this water is delivered unfiltered to New York City taps. The purity of this water requires heavy scrutiny from the city and state and extensive testing and protection mechanisms. There is reason to believe that much more needs to be done to ensure the purity of this water source.

Riverkeeper, a non-profit NYC clean water advocate, mentions several threats to the reservoir area in upstate New York. Among them are urban sprawl, the presence of pharmaceuticals in the water and industrial gas drilling. Urban sprawl is an issue because it increases the presence of impermeable surfaces, i.e. concrete, asphalt, etc., which increases the amount of polluted storm water runoff that may make its way to the reservoir area that is then transported to taps unfiltered.

Pharmaceuticals are another issue that is of increasing importance. According to Jeff Donn, Martha Mendoza and Justin Pritchard of the AP, in an article appearing (here) in USA Today in September of 2008:

“The New York state health department and the USGS tested the source of the city’s water, upstate. They found trace concentrations of heart medicine, infection fighters, estrogen, anti-convulsants, a mood stabilizer and a tranquilizer. City water officials declined repeated requests for an interview. In a statement, they insisted that “New York City’s drinking water continues to meet all federal and state regulations regarding drinking water quality in the watershed and the distribution system” — regulations that do not address trace pharmaceuticals.”

In a press release from the City of New York appearing in May of 2010 entitled DEP Study Shows No Risk from Pharmaceuticals and Personal Care Products in NYC Drinking Water, the City claims that the concerns regarding these contaminants are unfounded. But when one reads on, it is apparent that this testing was anything but comprehensive.

According to the release on the City’s web site, “The cost of the testing was $81,000,” and was conducted in a “one-year pilot testing program.” Compare this with the $102 million Mayor Bloomberg spent on his re-election campaign or the City Time project that resulted in over $700 million in spending and $80 million being stolen from the city and the study seems woefully inadequate. Furthermore, there is no way to know what long term effects of such contamination will be without long term studies.

The inadequacy of the study is also highlighted by the fact, shown in the DEP’s table here (roughly midway down the page), that the study was looking at the amounts of these contaminants that it would take to reach toxic levels in a one-time exposure rather than the cumulative effect and the inability if the body to properly manage increasing levels of the contaminants over time, which is misleading and does not represent a thorough examination of the threat.

Industrial Gas Drilling, another threat mentioned by the River Keeper, is also a major concern. As highlighted in the Academy Award nominated documentary Gasland by Josh Fox, the process of Hydrolic Fracturing – a method of extracting natural gas by pumping a chemical concoction below the earth’s surface in order to release the gas – results in widespread water contamination to the water table and surface water. Gas companies have been lobbying New York State in an attempt to use this method to get at the gas located in the Marcellus Shale for some time. According to Riverkeeper, “The entire West-of-Hudson portion of the New York City Watershed (supplying 90% of drinking water to over half the state’s population) sits on top of part of the Marcellus Shale.”

While this is a major concern for the future, it seems the water is already contaminated.

An article appearing in Novemeber 2010 on CBS entitled, City Officials: Tap Water Shows Elevated Lead Levels, suggested that residents run their tap water for 30 seconds before drinking or cooking with it because of lead contamination. The report also states, “The levels that were detected, which were very slightly above the action level that the EPA defines, don’t pose any clear public health risk,” said NYC DEP Commissioner Cas Holloway.” The article continues, quoting Dr. John Rosen of Montefiore Hospital, an expert in lead poisoning among children, “When it comes to lead, it’s always better to be safe than sorry because according to the U.S. CDC, [and] according to the U.S. EPA, there really is no level of lead that’s safe in children.”

It is of even greater concern that large amounts of toxic chemicals have been discovered in the New York City Water. According to the Environmental Working Group, a not-for-profit public research and advocacy group, between 2004 and 2009 tests showed widespread contamination of drinking water around the country. According to the EWG:

“This drinking water quality report shows results of tests conducted by the water utility and provided to the Environmental Working Group (EWG) by the New York Department of Health- Bureau of Public Water Supply Protection. It is part of EWG’s national database that includes 47,667 drinking water utilities and 20 million test results. Water utilities nationwide detected more than 300 pollutants between 2004 and 2009. More than half of these chemicals are unregulated, legal in any amount. Despite this widespread contamination, the federal government invests few resources to protecting rivers, reservoirs, and groundwater from pollution in the first place. The information below summarizes test results for this utility and lists potential health concerns.”

A list of the contaminants exceeding health guidelines can be found here. In the New York City water tested there were eight contaminants that exceeded health guidelines, including Dichloroacetic Acid, Chloroform, Bromodichloromethane, Trihalomethanes, Haloacetic acids, Trichloroacetic acid, Bromoform, and Dibromochloromethane. In the report page for the testing result the EWG also includes an EPA violation summary, which for New York City states, “No violations were reported for this system since 2004.” This suggests that the testing requirements and chemicals considered are superficial at best.

The problem with all of these contaminants, particularly in aggregate, is that – similar to pollutants overwhelming the assimilative capacity of the environment – a concoction of pollutants including hormones, lead and the described chemicals can overwhelm the capacity of the human body, even in trace amounts, to deal with them over time. The levels recorded, however, are not even acceptable according to EPA standards, which are often very lax in that they do not use the premise of the precautionary principle. The precautionary principle errs on the side of caution and puts the burden of proof on the polluters and chemicals used. The EPA, however, considers both innocent until proven dangerous rather than using precaution when there may be reason for widespread public health concerns. The EPA, as described above, also often takes into consideration danger related to quantities associated with a single exposure rather than what occurs in actuality, daily lifetime exposure.

Maybe it is time to reconsider whether New York City really has “world-renowned water quality” and what the cumulative effects of exposure to these contaminants means for its over 9 million residents.

This article was originally published on Cogent Politics.