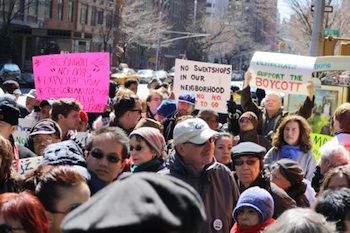 The “Sweatshop Free Campaign” was organized by the workers’ rights group Justice Will Be Served! and urges neighborhood businesses to sign a pledge promising to uphold fair labor practices and comply with employment laws.

The event took place in front of Saigon Grill, a Vietnamese restaurant with a history of labor violations and one that is currently embroiled in another conflict despite new ownership.

On the heels of the centennial anniversary of the Triangle Fire that killed 146 workers in New York City, crowd members yelled “no more sweatshops!” and “sign the pledge!” at the rally attended by workers, students and community groups. New York State senator Tom Duane and New York City council member Gale Brewer were also among the several elected officials who spoke at the event.

“It’s a shame that 100 years later, we are still fighting some of the same battles here on the Upper West Side,” New York State Assembly member Linda B. Rosenthal told the crowd. “However, it doesn’t seem like this Saigon Grill management or the previous one wants to pay attention to the law.”

The restaurant has had a tenuous history with its workers. In 2008, a federal judge found the former owners of the restaurant – Simon and Michelle Nget – guilty of wage and overtime violations. The judge ordered the owners to pay $4.6 million dollars in back payments and damages to the entirely Chinese immigrant delivery workers, who worked 72 hours a week and earned less than $2 an hour. This past January, Mr. Nget was sentenced to three months jail.

As of 2008, there were 170,800 people employed by restaurants in New York City, many who whom are immigrants and workers of color. But excluding tips, working in the food service industry ranks as one of the lowest-paying jobs in the country, according to the Bureau of Labor. In New York City, the average annual wage for restaurant workers in 2007 was $24,537, according to city data. Labor violations such as illegal deductions, non-payment of wages and employer retaliation against organizing are common.

At Saigon Grill, the eatery has been under new ownership since it re-opened last October, but employees accuse the new management of age discrimination and retaliatory practices after attempting to organize, according to a January complaint filed by the 318 Restaurant Workers’ Union on behalf of the workers.

Thirty-year-old Jerry Weng says he was hired by the new owners soon after re-opening but he and several of his newly hired colleagues were dismissed after two days when they spoke up against his employer. Weng says the new owners, brothers Bei Lin and Qiao Lin, planned to fire some employees over 50 for being too old.

“He [the owner] was complaining about my co-workers are too old. I said, ‘Look, this is illegal, [if] you discriminate against the age.’ Then they just fired us too,” Weng told In These Times.

The complaint also alleges the owners engaged in tactics to fire workers, reduce tips and change work schedules for those who tried to unionize. The fired workers and their advocates have been pushing for a boycott and have been picketing outside the restaurant five-days a week since last November.

Rui Wang, assistant manager at Saigon Grill, denied the sweatshop and age discrimination allegations. “This is a restaurant, not a sweatshop,” said Wang. “Everything we do here is legal. Everything is done by the bank. Every week [workers] get a salary. They get a check.”

The labor conflict has seemingly worried many of the long-time employees of the restaurant. Recently, most of the workers at Saigon Grill voted to unionize with the Local 713 of the International Brotherhood of Trade Unions.

Ewan Zheng, a waiter who has worked at the restaurant for five years, fears the picketing could cause the restaurant to close, leaving him and his co-workers unemployed. He said he joined the union in part because it offers job security.

“The American union told us, we unionize this restaurant, we can keep our job. Under their help, there’s a lot of benefit for us.”

But critics of the Local 713 IBOTU point to the tenuous past of the union officials, Perry and Richard Scalza. The two brothers were former officials for Local 819 of the International Brotherhood of Teamsters but were barred from the union in 1994 for financial misconduct after allowing friends and family to join the local to obtain low-cost health insurance.

Tracy Kwon, an organizer with Justice Will Be Served!, says the owners are playing into workers’ fears. She said the owners are telling the workers to unionize with the management-backed Local 713 in order to prevent the picketers from taking their jobs.

“From the get-go, the owners have used the division between workers. But they also have economic control over the workers inside,” she said. “At the same time, they’re silencing workers inside saying if you don’t vote for this union, you’re going to lose your jobs.”

Perry Scalza, business agent for Local 713, says picketers are trying to discredit the union, and adds that the Saigon Grill workers are involved in the contract negotiations with the owners.

“We don’t do anything that the people want us to do. They’re the ones that made up the contract,” he said. “If they don’t approve, it doesn’t get done.”

While the labor strife at Saigon Grill continues, the organizers announced at the rally that eight businesses in the area agreed to support the “Sweatshop Free” pledge. Each place will receive a sticker to display in the storefront window.

In the meantime, Weng, who has almost a decade of restaurant work experience, continues to split his time between part-time work and picketing every week.  He said he is currently seeking work elsewhere, but adds that it has been difficult to find work since many employers in the industry frown on labor organizing. But that doesn’t appear to stop him.

“Even if I find a job, I will still come here,” said Weng. “If you let the things happen here, the Upper West Side conditions are going to be dragging on.”