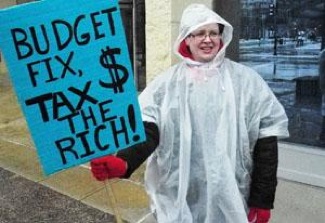 The U.S. government budget deficit is now $1.5 trillion, and political leaders in most states are wringing their hands and crying in unison: “There’s just no money.”

Led by Republicans, the only solution, they say, is to cut, cut, cut. And while they push draconian cuts in education, health care, pensions, public workers, Social Security, and Medicare, they also attack the one social group that’s had the clout to achieve and protect these gains—the unions.

Workers’ pensions are not the cause of the economic crisis hitting Wisconsin and other states. That crisis, of course, stems from the crash in the economy that started with a massive Wall Street scam. Financial firms packaged toxic mortgages and sold them to pension funds and other investors as good investments. Their fraud dragged everyone down.

Wall Street has recovered. The New York State comptroller reports its profits are up by 720 percent since 2007. How can there not be enough money for needed social services?

Actually, there’s tons of money. Billions of dollars. The problem is that it’s not available to meet everyone’s needs because the giant corporations and the rich have taken it.

There is no way the rest of us can make up the difference. The only solution is to get the money where there’s a lot of it: by raising taxes on corporations and the very rich. These millionaires and billionaires live better than kings because they’ve hogged so much wealth from our nation and others.

In 2007, the 400 wealthiest people in the U.S. owned $1.5 trillion. The top one percent own more wealth than the bottom 90 percent of us, according to the Working Group on Extreme Inequality. A tax on them and on the 7.8 million people who are millionaires could stop the financial hemorrhaging.

They Used to Pay

At one time, corporations and the rich paid a good chunk of their fair share. For most of the time from World War II till 1960, the individual tax rate for wealthy Americans was 91 percent, under both Franklin Roosevelt, a Democrat, and Dwight Eisenhower, a Republican. Today, a millionaire pays 32.4 percent, but for many it is actually much lower due to the proliferation of tax loopholes.

In the 1950s, corporations paid a basic tax rate of 53 percent, and our economy was booming. No longer. Corporations in 2011 are taxed at 35 percent, based on “taxable” income.

But many pay much less because of a welter of corporate deductions, exemptions, and even tax refunds. Research from a New York University economist shows the effective tax rate for the pharmaceutical industry is just 5.6 percent. For the biotech industry, it’s even less—just 4.5 percent.

Even with these great savings, U.S. corporations scream that their tax rates are too high for them to compete in the global economy. Their tax rate was lower than that of 24 other countries in the world in 2008, according to Citizens for Tax Justice.

Corporate America has been hugely successful in its half-century campaign to slash corporate and individual taxes on the rich. That’s a major cause of our problems today. Some of the most right-wing companies and their owners, like the billionaire Koch brothers of Koch Industries (who fund the Tea Party movement), want to eliminate both corporate and individual income taxes altogether. Apparently, they could care less whether teaching, firefighting, street cleaning and other essential services survive.

Koch Industries, with sales of more than $100 billion in 2008, is privately owned and its tax information hasn’t emerged. But Koch Industries has set up a number of legal entities within the company that are exempt from paying taxes.

Other giant corporations have used these tricks and others to get their taxes to zero. Some even receive refunds from the IRS, including Exxon Mobil. It paid no taxes to the IRS in 2009 and got a $156 million refund. Exxon Mobil CEO Rex Tillerson took home more than $27 million that year. He makes in a week what would take an average Exxon Mobil worker a lifetime.

Executives in turn make big financial contributions to candidates of both parties, especially to Republicans. It’s little wonder they reward their corporate sponsors by attacking unions, public workers’ pensions, Social Security, and Medicare—and too many Democrats, including Obama, so far, have been more concerned about pleasing Wall Street than fighting for workers. It was good to see the Wisconsin senate Democrats leaving the state to avoid voting on the governor’s anti-labor, anti-people bill.

Charles and David Koch, the Tea Party’s wallet, are worth $21.5 billion each, according to Forbes magazine. Their goal, as stated by their right-wing, anti-labor think tank, the Cato Institute, is to eliminate all unions from the U.S. completely. If they are successful, that would be the end of the major defender of all the social programs. The war on Wisconsin public workers and their unions is the latest escalation in the Koch brothers’ campaign.

Cutting workers’ pensions and destroying their unions won’t balance any budget. But raising the tax rate on the ultra-rich, and on big corporations and banks, will.