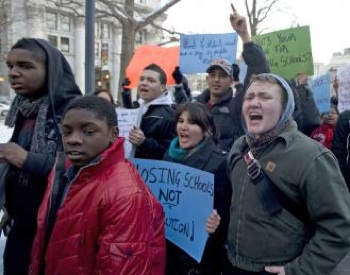 A new round of attacks on public schools in New York City has sparked a growing movement against the neoliberal plan for public education and the false reform agenda of privatization, union-busting and testing promoted by Mayor Michael Bloomberg and his new Schools Chancellor, Cathie Black.

Throughout January and February, the Panel for Educational Policy (PEP)–a puppet body with a majority of mayoral appointees–met to vote on the closure of 24 schools in New York. Ninety schools have already been shut down since Bloomberg took office.

Many of the 24 schools on the list this year were the same ones saved from closure by a United Federation of Teachers (UFT) lawsuit against the city’s Department of Education (DOE) last year.

More than 2000 parents, teachers, students and community members showed up to a PEP hearing on February 3 to protest the closings, the invasion of charter schools and the new chancellor. Like last year, the UFT organized a pre-meeting rally that drew educators from all over the city. The crowd was smaller than some expected, partly due to the fact that the rally was scheduled for Tuesday and moved due to weather.

Once inside, though, the energy of protesters was tangible. People waited anxiously in their seats, whistles were passed along the aisles and banners held aloft, until finally some attendees began the chant “Save Our Schools!” Once the chant began, it didn’t stop as PEP members filed in and tried to introduce themselves. The crowd quieted only to hear the introduction of Patrick Sullivan, a PEP member who had previously voted “no” on closures.

Black’s introduction was drowned out by boos and shouts of “Black Must Go!” that communicated more anger and frustration than any other chants of the evening.

One by one, speakers took to the microphone, with the crowd quieting to hear them. Several city councilmen, a state senator, the UFT president, and numerous teachers, parents and students spoke out against the closings.

Speakers accurately described the school closings as racist and laid bare the DOE agenda of privatization of public schools. RaeVaughn Williams, a Posse Scholar winner from the Urban Assembly Academy of History and Citizenship for Young Men (UAAHC) in the Bronx, described school closings as “academic lynching.”

UAAHC is slated to close within three years. It serves young men of color in 9th to 12th grades and has a graduation rate of 55 percent, which is twice the city’s average for young men of color. Carmel Macklin, a teacher at the school, predicts UAAHC will be replaced by a charter school once it is closed and spoke about the connection between privatizing the school systems and the prison system. “It’s a school-to-prison pipeline most of the time,” said Macklin.

The school’s most recent grade from administrators was an F, but for the past two years, it received a B. Macklin said the DOE doesn’t compare graduation statistics with those of other vulnerable populations, comparing them instead with the graduation rate in the city at large.

The radicalization of the audience was also apparent in the various mentions of the Egyptian revolution. UFT President Michael Mulgrew compared Bloomberg to former Egyptian dicator Hosni Mubarek, and one speaker yelled, “If we have to rise up like Cairo to get you to listen, we will!”

At about 7:30 p.m., one student from a school set to close stepped up to the microphone and read a prepared statement. The end of her statement was a signal for a large group of organized students to begin a walkout. Chaos took over the auditorium as people marched up the aisles to drumming, chanting and noise-making. A large group of protesting students remained inside, bringing the meeting to a standstill for more than 20 minutes. The UFT joined the walkout, in effect refusing to acknowledge the legitimacy of the panel.

While some community members did stay and the meeting did eventually continue, the walkout marks an important shift in the public’s understanding of the PEP and the school closure process. A statement from City Council member Charles Barron sums it up: “You will let us scream until we get hoarse, and then we know what will happen–you’ll shut all our schools down.”

That is, in fact, exactly what happened. However, school officials now face an increasingly mobilized public that recognizes the farce and is ready for a fight.

The outrage at the PEP meetings is part of a broader wave of activity at the grassroots and a promising sign of unity among the typically fractured opposition within the UFT. One particularly important development is the launching of “Fightback Fridays” at several dozen schools around the city.

In addition to these regular demonstrations, on January 27, a rally initiated by grassroots education organizations was called outside the Tweed Courthouse where the DOE is headquartered. Despite a blizzard that resulted in school cancellation and doubtless lowered the turnout, more than 300 teachers showed up to protest closures.

In a surprising turn of events, a UFT resolution to endorse the January 27th rally was passed with a strong majority at January’s delegate assembly. Under normal conditions, proposals not initiated by the leadership are ignored or denounced.

Several factors have combined to push the UFT leadership to adopt a more defiant tone. Most important is the pressure from the rank and file, with organizational expression from groups like the Grassroots Education Movement, Teachers Unite and the New York Collective of Radical Educators. These groups have taken the lead in fighting against closures with public demonstrations.

In addition, permanently stalled contract negotiations and the failure of the UFT’s legalistic strategy to halt closures in any meaningful way is prodding the union leadership to act.

In 2008, when Bloomberg ran for a third term, the UFT refused to endorse his opponent Bill Thompson, despite that fact that such an endorsement might have tipped the election away from Bloomberg, who won by a narrow margin despite massively outspending his opponent. At that time, the leadership seemed to believe that Bloomberg could still be negotiated with, and therefore didn’t want to alienate him. It’s increasingly clear, however, that Bloomberg is not a negotiating partner and is only interested in extracting concessions from teachers.

Finally, there is a crisis of legitimacy for Bloomberg and his running of the school system, most obviously manifested in the various scandals surrounding his outgoing Chancellor Joel Klein and the outcry around his appointment of Cathie Black, a publishing mogul with no experience in education and no history with public schools.

The image of Black, a clueless socialite and Bloomberg crony–who speaks contemptuously of ordinary people by suggesting that the solution to overcrowded schools and class sizes is more birth control–has become the target of much popular indignation.

The recent demonstrations in Wisconsin are another example of the importance of rank-and-file activity. When teachers in Madison and other districts across the state carried out a sickout, American Federation of Teachers President Randi Weingarten felt compelled to rush to Madison directly from Education Secretary Arne Duncan’s “collaboration” conference in Denver.

Leaders like Weingarten and Mulgrew will find themselves forced into more oppositional positions when faced with grassroots action.

In the current climate of austerity, unions and public schools are increasingly finding themselves in a fight for their very existence. The walkout at the PEP hearing and the mass demonstrations and occupations of the Wisconsin Capitol building have begun to raise the question of civil disobedience.

More and more people are recognizing the deeply anti-democratic nature of the DOE in New York, and there are few illusions anymore that we can stop school closures through “speaking truth to power” alone. Activists must begin discussing how we can move from protest to resistance–to mass non-compliance and direct action in order to save our schools.