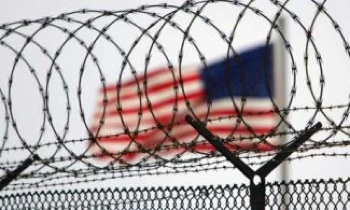 In the nine years since the opening of the Guantánamo Bay detention facility, the country has moved incrementally towards institutionalising the existence of the facility. On Monday, the Obama administration took the process of institutionalization one step further, issuing both an executive order on detention – the first since the pathbreaking executive order that began his presidency, calling for the closure of Guantánamo and promising a rethink on the detention policy – and the revocation of the ban on military tribunals there.

In contrast to its predecessor, yesterday’s executive order was anything but pathbreaking. It tacitly acknowledged that the premises of detention in the “war on terror” begun by the Bush administration in the fall of 2001 still hold. More tellingly still, it demonstrated that the Obama administration now not only accepts the fact of Guantánamo’s existence as a given, but has also abandoned any debate over whether or not indefinite detention should be the policy of the land.

Under this new detainee review plan, the blueprint set out nearly a decade ago remains. At the outset, the underlying rationale for detention at Guantánamo Bay rests upon the September 2001 Authorization to Use Military Force (AUMF). So, too, as decreed in the November 2001 Military Order, the department of defence remains the lead player in implementing the guidelines of the executive order, although “consultation with the attorney general” is prescribed. In terms of the procedures for review of the cases, those, too, are essentially new and updated versions of those that constituted the administrative review boards and the combatant status review tribunals, in which each detainee’s status was reviewed and chance for trial or release assessed. The justification for continued detention is familiar also – to wit, “to protect against a significant threat to the security of the United States”.

Admittedly, the executive order requires certain measures of fairness going forward: for example, guaranteed advance notice to each detainee about his pending review, information about the factors in the detainee’s case, access to a personal representative, and a defence that can include statements, information and witnesses. Moreover, the review process will now be every three years, with six-month file reviews of each case in the interim. The review board must make “prompt determination” on each case.

Even these reforms, however, are merely a formal statement of what has developed over time at Guantánamo. In sum, then, the basic premise of this new executive order is that the Obama administration has created as rational and fair a system of detention and review at Guantánamo as is possible.

In light of these reforms, it is no surprise that the administration on Wednesday also repealed its two-year ban on military tribunals at Guantánamo Bay. As in so much of the administration’s response to Guantánamo, the basic explanation for their policy decisions is that they “had no choice”. In the case of the military tribunals, the administration announced plans in 2009 to try some cases in federal court and some at Guantánamo. Both Congress and public opinion have made that seemingly impossible. Congress has voted not to fund any transfers of detainees to the country, and the public reaction to the trial of Guantánamo detainee Ahmed Ghailani – acquitted on 284 counts, but sentenced to life without parole on just one charge – has demonstrated that when it comes to justice, the American public is not content to risk any repetition of what was widely (mis)perceived as a not guilty verdict.

The Obama administration’s basic premise in both the new measures is that they have thought carefully for two years about how to resolve the remaining 172 cases at Guantánamo. The result of these deliberations is that they have devised an improved bureaucratic structure both for deciding whether or not to try these individuals and for mounting their trials. But the fact is that no technocratic reform of procedure can address the central problem of Guantánamo. It is not philosophically or morally possible to make better the indefinite and extra-legal detention of individuals who have not been formally accused of a crime or who are not detained under a category recognized by international law.

Guantánamo began without the concern for distinguishing guilt from innocence. Over nine years, two administrations have grappled with the initial mistake of not determining the status of those who were brought to Guantánamo in the first place. In the new review process outlined by the president, an acceptance of the inability to make that distinction lingers. The military commissions process may seem like a solution. But it may very well not be. Out of a total of 800 detainees, there have been six convictions in nine years at Guantánamo Bay. Bringing charges against Guantánamo detainees remains an elusive goal.

This week’s announcement – a list of procedures with no attempt to address the fundamental moral, legal and philosophical dilemma that underlies Guantánamo as much now as on the day it opened – is merely bureaucratese for the fact that Guantánamo, and all that it represents, is here to stay.

This article was originally published on CommonDreams.org, from The Guardian (UK).

Karen Greenberg is the Executive Director of the Center on Law and Security at the New York University School of Law. Her latest book, The Least Worst Place, Guantanamo’s First 100 Days (Oxford University Press), has just been published. She is also the co-editor of The Torture Papers: The Road to Abu Ghraib, among other works.