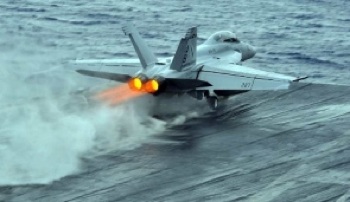 Our founders would be appalled that a President of the United States could launch the country into an armed conflict half a world away without a formal declaration of war by Congress, much less barely any discussion of it by the House or by the Senate.

Article 1, Section 8, of our Constitution is unambiguous: Only Congress has the authority “to declare war.” James Madison warned that allowing the President to take the country into war would be “too much of a temptation for one man.”

At this point in the warping of our system of checks and balances, a President can wage war almost whenever he feels like it — or at least whenever he can cobble together some “broad coalition,” as Obama put it, or a “coalition of the willing,” as his predecessor put it.

Sounding just like George W. Bush when he attacked Iraq exactly eight years ago to the day, Obama said that military action against Libya was not our first resort.

Well, it may not have been the first resort, but it sure is Washington’s favorite resort.

We, as Americans, need to face facts: We have a runaway Executive Branch when it comes to warmaking.

And Obama appears naïve in the extreme on this one.

It is naïve to expect U.S. involvement in this war to be over in “days, not weeks,” as he said.

It is naïve to expect that he can carry this out without using ground troops.

It is naïve to wage war that is not in response to a direct threat to the U.S. national security.

It is naïve to expect millions of Libyans to cheer as their own country is being attacked by Western powers.

It is naïve to expect civilian casualties not to mount as a result of his actions, which he said were designed “to protect Libyan civilians.”

And it is naïve to expect the world to go along with the ruse that this is not a U.S.-led act of aggression.

Finally, Obama’s stated reasons for this war, which he refuses to call by its proper name, are hypocritical and incoherent.

He said “innocent men and women face brutality and death at the hands of their own government.”

That’s true of the people of Yemen, our ally, which just mowed down dozens of peaceful protesters.

That’s true of the people of Bahrain, our ally, which also just mowed down dozens of peaceful protesters.

Then there’s the kingdom of Saudi Arabia, our chief Arab ally and a repressive government in its own right, which just rolled its tanks into Bahrain.

In the Ivory Coast today, another country on good terms with Washington, a dictatorial government is brutalizing its people.

And a brutal junta has ruled the people of Burma for decades now.

There is no consistent humanitarian standard for Obama’s war against Libya. None whatsoever.

Obama has now pushed the United States to a place where we are now engaged in three wars simultaneously.

He’s a man, and we’re a country, that has gone crazy on war.”

Matthew Rothschild is the editor of The Progressive magazine. This article was originally published on TheProgressive.org.