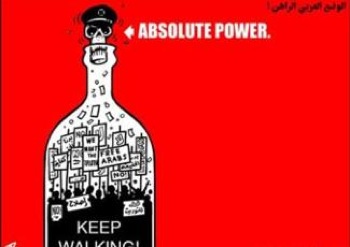 Although predicted by few, the current upheavals in several Arab countries reinvigorate commonplace perceptions of the countries and peoples in the Arab world and the Middle East at large as constituting a densely intertwined, interconnected and bounded region. When Tunisian protestors expelled their dictator, parallels were quickly drawn with Mubarak’s rule in Egypt, prompting mass mobilization there and causing a similar exit of this country’s long-standing ruler. In their wake, anti-regime protestors in other Middle Eastern countries equally felt a rare momentum for change. With varying results, they scrambled to get rid of their own rulers’ deeply engrained authoritarian tendencies or, when the latter failed at all to listen, to push for the overthrow of entire regimes. By taking inspiration from fellow activists in neighbouring countries and by observing resemblances in authoritarian governance, barriers of fear have been tumbling down region-wide. Such remarkable moments of regional ‘contagion’ match the frequently observed inter-Arab interconnectedness at both state and society levels. Paul Noble (1991, 2010) described the region historically as “a vast sound chamber in which currents of thought, as well as information, circulated widely and enjoyed considerable resonance across state frontiers”. Yet it is much less clear under what conditions this regional sound chamber resonates loud calls for democratic change, as is the case today, or, in contrast, when it plays the tunes of authoritarianism. As Myron Weiner (1996) put it more generally, regional contagion often results in “bad neighbourhoods” marked by conflict, instability and authoritarianism. But “neighbourhood effects” equally have been argued to serve as a force for ‘good’ – a recurring theme in the literature on the ‘third wave’ of democratization.

For long the Arab region, and with the increasingly prominent role of especially Iran, the Middle East, has been described as highly interconnected and intertwined as cross-border flows of ideas, networks and conflict fused the boundaries between intrastate politics and conflicts to the extent of blurring them into one larger imbroglio. Arguably, both the extent and the nature of state border permeability and the region’s penchant for transnationalism played a contributive role in the building, reinforcement and consolidation of what Nazih Ayubi (1996) called the region’s “fierce” and deeply authoritarian states. State-endorsed Arab nationalism helped facilitating authoritarian governance as regimes used it to garner popular support and discredit domestic rivals, to justify administrative reshuffles and purges, to enlist crucial support of prospective Arab ‘unity’ partners, to extract rents from oil-producing states, and to justify emergency legislations. (Leenders 2010) In turn, border permeability and local reverberations of the region’s perpetual crises including the Arab-Israeli conflict gave impetus to the building, maintenance and enhancement of security apparatuses and national armies. Regional intricateness of politics and conflict also helped the discursive framing of state violence and repression as sometimes entire communities were branded as foreign agents due to real or perceived cross-border linkages. In addition, increasingly resilient regimes replicated repressive strategies tested by their neighbours in what Heydemann (2007) called processes of “authoritarian learning”. Arab secret police officials exchanged notes at regional workshops as recently as October and December 2010, respectively in Cairo and Tunis. They finessed their grim teamwork by establishing institutions such as the ‘Arab University for Security Sciences’ in Dubai. Jointly, such manifestations of transnational or cross-regional interconnectedness produced important resources, strategies and rationales contributing to authoritarian state building for decades.

By the early 1990s, both physical and discursive cross-regional or transnational linkages had begun to show changes in that they appeared to acquire ‘privatized’ features and to slowly escape full control by authoritarian state elites. Of course, grassroots Islamist networks, of various tendencies, had pioneered in this respect as both their organizations and ideas reverberated throughout the region. Yet the supposed Islamist threat bore the full brunt of state repression, made possible by authoritarian regimes’ successful efforts to declare themselves the last line of defense against religious extremism and chaos. In response to the relative retrenchment of the state associated with selective economic reforms, private networks also began to proliferate in business circles, as the super-rich extended their reach regionally by building shopping malls, holiday resorts and buying up real estate in neighbouring countries. Yet these networks for now continued to depend on and reinforce authoritarian regimes molding private markets into restricted arenas of business privileges. Although in this context of privatizing cross-regional linkages various measures of “authoritarian upgrading” (Heydemann 2007) seemed to keep the potential of anti-regime challenges in check, some scholars expressed doubts that this could be sustained indefinitely. For example, Bassel Salloukh and Rex Brynen (2004: 5-6) suggested that authoritarian states in the region were under threat because “the fodder for [the region’s] permeability is … changing” and that “in contrast… to the regionalized permeability from above of past decades, the new permeability is from below”.

Indeed, important changes in the qualities and platforms of Arab nationalism proved much harder to contain, repress or co-opt. Since authoritarian state ideologies of pan-Arabism had been abandoned –as their appeal had worn out, because consolidated state elites no longer needed them, or because real foreign policies blatantly contradicted them —Arab nationalism had been declared dead despite evidence that throughout the late 1970s and 1980s a strong sense of Arab solidarity and regionally framed perspectives continued to grasp the imagination of large Arab audiences. Since the 1990s, Arab nationalism experienced a revival as it found an effective platform in the rising importance of Arab new media. This prompted several scholars (e.g. Valbjorn 2009) to observe the rise of a “new Arabism” and “a new Arab public sphere”, now largely carried by non-state actors and shared by large audiences. In addition to selectively appropriating some traits of the otherwise obsolete Arab nationalism once endorsed by states, the new Arabist sound chamber provided constant reporting and debates on human rights violations, corruption, socio-economic inequality and other authoritarian excesses. No less important, however, was the growing mismatch between regimes’ foreign policies –their alignment with the increasingly interventionist U.S. and their silence on Israel’s repression of the Palestinians —and Arab public opinion. Accordingly, domestic audiences increasingly appeared to be turning their reinvigorated Arab ‘imagined community’ against their own authoritarian state elites. National polls ranking the Arab region’s most popular leaders included none of the Arab states’ own authoritarian leaders but instead shortlisted Hizbullah leader Hassan Nasrallah, Iranian President Mahmoud Ahmadinejad, Hamas leader Khalid Mish’al and Venezuelan President Hugo Chavez.

After mounting frustrations with authoritarian rule fostered at both intellectual and popular levels a regionally shared and expressed sense of ‘ajz –an Arabic term denoting impotence, helplessness and incapacitation (Kassab 2010)– it were extremely localized developments in the Tunisian small town of Sidi Bouzid that triggered accruing masses throughout the region to reclaim their karama, or dignity. Arguably, this rapid conversion of popular impotence into demanding repossession speedily travelled throughout much of the region as it rode the waves of the new Arabism. Even if the analogies drawn by protestors with often-distinctive conditions in neighbouring countries derived more of their power from imagination than from factual validity, walls of fear nonetheless came tumbling down thanks largely to this transnational, regional space.

American interventionism and Israel’s obstinate refusal of peace, and indeed other key themes of regional resentment, do not prominently feature in the current rallying cries against Middle Eastern authoritarianism. Indeed, some prominent exponents of the new Arabism, such as the Arab authors of the celebrated UNDP Arab Development reports and the Arab Reform Initiative, although sharing concerns over U.S. and Israeli heavy-handed policies in the region, had already refused to accept regimes’ logic to let these issues silence their calls for democratic governance. As such these regional issues cannot be viewed as having directly caused or propelled the Arab uprisings. Yet authoritarian regimes’ abandonment of these widely shared causes –while indeed their lame or pro-U.S. foreign policies came to be perceived as aggravating them—did cause authoritarian leaders to lose their virtual domination of the region’s transnational public space. The ensuing vacuum provided opportunities seized by the new Arabism. Concurrently, authoritarian justifications and their appeal looked increasingly impotent and in sharp contradiction with the foundational myths of many Arab authoritarian regimes that had been intrinsically connected to anti-imperialism and Palestinian solidarity.

Grasping the current fate of two steadfastly authoritarian regimes in the region, those of Syria and Iran, may be instrumental in understanding how dominating the Arab and by extension the Middle Eastern sound chamber is crucial for the propensity of mass uprisings to effectively challenge or even overthrow authoritarian regimes throughout this region. In contrast to Egypt, both regimes aggressively retained their references and linkages to the region’s transnational flashpoints and their protagonists –including Palestine and Hizbullah and, in Iran’s case, its resistance to real or perceived U.S. hostility. Inadvertently or by design, these regimes made it this way much more difficult for their opponents to seize on the region’s newly emerging public space to make their case for domestic political reform or change. Referring to Syria’s aggressive foreign policies on pan-Arab issues, one Syrian activist lamented to the author a few years ago: “It seems almost impossible to effectively pressure this regime to open up politically as we are constantly overtaken on the left.” Hence, despite sharing similarities with the rest of the region in terms of authoritarian excess and ensuing popular frustrations, both the Syrian and Iranian regime seem able to wither the storm of change not in the least because both managed to cling onto their prominent share of the region’s transnational public space. Given the region’s current turbulence, predictions are especially risky. But as the Middle East’s perpetual regional flashpoints are bound to regain attention, Syrian and Iranian authoritarianism is likely to once again look as if of secondary importance or, worse, ‘normal’ and, to some, acceptable in comparison.