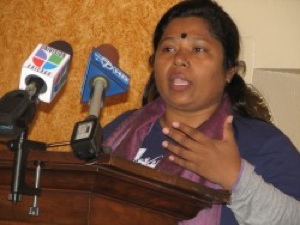 Cynthia Murray and Robert Hines Jr. thought they had seen unfair treatment and bad working conditions at the Maryland Wal-Mart store and Chicago-area Wal-Mart warehouse where they worked, respectively. But they were floored to learn recently of the conditions workers in Bangladesh and other developing countries endure in the factories that produce goods for Wal-Mart.

On the inaugural day of the national “Sweatshop, Warehouse, Walmart: A Worker Truth Tour” in Chicago on Monday, Murray and Hines listened to Kalpona Akter explain how she is facing a potential death sentence or life in prison on criminal charges filed against her and several other organizers with the Bangladesh Center for Worker Solidarity (BCWS), which has fought to improve pay and conditions in garment factories including subcontractors for Wal-Mart.

SweatFree Communities and other groups are asking Wal-Mart to demand the Bangladeshi government drop the charges, which include inciting workers to riot, illegally strike and cause property damage. Akter was arrested and spent a month in jail in August, where she was repeatedly interrogated and allegedly tortured. “They would ask the same questions hundreds, thousands of times,” she recalled during a lunch at the Jobs with Justice headquarters before an event in Chicago Monday afternoon.

There are 3.4 million garment workers in Bangladesh employed at 4,200 factories, supplying clothing for nearly every major store in the U.S. Uprisings by garment workers are common, happening every few days in recent years, according to government statistics, and hundreds of garment workers are injured and some killed each year in such uprisings.

The government vigorously defends the industry with violence and repression. Extra-judicial killings of activists or government critics are common in Bangladesh, often known as “cross-fire” since authorities set up situations where detainees are killed supposedly in shoot-outs with their supporters. Akter said many garment worker activists and their families have been threatened with “cross-fire” killing.

Akter thinks the criminal charges are part of a campaign to completely stamp out the BCWS and other workers groups. Akter was warned of her impending arrest by another organizer who was brutally tortured last summer. She spent days in hiding, but could not bring herself to turn her cell phone off since she wanted to keep in contact with the workers she helped organize. She thinks authorities continually located her through the phone network, and arrested her on August 12 in the middle of the night.

Hines and Murray said that while Akter‘s story makes their situations seem mild by comparison, it motivates them to fight harder for workers rights and let their co-workers at Wal-Mart stores and warehouses know about conditions at the start of the company’s supply chain.

At Jobs with Justice, Akter and another garment worker described how they began working in the factories as children aged 12 and nine, a common practice in Bangladesh. Akter said she would sometimes work 21-hour shifts for 23 days straight, sleeping for a few hours between shifts on a thin mattress on the factory floor, earning only about $6 a month.

By 2006 the minimum wage for Bangladeshi garment workers was $20 a month. Studies showed that was not even enough to provide food with the amount of calories a garment worker would burn on the job. Even local prisoners’ meals cost more.

Garment worker activists, met with extreme repression from company owners and state authorities, gained a minimum wage increase to $43 a month that took effect last year. Considering inflation, it is only a minor improvement upon the past wage and still far from a living wage.

Bangladeshi factory owners have said they can’t pay more and still remain competitive. But World Bank and other studies cited in a report by SweatFree Communities, a campaign of the International Labor Rights Forum, note that Bangladeshi labor is significantly cheaper than labor from Mexico, the Dominican Republic and other countries; and labor only accounts for a small percent of multinational companies’ costs anyway, so retailers like Wal-Mart could easily pay more.

Akter stressed that workers do not want American consumers to boycott Wal-Mart or other retailers – “that would be suicide for us.” Rather they want consumers to pressure companies like Wal-Mart to demand greater accountability including living wages from their suppliers overseas. She noted that companies including Nike and Levi’s have significantly better practices, likely the result of past consumer activism, while Wal-Mart and Target are “on the other end.”

A separate report by SweatFree Communities, called “Sweatshop Solutions?: Economic Ground Zero in Bangladesh and Wal-Mart’s Responsibility,” found that workers at a Wal-Mart subcontractor called JMS Garments in 2007 and 2008 thought consumer pressure had indeed had noticeable effects on working conditions.

Among other things, physical and verbal abuse by managers had declined. But they were still forced to work up to 19 hours a day and threatened with firing for speaking out.

March 25 marked the 100-year anniversary of the infamous Triangle Shirtwaist fire in New York City that killed 146 workers, mostly young women. Akter noted that such fires, with workers perishing because they are locked inside, are still commonplace in Bangladesh, with several disasters of such magnitude happening each year. Between 2006 and 2009 in Bangladesh, 414 workers died in factory fires.

About 85 percent of the workers in Bangladesh’s garment factories are women, so conditions and pay disproportionately affect women. This situation is mirrored in Wal-Mart stores in the U.S., where women make up a majority of lower-level workers.

Today (March 29) the Supreme Court is hearing an appeal over whether to recognize women suing Wal-Mart for gender discrimination as a class. The decision hinges on whether there is enough common in their cases. If the Supreme Court decides the lawsuit can indeed go forward as a class action, as opposed to the women needing to bring cases individually, it will be the largest class action suit in U.S. history.

Murray said she has witnessed gender discrimination first hand, including when two men “walked in the door” at the same salary as the woman supervising them made after five years, she said. Murray earns less than $20,000 a year and can’t afford health insurance.

Hines, meanwhile, alleges he and co-workers were directly cheated out of wages at a Wal-Mart warehouse in the southwest Chicago suburbs, when the temporary staffing agency that employed them allegedly systematically recorded far fewer hours than actually worked. Hines is a plaintiff in a class action lawsuit filed against that company.

“When I called the temp agency to complain, they laughed at me,” said Hines, a member of the group Warehouse Workers for Justice, noting that Wal-Mart’s reliance on temporary agencies is also a problem. “You break your back for them and after you’re 59th or 89th day on the job, you’re fired. Now, I know this isn’t just an internal problem, this is a global problem.”