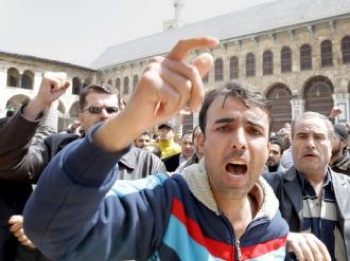 A popular rebellion is shaking the regime of Syrian ruler Bashar al-Assad–and highlighting the hypocrisy of U.S. policy in the region.

After the protests of recent weeks spread further following Friday prayers on March 25, the Syrian regime responded with vicious repression that left at least 61 people dead, and with a belated promise of reform. A spokesman for Assad said that the regime would lift the nearly 50-year-old emergency laws banning protests “soon”–even as troops moved into the coastal city of Latakia, where protesters attacked and set fire to the headquarters of the ruling Baath Party March 26.

In the capital city of Damascus, the regime organized pro-government protests to project an image of popular support for the government, even as protests took places in cities and towns previously considered to be bastions of support for Assad.

British journalist Patrick Cockburn explained the dynamics of the situation:

While Mr. Assad may offer concessions such as ending emergency law, releasing prisoners, giving the press greater freedom and legalizing political parties other than the ruling Baath party, such changes are unlikely to be seen as credible as long as the same people run the army and the security forces. And the ever-creeping death toll is increasing calls for an end to the regime.

The crisis that is threatening to overturn the Syrian government has erupted suddenly over the past week, initially provoked by the security forces in the southern city of Deraa arresting the graffiti-scrawling children. Their detention provoked demonstrations that were met with live fire, and the funerals of the dead turned into vast political rallies.

But in case anyone was expecting the U.S. to respond to Syria’s repression with a Libya-style intervention and a push for a no-fly zone and military strikes, Secretary of State Hillary Clinton went out of her way to explain that Libya was different on a CBS News program:

Each of these situations is unique. Certainly we deplore the violence in Syria…What’s been happening there the last few weeks is deeply concerning, but there’s a difference between calling out aircraft and indiscriminately strafing and bombing your own cities, than police actions which frankly have exceeded the use of force that any of us would want to see.

Translation: The U.S. is afraid that the downfall of the Syrian regime would destabilize the region by making it impossible to negotiate a Middle East “peace” deal that would legitimize Israeli control over the Palestinians.

Although technically at war with Israel for decades, it is an open secret that the Syrian regime is willing to reach a peace deal if Israel would agree to withdraw from the Golan Heights, the Syrian territory seized by Israel in the 1967 Arab-Israeli war.

Hafez al-Assad ingratiated himself with the U.S. during the 1991 Gulf War by joining the U.S.-led coalition that drove Iraq out of Kuwait. His reward from the U.S. was de facto recognition of Syria’s predominant role in Lebanon, a setup that ended only in 2005 after mass protests forced Syrian troops to withdraw.

Since then, Bashar al-Assad has tried to cast himself as a reformer, and the U.S. has responded by trying to lure the Syrian ruler away from his country’s alliance with Iran. “Last June, the State Department organized a delegation from Microsoft, Dell and Cisco Systems to visit Mr. Assad with the message that he could attract more investment if he stopped censoring Facebook and Twitter,” the New York Times reported. “While the administration renewed economic sanctions against Syria, it approved export licenses for some civilian aircraft parts.”

The Obama policy is likely to open up a split in the U.S. foreign policy establishment between those who want to prop up Assad as a “partner for peace” and those who see the opportunity to take down a key ally of Iran. For example, Sen. Joe Lieberman has explicitly called for the imposition of a no-fly zone over Syria.

To try to defend its position of effectively backing Assad, the U.S. will–as it did in Egypt–raise the specter of a radical Sunni Islamist government coming to power in Syria in a sectarian backlash against the minority Alawite religion shared by the regime’s core personnel.

What the U.S. is really against, of course, is democracy, which would give voice to those seeking radical change and almost certainly those opposed to making a deal with Israel. So while the U.S. rains bombs and missiles on supporters of Libyan ruler Muammar el-Qaddafi, the Obama administration merely “deplores” the bloody crackdown by Bashar al-Assad.

Bashar Al-Assad inherited the presidential office in 2000 following the death of his infamous father Hafez al-Assad. Like his father, Bashar has used the pretext of challenging Western imperialism and Zionism as justification for maintaining a police state. But now the half-century rule of Syria’s Socialist Arab Renaissance, or Baath, Party, could be unraveling.

Momentum for the latest demonstrations has been building since late January when Hassan Ali Akleh, following the example of Mohamed Bouazizi in Tunisia, attempted to burn himself alive to protest gubernatorial injustices.

A Facebook page calling for a Syrian day of rage in February became a virtual rallying point for Syrians fed up with the domestic state of affairs. Though initial attempts to hold a Day of Rage were largely unsuccessful due to what Syrians call the “bar of fear,” pent-up emotions among Syrian youth found expression February 17 when over 1,000 people found themselves spontaneously drawn together in Damascus’ Hariqa market chanting, “The Syrian people shall not be humiliated.”

The impromptu protest was triggered when a traffic policeman insulted and beat the son of a shopkeeper. This unprecedented demonstration stunned the regime and sent the interior minister scurrying along with his bodyguards and security apparatus to the scene. The policeman was officially detained, and the minister pledged that the incident would be investigated.

Manifestations of popular unrest reached new heights when protests rolled through Damascus for six consecutive days starting March 15. Though the protesters initially numbered in the hundreds, by the end of the week, there were thousands of people gathering, with reports of demonstrations throughout all regions of the country.

In particular, the southern city of Deraa has emerged as the center of the challenge to Assad. Deraa was the site of several large peaceful demonstrations starting March 18. Security forces attacked the protesters with tear gas and live ammunition killing at least three protesters. The repression continued the next day as security forces fired tear gas on a funeral procession for the fallen protesters.

The attacks infuriated demonstrators, who began setting fire to symbols of the ruling Baath Party. Assad was compelled to call in the military to put down the protests in Deraa. According to media reports, some 44 deaths have been confirmed in that city as the result of protests.

Since then, protests have spread beyond Deraa–and constitute the biggest challenge to the regime since 1982, when Hafiz al-Assad responded to an Islamist uprising by ordering a massacre on the city of Hama, killing at least 10,000 people.

During the Hama massacre, Rifaat al-Assad, the brother of Hafiz Assad, ringed the city with artillery and shelled it relentlessly as collective punishment for criticisms of the government. To ensure a long-lasting culture of fear and passivity throughout the population, Rifaat al-Assad covered the city with hydrogen cyanide to poison survivors.

Given the scale and barbarism of that repression, today’s protests are all the more impressive. They have shattered the illusion of a politically passive Syrian population. Besides demanding the removal of Assad as president, protesters have called for the release of political prisoners and an end to the repressive emergency laws.

The Syrian demonstrators are yet another inspiring example of the new spirit of rebellion sweeping through the Middle East and North Africa. Their struggle deserves our solidarity.