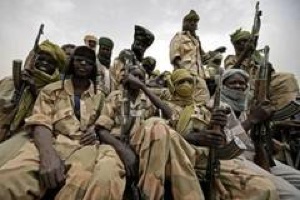 As Libyans rise up against the 41-year-old dictatorship of Muammar al-Qaddafi, one of the most striking claims of state violence has been the hiring of “African mercenaries” to crush the revolt. Like Hosni Mubarak’s “thugs” (or baltagiya in Arabic, terms that gained widespread currency almost instantly), the mercenaries represent the anti-populist face of violence, those who are willing to take to the streets not for reasons of personal conviction or national duty, but for compensation from the embattled regime.

The mercenaries and the thugs provide a contrast to the nonviolent, impassioned politics of the protesters. One point further distinguishes Qaddafi’s mercenaries from both the revolutionaries and Mubarak’s thugs: that they are continuously referred to as “African.” This should be an empty signifier, like saying that European mercenaries were hired to crush a revolt in Spain; after all, Libya is an African country and Libyans are Africans. But those of us who are watching the news know what is “meant” by this, and some reporters have been quick to correct themselves with either “black Africans” or, less frequently, “sub-Saharan Africans.”

Although just one aspect of the current situation in Libya, I suggest that it should give us pause to consider the stakes of this conceptualization of a basic Arab-African or Arab-black antagonism—one that not only formulates these as mutually exclusive categories but also pins them against one another in the context of the Libyan revolution.

This formulation is taking place both “on the ground” in Libya as well as in its representation outside its borders, and the generalized media blackout has severely compromised understanding of the situation. Just a handful of commentators have questioned the veracity of the “African mercenaries” charge while maintaining their support for the uprising.

Evidence of these mercenaries has largely consisted of photographs and video footage of foreign passports and documents, as well as black bodies—both alive and dead, the former inevitably surrounded by angry or even violent protesters. However, there is scant evidence that these people are, first of all, participating in state-sponsored violence against the popular uprising, and, second, were brought into Libya for this explicit purpose. On the contrary, we know that Libya was already home to a significant number of foreign workers—including some two million black African migrant workers. We should also note Libya’s documented history of racial discrimination. Almost one year to the day before the February 17 Day of Anger that jumpstarted the revolution, UN Watch, an independent organization monitoring the UN, issued a statement entitled, “Libya Must End Racism Against Black African Migrants and Others.”

In light of this recent history, the videos and photographs of “African mercenaries” raise disturbing questions. Are the men we see pictured here perpetrators of state-sponsored violence, are they victims of racism, or is it possible that both of these things may be true at the same time? Are they being attacked in retaliation or in the course of a battle, or are they taken for mercenaries simply on the basis of their skin color? Is this just one more instance of non-citizens falling victim to a conflict that is not their own?

Whether or not Qaddafi has recruited foreign mercenaries, it is clear that none of us—in Libya or abroad—are getting the full story. However, the speed with which this charge has been accepted as true should call into question our own assumptions about relations between Arab and black Africans.

This is not the first time that Arab and black Africans have been tragically opposed; rather, this has been integral to policymaking in the United States and beyond, as well as to numerous think tanks and international organizations, humanitarian and otherwise. For a far more extreme example, we can look to Sudan. In his work on that topic, Mahmood Mamdani (2009) has argued that the perceived dichotomy between Arab and black Africans is a false one, relying on colonial-era tropes of settler and native which additionally sought to retribalize and reify Sudanese social (and ethnic) divisions. Mamdani holds that anti-genocide campaigns focusing on Darfur such as Save Darfur depoliticize the insurgency/counterinsurgency by shifting the discourse into the moral realm in order to: 1) link the conflict to the War on Terror; and 2) instigate a military response on behalf of the United States and other Western powers. This move also includes Sudan in the political geography of the Middle East.

But the same narrative techniques of depoliticization play on existing conceptions of Africa and the kinds of problems that Africans, as a generalized populace, encounter. The depoliticization of a counterinsurgency/insurgency in Darfur not only places it in the rank of terrorism; it also situates it among other (supposedly) nonpolitical evils that have besieged the African continent, such as HIV/AIDS, poverty, and innumerable other instances of seemingly interminable, incomprehensible violence.

This is crucial to our understanding of Libya and the question of “African mercenaries” in particular. What we can learn from the framing of violence in Darfur is that Arabs are not considered “Africans” by policymakers, journalists, and organizations, and that Arabs and Africans may be seen by these same groups as fundamentally different, and consequently face fundamentally different kinds of problems—suffering differently, inflicting harm differently, and handling politics differently—in a manner that hinders “our” own consideration of them together.

The story in Libya diverges considerably from that of Sudan, with black Africans and Arabs playing very different kinds of roles. Nonetheless, there is a recurring theme of the antagonism between (black) Africans and Arabs, one that reflects an inability of popular or even scholarly analysis to assimilate Arabs to the African continent. This is the continuation of a Cold War area studies paradigm, as well as a colonial politics of race.

The ongoing revolution in Libya has been rightly interpreted in light of what is now a succession of regional revolutions moving from Tunisia to Egypt and now Libya, with continuing unrest in Yemen, Jordan, Bahrain and elsewhere. The area that is considered vulnerable to this regional unrest stretches at least from Algeria to Iran and has been called the Arab world or the Middle East, despite the fact that Iranians are not Arab and most of Algeria lies west of France. This geography does not, however, appear to reach far south of the Mediterranean, at least where Africa is concerned. Although the two successful revolutions thus far lay on the African continent, there has been an overall failure to consider their effect in terms of sub-Saharan African politics and places such as Gabon, Mauritania, Djibouti, and Uganda.

This is not for lack of substantial historical involvement of these countries in African politics. Libya has long played a critical role with regard to its neighbors, and Qaddafi himself has been heavily involved in African politics. In his February 22 speech, he further reinforced his ties to Africa, calling into question the consonance of something called the Middle East when he claimed that without him, Libya would undergo US occupation or incorporation by the UAE. Additionally, while the Arab League has suspended Libya for its brutal treatment of civilians, the African Union (of which Qaddafi used to be the chairman) has remained silent on the matter.

The use of the term “African mercenaries” points to African-ness as a site of difference. But Qaddafi’s career has been characterized by a loud and memorable involvement in African politics—even taking on the title “the King of Kings” of Africa or in Arabic “malik al-muluk“. This would suggest that if he has deployed non-citizen mercenaries, it would highlight his and Libya’s regional embeddedness rather than its absolute difference.

Given this embeddedness, we may account for the use of the word “African” to suggest “foreign” in a number of ways. One answer would be the radical break this uprising has produced in our conceptions of “Libya” and “Libyans” versus Qaddafi himself, who has until recently been regarded as almost selfsame with his state and people. In contrast with Qaddafi’s African ties, one could argue, Libyans have determined that they will stand in concert with other Arab revolutions.

Although this view might have some truth to it, I want to suggest something else about what I may clumsily call the politics of geopolitics. First, what we should recognize is that terms such as “Africa” and “the Middle East” function not only on the basis of geography or actual political ties, but as stand-ins for racial signifiers. Despite a shared history of European colonialism in its different manifestations, Africa and the Middle East nonetheless bear extremely different histories of representation or historical imaginaries within the European continent (which is, I would point out, also not a continent, but something like a subcontinent).

Furthered by an area studies paradigm that is a remnant of the Cold War, these deeply rooted histories have frankly hindered our understanding of the recent revolutions—especially that of Libya—and even more so of their effect on politics on the African continent. While we stand in solidarity with the uprisings in Libya and beyond, we must nonetheless be more vigilant than ever in critiquing the role that race has played in shaping this revolutionary moment.