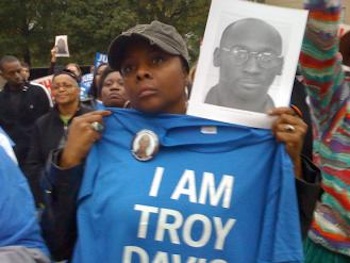 This week, the U.S. Supreme Court refused to hear the appeal of Troy Davis, an inmate on Georgia’s death row–despite overwhelming evidence that he is innocent.

Convicted of murdering off-duty police officer Mark MacPhail in 1989, seven of the original nine witnesses who claimed Troy was guilty have since recanted, with several saying they were coerced by police into making false statements.

In August, after being ordered to review the case by the Supreme Court, and hearing testimony from several of these recanting witnesses, U.S. District Judge William T. Moore Jr., ruled against Troy’s claim that new evidence shows his innocence. And now, the Supreme Court has refused to hear his appeal of that decision.

Here, Martina Correia, Troy’s sister and advocate, describes why the fight to save her brother is far from over.

On March 28, 2011, I woke up elated about my 10-year anniversary as a cancer survivor. I looked outside and it was cold and gloomy, the sun was nowhere to be found. It’s about 9:30 a.m. and the phone rings–it’s my brother Troy Davis’ lawyer and, from the tone in his voice, I knew it was not good news.

My heart sank to a heavy place as I listened to his monotone voice saying, “We just received news that the United States Supreme Court has denied Troy’s appeal.”

Knowing that the appeals for Troy have always been an uphill battle and the lawyers have always stated that from a legal standpoint. Yet today I also heard optimism in the statement, “We will seek and exhaust all legal means available to us.”

I know from a legal standpoint denial by the Supreme Court is nothing a lawyer finds optimism in, yet I felt the readiness for yet another battle.

My first concern was my mother and my brother Troy. I cannot imagine facing three execution dates and the possibility of a fourth. I knew Troy would be more concerned about our family than himself, but I also knew that as much faith and spirituality as my mother has, she is still a mother and we are fighting for my brother’s very existence.

In this fight Troy is no longer voiceless and my family is no longer invisible, yet the court still refuses to hear what we have to say. Innocence does matter and beyond a reasonable doubt should be of utmost.

One thing for certain is that the global concern about this case is growing and yet the highest court in the United States is not willing to address the issue of innocence and new evidence. We live in country that is supposed to promote democracy and human rights for other countries yet it is not unconstitutional for us to execute innocent people in the U.S. if the courts feel they received a fair trial.

I am both enraged and empowered, for this battle to save Troy is a war of life and death for me!

Until there is no breath left in my body I will fight for Troy, fight against the injustice of the death penalty, because this battle is bigger than Troy. It is a war against a system that is not impartial, a system that cares less for fairness and more for finality.

In no way have we ever diminished the loss and hurt of the MacPhail family, yet both families have been victimized. Being a mother and having stage four cancer, I understand the importance of life, and I am willing to give my life to spare my brother’s.

No matter the final outcome of this case, my war against the death penalty is far from over. I will no longer be a victimized by this system in the United States, where justice depends on your ability to pay for it.

The hearing held in June 2010 in Savannah was like a puppet show: it was entertaining to some, upsetting to others. Yet once the judge opened his mouth and looked at my brother with disgust, I knew that no matter what Troy’s lawyers had to present, the judge had already made his decision to deny Troy–so he was just going through the motions like a puppeteer.

I saluted the witnesses, even though they were criminalized by the state prosecutor for recanting their trial testimony. When they testified against Troy all those years ago, the police treated them like heroes–even though they had the same criminal history in 1989. It also seemed amazing that all the police who testified had amnesia about their role in misconduct with the witnesses, yet the judge chose to believe the police over the recanted testimony of the very witnesses they used to secure a conviction and death sentence for my brother.

The Georgia Board of Pardons and Paroles said they will not execute when there is doubt. The case of Troy Anthony Davis is full of doubt.

As Troy said to me, “It’s not over ’til God says it’s over. This fight for justice did not begin with me and will not end with me.”

The battle for justice and the war to save Troy wages on! My name is Martina Correia and I am on death row, because that is where my brother lives. Our lives intertwined.

If Troy is executed he will become even more powerful, because people all around the world are saying, “I AM TROY DAVIS,” and his story will be heard.

What you can do

Marlene Martin’s “Anatomy of a frameup” in the International Socialist Review documents the long history of injustices in Troy’s case. Troy’s sister, Martina Correia, was interviewed in the New Abolitionist in an article titled “The fight for my brother Troy.”

For more information about the fight against the death penalty nationwide, visit the Web site of the Campaign to End the Death Penalty.

This article was originally published on SocialistWorker.org, from TheGrio.com.