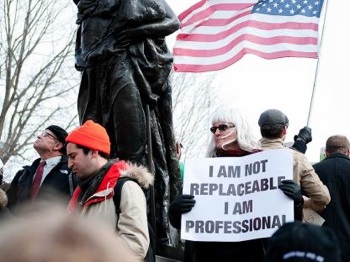 “This [Wisconsin struggle] is, I think, a real test case of, Can America make the adjustments it needs to face a future that is going to a lot less comfortable ….than the recent past has been?” declared influential right-wing commentator David Frum, appearing Sunday on Fareed Zakaria’s GPS Show on CNN.

Frum thus hinted at the enormous stakes for working people and the poor across the United States in the current Wisconsin battle: de-unionization as a step toward further disinvestment in the public sector, trimming away all government functions that serve ordinary families and the goal of greater equality.

The future that’s “a lot of less comfortable” is fated not for those who have steered the Wall Street banks and Corporate America from disinvesting in America’s productive base, shipping millions of jobs overseas. This medicine is, of course, reserved for the victims of disinvestment, not its architects and beneficiaries in the richest 1 percent enjoying record profits, bonuses, and a stunning 24% share of America’s income.

Because of federal and state budget deficits, Wisconsin is the first battleground on whether American citizens will face up to the reality that they must make more sacrifices, Frum argued:

American society is going to go through a great shakedown, and there are going to be squeezes on all kinds of concentrated interests.

Wisconsin Gov. Scott Walker has been very explicit about the identity of those evil “concentrated interests”:

We can no longer live in a society where the public employees are the haves and taxpayers who foot the bills are the have-nots.

Frum left no doubt that he would exempt Wall Street billionaires or corporations exporting jobs from “the squeeze.”

“I don’t see a lot of squeezes on Wall Street yet, David,” countered co-panelist Chrystia Freeland, author a recent superb Atlantic article on the rise of a new, stratospherically wealthy global elite cushioned from economic shocks. But Frum made clear that those at the top were to be spared from the shakedown:

FRUM: Well, that’s maybe not the place to — but look at the healthcare sector where you —

FREELAND: That’s [not the place you should squeeze? I mean, aren’t they the guys who are responsible for the financial crisis?”

But unperturbed, Frum went on to explicitly defend Gov. Scott Walker’s vision of America (although acknowledging Walker’s problems with “style,” not substance). And what is that vision?

It’s a country too bankrupt to provide for the basic needs of the vast majority: good public schools, public investments in roads, bridges, and Internet availability, quality healthcare for all, public job-creation programs, and protections against rapacious employers driving down wages with the threat of off-shoring more jobs.

Government of, by, and for Job Creators

Instead, Wisconsin and America must don what NY Times corporate globalization enthusiast Thomas Friedman calls the “golden straitjacket.” This means offering yet more subsidies and incentives to the “job creators” in the richest 1 percent—despite the fact they have mainly demonstrated their job creation prowess in Mexico, China, and India.

With “pampered” public employees as a convenient diversion for those who have been stripped of healthcare and retirement benefits by corporations using their leverage over employees to the max, right-wing voices continue trying to keep the spotlight away from the role of Wall Street bankers and corporate CEOs in dis-investing in the productive base. (For example, Milwaukee lost 80 percent of its manufacturing jobs between 1977 and 2002, with more losses since then.)

Fortunately, people in Wisconsin and across the nation are gravitating toward the perspective articulated by Chrystia Freeland on GPS: “What we have seen in America in the past 35 years is the people at the very top taking a huge share of the increase in productivity of the nation and the middle class getting squeezed.”

This is being reflected in poll after poll showing the Walker-Frum perspective being rejected. “Poll: Scott Walker losing P.R. battle” was the encouraging headline of Greg Sargent’s recent blog.

More surprising, a poll by the ultra-conservative Wisconsin Policy Research Institute, essentially a local spinoff of the Milwaukee-based Bradley Foundation, found that Walker’s job performance got a 54% disapproval rating among Wisconsin adults, with 43% approving. Among independents, Walker fared even worse, earning a 57% disapproval grade.

Further, his attacks on Wisconsin’s teachers and his proposed dis-investment in public education–he proposes reducing per-pupil spending in the four-county Milwaukee metro area by a whopping average of $598.64—is widely perceived as destructive to the state’s economic future and parents’ aspirations for their children.

Lesson for Obama, Too

How can kids advance in a world where the shrinking supply of good jobs requires high-level skills when schools are losing equipment, facilities and many of the best teachers?

How can the state hope to prosper when the state’s educational system–traditionally one of the nation’s best, outside its pockets of concentrated poverty–is being hacked to pieces? It’s no wonder, then, that Scott Walker has an incredible disapproval rating of 67% among parents with children in school.

Let’s hope that Wisconsin’s 14 fugitive Democratic senators—who are denying Walker a quorum necessary to ram through his union-destroying bill—will recognize that they and the public are winning and hold out for victory against Walker.
Let’s also pray that President Obama and his advisors will recognize that the Republican plan for continued dis-investment in both our public institutions and our productive base is generating mass resistance.

President Obama has the chance to build upon this resistance–emanating from Wisconsin and building across the nation–to fight against federal cutbacks aimed at vital environmental and social protections, such as Social Security, Medicare and Medicaid.