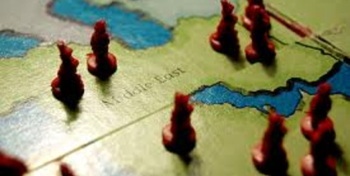 Egypt’s uprising, contrary to most predictions, was initiated and driven by coalitions – including political parties, associations and internet networks – which were dominated by secular and democratic forces. Islamic organisations or their individual members took part on an equal footing with groups of marginal importance before the uprising, and with groups closer to eastern European dissidents of 1989 than to the usual mass parties or revolutionary elites of social revolutions.

The discretion of Tunisia’s Islamist movement can be explained to a large extent by the harshness of its suppression under Ben Ali, impeding the ability of the Islamic Nahda party to act. However, the Muslim Brotherhood in Egypt was also discreet, but for the opposite reason: because it was a party tolerated by the military regime (although not legalised).

Anwar Sadat, when he came to power after Gamal Abdel Nasser’s death in 1970, favoured the Brotherhood’s return to the public stage and its enhanced position as a counterbalance to the Nasserist or radical left. The Brothers fully subscribed to the economic liberalisation (infitah) of Sadat when he embarked on dismantling Nasser’s legacy. This led to increased influence of members of the new Egyptian bourgeoisie within the Brotherhood. Even so, it continued to assert its piety against rampant corruption; this was a key argument for the petit bourgeois, the Brothers’ favourite constituency.

The Brotherhood built itself as a reactionary religious political movement, whose main concern was – and still is – the Islamisation of Egypt’s political and cultural institutions and the promotion of sharia as the basis for legislation. This programme is summed up by its main slogan: “Islam is the solution”. At the same time, the Brotherhood has served as a political antidote to extreme and violent fundamentalist groups.

Sadat continued to play the religious card to legitimise his power ideologically in the face of social and nationalist opposition. He tried to compensate for the impact of the unpopular peace treaty he signed with Israel in March 1979 (less than six weeks after the Iranian revolution) by amending the constitution in 1980, making sharia the “principal source of all legislation”, even though Egypt has a sizeable Christian minority. The concession was not enough to win the Brothers’ support for the peace treaty. So Sadat decided to deal them a stopping blow. In 1981, only months before his assassination by extreme Islamic fundamentalists, he launched a major wave of arrests against the Brothers.

Hosni Mubarak, succeeding Sadat as president, soon released them. At the beginning, Mubarak played it restrained and moderate, in contrast to Sadat’s flamboyant style. He tried in his turn to come to terms with the Brothers in order to win popular support, while perpetuating the controlled freedom introduced by Sadat to check their development.

The Brotherhood’s relations with the regime were strained in 1991 when Egypt joined the US-led coalition against Iraq in the first Gulf war. This was a turning point in relations between the US and its Saudi ally, on the one side, and the regional camp of moderate Sunni Islamic fundamentalism to which the popular Algerian, Egyptian and Tunisian Islamist parties belonged. To the great displeasure of the Saudi monarchy, which had been cultivating links with these parties, they joined the anti-war protest. Their rupture with Saudi Arabia accelerated the repression that struck them at various degrees during the 1990s, with the consent of the US and Europe.

Since the turn of the century, the Brotherhood has been torn between the conservative timidity of its older leaders and pressure from part of its younger members for active demands for political freedoms. It was thus careful not to antagonise the regime, while engaging in democratic and nationalist protest. Its members took part in the protest coalition Kefaya (Enough). This began out of solidarity with the second Palestinian intifada, developed in opposition to the 2003 war against Iraq and established itself as a force fighting against Egypt’s dictatorial government and a likely dynastic succession.

Those Muslim Brothers favouring greater political boldness were encouraged in 2002 by the electoral rise to power in Turkey of the Justice and Development Party (AKP), a conservative Muslim party. Its success in government seemed to confirm the possibility of a model previously thought unworkable. The brutal end of the electoral process in January 1992 in Algeria, and the forced resignation of Necmettin Erbakan in 1997 in Turkey (removed by the army a year after becoming head of government), suggested that the parliamentary route was blocked to Islamic inspired movements in countries where the military stood behind political power.

The new AKP Turkish experience was a change, as both the US and EU gave it their blessing. The Bush administration, after the collapse of the “weapons of mass destruction” pretext that it had given for the invasion of Iraq, took up “democracy promotion” as its prominent policy goal in the Middle East. Encouraged by developments in Turkey, voices in Washington extolled the virtues of a more open attitude to Egypt’s Muslim Brotherhood. Under pressure from the US, Mubarak introduced greater pluralism in the 2005 elections and granted more seats to the opposition, mainly the Brothers. He hoped to demonstrate that free elections in Egypt would benefit the Brotherhood more than any others. A few months later, in January 2006, the electoral victory of Hamas in Palestine ultimatey convinced the Bush administration to give up on democracy in the region, particularly in Egypt.

Barack Obama’s accession to the US presidency, and his speech in Cairo on 4 June 2009 supporting the democratisation of the region (and his snubbing of Mubarak) galvanised Egyptian opposition. After some hesitation, the Brothers associated themselves with the National Association for Change, the predominantly liberal coalition created in February 2010 with Mohamed ElBaradei as its figurehead. But several months later, ignoring the liberal opposition’s calls to boycott the parliamentary elections, the Brotherhood participated in the first round, hoping to retain a good share of representation in parliament. The result meant that it had to boycott the second round. It was left with a single MP (expelled from the Brotherhood for failing to observe the boycott), against 88 in the outgoing parliament.

These elections exasperated Egypt, where 44% live on less than $2 a day, where a greedy, self-serving bourgeoisie flaunt a luxurious lifestyle only matched locally by the rich from the Gulf’s oil monarchies seeking a “One Thousand and One Nights” experience on the Nile. Egypt was a powder keg. Tunisia was the spark. Networks and coalitions of young opposition called for demonstrations on 25 January. The Brotherhood decided not to associate itself with this for fear of the regime, and it wasn’t until the third day that it joined the movement. Its leaders were careful to praise the army, knowing that this hard kernel of the regime would be called upon to resolve the situation.

When Mubarak appointed as vice-president the chief of the Egyptian General Intelligence Directorate, Omar Suleiman, and he in turn called the opposition to “dialogue”, the Brothers’ leadership agreed to meet. This concession, after their refusal to join the initial phase of the protest, contributed to discrediting them in the eyes of the youth leadership (the shabab). When Mubarak finally stood down, the Brotherhood praised the military junta, while demanding the release of prisoners and lifting of the state of emergency, and announced a plan to establish a legal political party.

The Brotherhood got in line to contribute to the “orderly transition” that the US had advocated from the start of the Egyptian uprising. It declared it had no aspiration to take office, and wanted only democratic rights. Essam el-Errian, one of its leaders, explained in The New York Times on 9 February: “We do not intend to take a dominant role in the forthcoming political transition. We are not putting forward a candidate for the presidential elections scheduled for September.” The Brothers “envision the establishment of a democratic, civil state” but oppose the “secular liberal democracy of the American and European variety, with its firm rejection of religion in public life” (1).

During a press conference the same day in Cairo, el-Errian emphasised that the Brotherhood is “against a religious state”, that is, a state run by religious leaders as in Iran, but stands “for a civil state with a religious reference” (2). The Arab term used – marja’iyya – can refer to a legal-theological authority responsible for verifying the compatibility of laws voted by parliament with Islam, and equipped with a legislative veto. This is what the Brotherhood’s draft programme, made public in 2007, envisaged, but it was not formally adopted. It had been criticised in particular for declaring that women and non-Muslims would be barred from becoming president of Egypt.

To secure the Brotherhood’s support, the military named a prominent member – the lawyer and former member of parliament (and author of an anti-secular book), Sobhi Saleh – to its constitutional revision committee. As head of this committee, the military chose Tariq al-Bishri, a judge who went from Nasserist-inspired nationalism to ideas that underlined Egypt’s Islamic identity and the need to base its laws on sharia. In the sermon he gave in Cairo during the huge rallies on 18 February, the Brotherhood’s spiritual leader, Sheikh Yusuf al-Qaradawi, urged workers on strike to desist and give the army time, while also calling for a change of government.

The “orderly transition” is taking shape, as envisaged by the military with US backing: the course is set for transition to an electoral democracy under the army’s control, as took place in Turkey between 1980 and 1983. Another facet of the “Turkish model” looms on the horizon: the possibility of an Islamic-inspired political party eventually coming to power, running Egypt in cooperation with the military. This could prove easier in Egypt, since its army does not uphold secularism as the Turkish army claims to do. But such an arrangement will remain problematic if the Brothers do not carry out the type of makeover the Turkish AKP undertook, and for as long as they arouse the suspicion of the US and Israel’s hostility for their attitude towards Palestine.

If the revolutionary potential of 25 January lasts and becomes radicalised (a wave of social struggles have followed Mubarak’s resignation; see Egypt: first democracy, then a pay rise), Egypt might well see the growth of a leftwing mass opposition. Then the Muslim Brotherhood would seem the lesser of two evils, for the US as much as its Egyptian military clients.

Gilbert Achcar is a professor at the School of Oriental and African Studies, University of London, and author of The Arabs and the Holocaust: the Arab-Israeli War of Narratives, Metropolitan, New York, and Saqi, London, 2010.

This article was originally published on ZCommunications.org, from Le Monde Diplomatique.