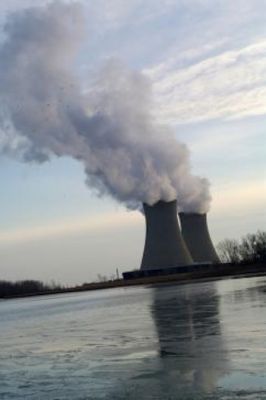 “There’s no reason why technologically we can’t employ nuclear energy in a safe and effective way,” Barack Obama told a group gathered at a town meeting in New Orleans in October 2009. “Japan does it and France does it, and it doesn’t have greenhouse gas emissions, so it would be stupid for us not to do that in a much more effective way.”

As the Japanese government expanded the evacuation area around the Fukushima Daiishi nuclear power plant in response to the leaking of radioactive materials and the threat of three simultaneous meltdowns, you might think Obama would have a reason to back off his support of nuclear energy as a new “clean” energy alternative.

But that wasn’t the case–the Obama administration remains determined to ring in a new “nuclear renaissance.” In fact, just days after the 9.0 magnitude earthquake and tsunami that precipitated the disaster in the Japanese reactors, Obama was signing an agreement with Chilean President Sebastián Piñera, offering U.S. help to start a nuclear power program in his country, where an 8.8 magnitude earthquake struck just last year.

In the wake of the human and ecological tragedy unfolding in Japan, the lesson should be that there is no such thing as “safe” nuclear power. Though the Japan disaster is being portrayed by government officials and most of the media as the result a “perfect storm” of factors, the truth is that it was always a matter of when, not if.

The people who live and work near the Fukushima Daiishi plant were in danger of some kind of disaster befalling them from the day the facility was built–and a similar future could be in the cards for people all over the U.S.

With nearly a quarter of the world’s existing reactors, the U.S. is the largest producer of nuclear power in the world. There are 104 nukes operating in the U.S. According to the Nuclear Regulatory Commission, 23 U.S. plants have the same reactor and containment design as at the Fukushima plant, General Electric’s (GE) Mark 1–including the Oyster Creek plant in central New Jersey, the Dresden plant near Chicago and the Monticello plant near Minneapolis.

Regulators identified problems early on with the Mark 1, which GE began making in the 1960s, marketing them as cheaper and easier to build. In 1972, Stephen Hanauer, an official with the Atomic Energy Commission (the precursor to the NRC), recommended that that the Mark 1 be discontinued, citing among other safety risks its smaller containment design, which made it more likely to explode or rupture from a buildup in hydrogen.

But Hanauer’s warning went unheeded. Joseph Hendrie, who would later become chair of the NRC, reasoned at the time in a memo that the technology had been so widely accepted that “reversal of this hallowed policy, particularly at this time, could well be the end of nuclear power.”

The New York Times also reported, “Several utilities and plant operators also threatened to sue GE in the late 1980s after the disclosure of internal company documents dating back to 1975 that suggested that the containment vessel designs were either insufficiently tested or had flaws that could compromise safety.”

In another parallel to the Fukushima nightmare, nearly half of the nuclear reactors operating in the U.S. are close to major fault lines, including the Diablo Canyon and San Onofre plants located near California’s San Andreas Fault.

Some are also within spitting distance of an ocean–San Onofre in San Diego County sits on the beach, with a breakwater as its only defense against a tidal wave.

Fifty miles, by the way, is the evacuation zone that the NRC advised for Americans near the Fukushima Daiichi plant.

The conclusion to all this is obvious–the U.S. is just as likely to see a devastating “perfect storm” like the one in Japan.

Another claim is that U.S. nuclear regulators are much more stringent than Japan. But that rings hollow in the face of facts.

According to a 2010 study of nuclear plant safety by the Union of Concerned Scientists (UCS), U.S. plants experienced at least 14 “near misses” last year. The report overview explains that “many of these significant events occurred because reactor owners, and often the NRC, tolerated known safety problems.”

One example is the Calvert Cliffs nuclear plant in Maryland, which on February 18 automatically shut down when rainwater leaked in through holes in the roof and dripped onto electrical equipment. Over many months before this, workers said they noticed the leaks, but the plant managers put off repairs–because, as the UCS report summarized, “the roof only leaked when it rained.”

According to the report, operators at the Diablo Canyon nuclear plant near San Luis Obispo, Calif., didn’t realize that a system to pump water into one of its reactors during an emergency wasn’t working–for 18 months. It had been accidentally disabled by the plant’s own engineers.

The UCS report portrayed the NRC’s investigations as “more like a strobe light” than a spotlight, since it audits only about 5 percent of activities at nuclear plants each year.

One built-in danger to nuclear power is the toxic byproducts it produces–such as spent fuel rods, which contain uranium and radioactive material. This spent fuel has to be stored at least five years in water-filled cooling pools, and then sometimes sealed in steel-and-concrete casks for longer-term storage. If it isn’t kept cool, the fuel can overheat, releasing harmful radiation.

According to the Government Accountability Office (GAO), the U.S. has generated about 70,000 metric tons of nuclear waste–enough to fill a football field more than 15 feet deep. The GAO projects that there will be more than twice as much–153,000 metric tons–by 2055.

The U.S. has been unable to find places to “dispose” of this dangerous material, so it’s kept onsite, adding to the dangers of nuclear plants–as the Fukushima disaster has shown.

Thirty-five states have plants that store spent nuclear fuel, including 31 where there are operating reactors, according to he NRC. “Unlike the Japanese reactors, in the U.S., the spent-fuel pools are currently holding, on the average, four times more than their designs intended,” Robert Alvarez of the Institute for Policy Studies said at a recent press conference. “They are densely compacted.”

Existing reactors in the U.S. are decades old, since no new reactors have been built since the late 1970s, and for good reason–Three Mile Island. Following a notorious near-meltdown in 1979, residents near the Pennsylvania plant are still suffering the effects of the radiation poisoning.

A University of North Carolina study showed that in the areas of greatest fallout, lung cancer rates jumped 400 percent, and leukemia rates climbed 700 percent. But despite overwhelming evidence and the stories of hundreds of people who have had to live with the aftermath of Three Mile Island, the industry hasn’t been held accountable.

In June 1996, a 2,000-person class-action lawsuit was dismissed on the grounds that the plaintiffs failed to prove that the Three Mile Island accident had caused their health problems.

The same lack of concern or accountability for residents and workers at the plant was the hallmark of the 1986 Chernobyl nuclear meltdown in northern Ukraine. In the aftermath, children were allowed to drink milk that was poisoned by radiation after it was produced by cows that ate grass in the vicinity of the disaster.

Natalia Manzurova, a Russian engineer who is one of the few survivors out of 800,000 “cleaners” or “liquidators” at Chernobyl, said in an interview after Japan’s accident:

Every nuclear accident is different, and the impact cannot be truly measured for years. The government does not always tell the truth. Many will never return to their homes.

At the time of the Chernobyl disaster, the U.S. chastised Russia for its lack of preparedness–but few plans are in place if a disaster happens here. As longtime environmental activist and journalist Jeffrey St. Clair chronicles in a recent article about New York’s Indian Point, emergency response drill tests at the plant were rigged so that the facility would be sure to pass.

Despite all this, the Obama administration wants to build more nuclear reactors, as part of the three-fold energy plan–offshore drilling, “clean” coal and nuclear energy. After more than 30 years of no new reactors being built in the U.S., four new reactors–in Georgia, Tennessee and South Carolina–are slated to be up and running by 2020. The Department of Energy has set aside $36 billion in loans for the construction of 20 new nuclear power plants.

After Fukushima, the Obama administration is still standing behind nuclear energy and expects U.S. workers to pay for it. Nuclear power is a risky investment that Wall Street won’t make, unless taxpayer money subsidizes it. So Obama’s 2011 budget proposes tripling the loan guarantee program for nuclear energy–from the $18.5 billion that Congress has already approved to $54.5 billion.

But it’s not just the administration’s long ties to the energy and nuclear industry–Exelon, the Illinois-based utility that produces approximately 20 percent of the country’s nuclear power, donated nearly $210,000 to Obama’s presidential campaign–that explains Obama’s position, but a deeper commitment to keeping industry profitable.

Nuclear power is neither a safe nor inexpensive alternative to fossil fuel, but for a few CEOs at the top and their partners in Washington, it’s extremely profitable and worth the risk to human life and the environment.

There are safe and less expensive solutions, including solar and wind power. And we should join people around the world who are protesting against nuclear and for these alternatives.

In Germany, where the government extended the operations of seven ageing reactors by eight years, activists organized protests in response to Fukushima. Some 50,000 people formed a human chain from a nuclear reactor to Stuttgart, demanding an end to nuclear power.

The potential exists to build a new vibrant anti-nuclear movement here in the U.S. In the wake of Japan’s disaster, support for building nuclear power plants dropped slightly lower than it was immediately after the accident at Three Mile Island.

According to a CBS News poll released on March 22, only 43 percent of those polled after the failure of the Fukushima Daiichi plant in Japan said they would approve building new facilities in the U.S. That’s a steep decline from the 57 percent who said they approved of new plants in 2008.

The risk may be worth it for those who profit from nuclear, but it’s too great for the rest of us.

Joyce Corradi escaped her home near Three Mile Island with her son after the accident. Her son showed signs of radiation poisoning almost immediately, but doctors told her at the time it was nothing. She became an activist against the plant.

“There has been a great loss of innocence in this community as far as people in authority having the answers,” she told the Washington Post in 1989. “I’m not sure people know what to believe. I hold my breath every time my son goes for a physical. I hold my breath when I think of him having children.”