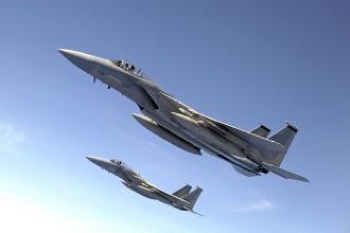 With NATO aircraft circling the Mediterranean Sea, the threat of Western intervention in Libya, led by the U.S. government, literally hangs in the air.

Meanwhile, Muammar el-Qaddafi continues to use his still-substantial military force to carry out a savage assault on those rising up against his regime–most recently in the town of Zawiyah, where witnesses say that tanks and troops unleashed indiscriminate force against men, women and children.

But if anything is certain as the civil war in Libya continues, it is that the actions of NATO and the U.S. will make matters worse. Whether they come from Washington’s neoconservatives or from liberal advocates of “humanitarian intervention,” calls for Western intervention should be opposed in all their forms, from no-fly zones to covert operations to the use of ground troops.

While the U.S. and other Western powers debate how to proceed, they are united politically, turning against the Libyan leader who was demonized 30 years ago, but rehabilitated as an ally during the 1990s and 2000s. Western leaders are pushing another new line about Qaddafi–instead of the man “who saw the error of his ways” when he supported George W. Bush’s “war on terror,” he’s now the target of new threats.

Qaddafi should be despised by anyone who cares about justice for the monster he is. But the U.S. government and its allies in Europe shouldn’t be trusted for a moment to be acting in the interests of the people of Libya fighting for democracy. Western powers will only act in a way that serves their imperialist interests. That’s why we stand with those in the Libyan rebellion who call for the U.S. and other Western powers to keep out.

Libya is one link in a chain of popular uprisings sweeping the Arab world. The region-wide rebellion has left the U.S. scrambling to respond to the toppling of its longtime allies in Egypt and Tunisia–and the possibility that other U.S.-backed dictatorships, like Bahrain and Saudi Arabia, could also succumb to revolt. Intervention in Libya would provide the U.S. government with a golden opportunity after the setbacks it has suffered.

By contrast, for the masses of people in the region, the upsurge sweeping the Arab world offers the best opportunity to reverse decades of Western meddling–and a genuine opportunity for self-determination.

Qaddafi hopes that the massacre underway in Zawiyah–the city closest to Tripoli that is under the control of the opposition–will mark a turning point in his bid to crush the revolt spreading across Libya.But whatever the outcome there, the clash between rebels fighting for an end to Qaddafi’s police state and the regime seems likely to grind on–and the human toll could climb significantly.

This situation has opened up a debate within the U.S. political establishment. Sens. John McCain and Joe Lieberman are pressing the Obama administration to impose a no-fly zone–similar to the one over southern and northern Iraq for 12 years before the 2003 invasion–supposedly to stop Qaddafi from using his jet fighters against poorly equipped rebel forces. Lieberman is also calling on Obama to send arms to the rebels. Sen. John Kerry has called for the U.S. to bomb Libyan airfields so the regime’s jets can’t take off and land.

Newt Gingrich, who is eyeing a 2012 presidential run, says the U.S. should act immediately against Qaddafi without worrying about the approval of NATO or any other international body. “The idea that we’re confused about a man who has been an anti-American dictator since 1969 just tells you how inept this administration is,” said Gingrich.

Gingrich should brush up on his history. It was the Bush administration that turned Qaddafi into an ally in the U.S. “war on terror.” And it’s Defense Secretary Robert Gates, a Republican, who has cautioned that imposing a no-fly zone is no simple matter.

“A no-fly zone begins with an attack on Libya to destroy the air defenses,” Gates told the New York Times. “That’s the way you do a no-fly zone. And then you can fly planes around the country and not worry about our guys being shot down. But that’s the way it starts.”

The no-fly zone could prevail as the least-bad option for U.S. military planners, as the intelligence consulting firm Stratfor spells out:

The no-fly zone is a low-risk action with little ability to change the military reality that creates an impression of decisive action. It does, as we argue, have a substantial downside, in that it entails costs and risks–including a high likelihood of at least some civilian casualties–without clear benefit or meaningful impact.

The Obama administration is also struggling to balance calls for intervention in yet another Muslim country with managing its existing occupations of Afghanistan and Iraq–all while demanding budget cuts at home. There is substantial opposition to Western action from key powers like Russia and Turkey–and even those governments inclined to act, such as the U.S., Italy, France and Britain, differ about the scope, timing and goals of intervention.

Yet the importance of Libya’s oil resources could tip the balance. U.S. oil companies have spent recent years setting up significant operations in Libya–at the invitation of the Qaddafi regime–that they would not quickly abandon.

For Western business, more than oil is at stake. Since it entered the pro-U.S. fold, Libya has become a kind of model of pro-corporate “neoliberal” policies, with rapid privatization of formerly state-run industries and various trade liberalization measures. In Washington, a wide range of conservative figures–including those now calling for war–went to bat for the regime as lobbyists.

All this explains why the U.S. was perfectly happy to do business with Qaddafi, despite the embarrassment of its ties to a government it once denounced–and in spite of the Qaddafi regime’s record of violent repression and human rights abuses.

And it also explains why Washington is searching for some section of the anti-Qaddafi opposition to back now–in the hopes of preserving the Qaddafi regime without Qaddafi. According to the Washington Post:

U.S. officials have queried those with business and other non-governmental ties for names, phone numbers and assessments of those who appear to be in charge. “It’s a very fluid situation, but we are reaching out through these different channels to a variety of people who are in the opposition,” White House spokesman Jay Carney said.

The U.S. will certainly find some Libyans who want to cut such a deal. Members of Qaddafi’s cabinet and military officers have defected to the opposition to try to save their necks. The CIA-backed National Front for the Salvation of Libya is an unsurprising advocate of U.S. action. Other forces may be tempted to accept Western support out of desperation in finding some leverage against the regime’s savage violence, in spite of the horrific record of U.S. “humanitarian intervention” from Somalia to Serbia and beyond.

But other sections of the rebellion have maintained consistent opposition to U.S. involvement on the grounds that this would taint their independence and cast doubt on the legitimacy of their struggle.

“We are against any foreign intervention or military intervention in our internal affairs,” said Abdel-Hafidh Ghoga, a human rights lawyer and former government minister who joined the opposition. “This revolution will be completed by our people with the liberation of the rest of Libyan territory controlled by Qaddafi’s forces.”

The uprising against the Qaddafi regime shouldn’t be judged by anyone who claims to lead it. This much at least should be clear–the rebellion that is shaking the Libyan regime is a furious and determined upsurge against police-state repression and an economic system where a tiny elite has become rich at everyone else’s expense.

In this regard, Libya’s uprising can’t be distinguished from the uprisings that toppled dictators in neighboring Tunisia and Egypt–and the ones shaking undemocratic and repressive regimes in Algeria to the west, and Yemen, Bahrain, Jordan and more to the east.

Unfortunately, some voices in the U.S. antiwar movement, such as the Party for Socialism and Liberation (PSL) and the Workers World Party (WWP), are wrong on just this question. They have characterized the revolt against Qaddafi as different from the revolutions in Egypt and Tunisia–in fact, as a movement allied with U.S. imperialism.

This slander flows from the little-discussed record of these organizations’ support for the Qaddafi regime as “progressive” and “anti-imperialist”–in spite of Qaddafi’s increasingly close relationship with the U.S. and other Western governments.

At best, PSL and WWP are guilty of accepting the false proposition that “the enemy of my enemy is my friend”–in other words, because the U.S. denounces Qaddafi, he must be an anti-imperialist. But the cause of opposing imperialism is set back by associating it with a dictator who has unleashed savage violence against the people of Libya–not to mention made deals with “the enemy” when it suits him.

Another line of argument seizes on reports of large numbers of refugees fleeing Libya and of violence against Libya’s Black African immigrant population to claim that the opposition to Qaddafi’s rule is “racist.”

This lays the racism of the Qaddafi regime itself at the feet of those who are trying to resist it. Clearly, racism in Libyan society predates an uprising that began less than a month ago–in fact, Qaddafi’s regime has long stoked racism in Libya as a means to deflect anger and maintain his grip on power.

Any instances of violence against Black Africans by Libya’s rebel forces are antithetical to the spirit of solidarity that has characterized all the uprisings in North Africa and the Middle East. But it must be pointed out that the Qaddafi regime helped create the conflict by consciously drawing on Black Africans to serve as a mercenary force against the resistance.

For those committed to opposing any and all attempts by U.S. imperialism to regain the ground it has lost, there is no middle ground–the U.S. will not be a force for good in the Middle East, and the best prospects for liberation from U.S. domination lie with the revolution spreading from Tunisia and Egypt to other countries.

Libya is one link in a chain of revolt–something Qaddafi himself understood when, in stark contrast to the people of the Arab world and anti-imperialists everywhere, he expressed remorse that Tunisia’s Zine El Abidine Ben Ali had been ousted by the Tunisian uprising.

The U.S. government is coming to the conclusion that a Western military presence in or around Libya will help to dampen the revolutionary tide in North Africa and the Middle East. They must be opposed in every way.