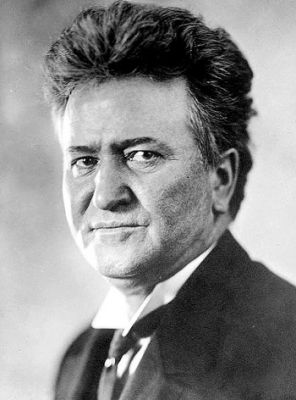 If there is one single reason why Wisconsin has become a national battleground in the war to roll back labor rights, it is history. Starting with Germans who immigrated to the Badger State after fleeing the crushed revolution of 1848 in Germany, Wisconsin is steeped in more than a century of popular movements that fought for women’s equality, freedom of the press, grassroots democracy and socialism.

This history includes “Fightin’ Bob” La Follette who was governor of the state from 1901 to 1906 and the founding of the nation’s first public employees union in 1932. Robert Marion La Follette was a radical, anti-slavery Republican who championed the first system of worker’s compensation, progressive taxation, the open primary, women’s suffrage and the direct election of U.S. Senators. All this came to be known as “the Wisconsin Idea.”

Less well known is that the city of Milwaukee had Socialist Party mayors and city councils from 1910 to 1960. European immigrants poured into Wisconsin in the late 19th century as Milwaukee was industrializing. The resulting concentration of wealth and monopolies in railroad rates, grain elevators and utilities spurred labor organizing.

Deaths from industrial accidents and an 1896 boycott of a streetcar monopoly in Milwaukee awakened thousands to the value of organized resistance. Socialists ran explicitly against municipal corruption and bribery (“boodling”).
Socialist policies helped reduce crime and disease and completely eliminated municipal debt by 1932. Because these elected officials fought against privatization of public utilities, they were often derided as “sewer socialists.”
The party owed much of its effectiveness to the “Bundle Brigades,” dedicated volunteers who engaged in public education house to house, outside factory gates and on street corners. On any chosen issue, they could distribute 750,000 leaflets in no less than 12 languages within 48 hours.

The first elected socialist mayor was a patternmaker by trade. Emil Seidel served from 1910 to 1912 and hired the future poet and Lincoln biographer, Carl Sandburg, to serve as his personal secretary.

Dan Hoan, voted in as Seidel’s city attorney, took on the railroad monopoly and enforced contracts that required them to elevate or lower tracks for public safety. Hoan also persuaded the city to reject a 10-year contract with the electric company to furnish street lights, maintaining public ownership instead.

In 1916, the 35-year-old Hoan was elected mayor. In his inaugural address he said, “The workers of our city are its most valuable asset. It is necessary and desirable to apply our attention to such measures as will promote their well-being, safeguard their health and protect their rights.” One of his first acts was to enact a municipal tax to cover a $2 million shortfall in funding the fire and police pensions.

Serving as mayor until 1940, Hoan helped create Milwaukee’s fine network of parks and protected shoreline with a “make work” system that employed 2,000 men during the Great Depression. Also in the 1930s, Milwaukee issued $12 million in scrip, called baby bonds, to pay city workers and which were accepted by grocers and valid for municipal taxes.
One lasting investment was Milwaukee’s public housing, another first in the nation. Begun in 1919, the program sought to eliminate “speculation in land values and of waste and private profit in home construction,” and foster “the planning of streets, water, lighting and recreation spaces; and the collective ownership of homes by the workers.”

Scott Walker should listen to what Dan Hoan said in 1932: “Universal cutting of wages is frequently advocated and resorted to as a remedy for depression, which leads to a reduction of consuming power and results in the decline of industry and the closing of factories. Then follows the demand for further cuts in wages. To follow this path is to dig our own grave. For example, thousands of small shopkeepers are hanging on by a mere thread; to cut their trade means to close them up and drive them to poor relief, which again raises taxes.”

Under a banner of “Starve the War and Feed America,” Victor Berger was elected to multiple terms as a U.S. congressman. But Berger paid a price for his antiwar views. He was indicted and convicted of violating the Espionage Act because of his editorials. Even while staring at 20 years at Leavenworth, Berger was reelected in 1918.

Milwaukee’s third Socialist Mayor, Frank Zeidler, served from 1948 to 1960. He presided over a period of rapid population growth and is remembered for his constructive relations with Milwaukee’s Black community at a time when his adversary, police commissioner Harold Breier, brutalized civil rights demonstrators.

What changed? While Madison is a liberal island, Wisconsin is overwhelmingly white, so perhaps it was easier for the Tea Party to make inroads with its veiled racial appeals and scapegoating. Unemployment in Wisconsin is 9.6 percent, and the state lost 3,600 public service jobs in January before Walker’s threatened layoffs. Local labor educator Frank Emspak points out that as wages have stagnated or even declined for many in Wisconsin, the promise of lower taxes were tempting.

But given the mass outpouring of dissent in Madison to the right-wing assault, Wisconsin is showing that its legacy of radical left politics has relevance far beyond the history books.