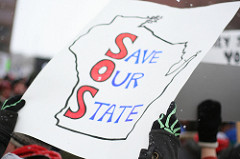 This article was published on CommonDreams.org, from The Nation.

First Governor Scott Walker announced that he was attaching to a budget-repair bill a scheme to eliminate most collective bargaining rights for state, county and municipal employees in Wisconsin. In the same measure, he proposed to restructure state government so that he would be able to consolidate decision-making authority over cuts in health programs and selling off public assets in his office.

The people objected, big-time, generating the largest protests in the state’s history. They even filled the Capitol with thousands of police officers, firefighters, state employees, teachers, students and their allies.

Then Governor Walker’s allies forced the bill through the state Assembly, holding an early morning vote open for so short a time – 17 seconds – that the majority of Democrats were unable to participate.

“With having just a 17-second roll call, they silenced their legislators, but far more important the people we represent,” said Assembly Minority Leader Peter Barca, D-Kenosha.

Barca now says that he is reviewing recordings of the vote, as well as three Assembly rules which address voting.

“The final vote was 51 to 17, with 28 people not voting, including four Republicans, an Independent, and a score of Democrats,” the minority leader explained. “Even their own members didn’t get to vote. It’s almost as if once they reached the magic 50, they quick turned it off. But the part that I guess is so troubling is that we believe it was an improper vote. We’re looking at tapes now. We’re looking at whether or not anything is legally or constitutionally problematic. But we’re in uncharted waters. This has never happened before.”

Then the Republican leadership of the state Senate announced that, if and when a vote is scheduled in that chamber, debate will be severely limited. That has strengthened the resolve of Democratic senators who left the state in order to prevent a quorum for voting on the bill to stay away.

Then, Governor Walker and his legislative allies engineered a scheme to close the Capitol, which has traditionally been one of the most open and accessible in the nation, to citizens who want to protest against the bill. While a handful of protesters remained inside the building, hundreds of union members, including police and firefighters, and their allies, sought access to the Capitol but were denied.

“I am disappointed in Governor Walker’s decision to block the public’s access to their State Capitol,” said state Rep. Mark Pocan, a Madison Democrat who is the former co-chair of the powerful legislative Joint Finance Committee. “I want to assure my constituents that I will not allow Governor Walker to limit your access to my office. If any constituents have legitimate business with my office and are being locked out of the Capitol, a representative from my office will be available at the Martin Luther King, Jr. Blvd entrance to the Capitol at the top of every half hour to escort constituents into the building.”

At mid-day, Pocan attempted to escort a group of firefighters union members into the Capitol, but was blocked at the door. “You can’t stop the function of state government, just because Gov. Scott Walker says so,” Pocan yelled through a half-open door.

Capitol Police eventually allowed the representative and eight firefighters to enter the building but denied access to others.

Pocan announced that he and other Democrats would attempt to convene a hearing and promised to find a way to let the rest enter the building in time for a hearing that Pocan was attempting to convene.

At the same time, unions announced that they would take legal action to have a judge order the Capitol reopened.

Walker’s attempts to silence dissent comes at a point when he is preparing to deliver a Tuesday budget address that is expected to stir even more opposition – as it is expected to include proposals for dramatic cuts in state support for public education and local services.

On Saturday, more than 100,000 Wisconsinites protested Walker’s attacks on unions and his proposed power grab.

So how’s this all playing?

A new poll by a polling firm that works with Democrats, which will be released Tuesday morning, showed that Walker would lose if an election was held now.

Now, according to the Public Policy Polling survey  of likely Wisconsin voters, Barrett would win by a 52-45 margin.

“The difference between how folks would vote now and how they voted in November can almost all be attributed to shifts within union households. Voters who are not part of union households have barely shifted at all- they report having voted for Walker by 7 points last fall and they still say they would vote for Walker by a 4 point margin. But in households where there is a union member voters now say they’d go for Barrett by a 31 point margin, up quite a bit from the 14 point advantage they report having given him in November,” explained the polling firm’s analysis.

“It’s actually Republicans, more so than Democrats or independents, whose shifting away from Walker would allow Barrett to win a rematch if there was one today. Only 3% of the Republicans we surveyed said they voted for Barrett last fall but now 10% say they would if they could do it over again. That’s an instance of Republican union voters who might have voted for the GOP based on social issues or something else last fall trending back toward Democrats because they’re putting pocketbook concerns back at the forefront and see their party as at odds with them on those because of what’s happened in the last month.”