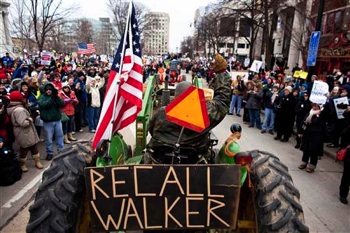 Led by Wisconsin’s Scott Walker, Republican governors in a dozen states are  painfully teaching the public that a “budget crisis” is not the same kind of thing that working families go through.

Contrary to the false equivalency that politicians (including, unfortunately, Barack Obama) use to blur the difference between family and government budgeting, state governments and families have very different options when a budget crunch arrives. A family’s budget pinch means that their rent and utility checks are bouncing, there’s only cereal and Ramen noodles left to eat, and payday is still a couple days off. When this sort of emergency arises, every member of the family has to sacrifice.

In contrast, state governments have a range of choices and resources far beyond those of a family: the ability to raise revenue via targeted tax increases on those who can easily afford it (e.g., the richest 1% who consume 24% of all income) and the sale of bonds to cover long-term investments, to cite just two examples.

So when a governor declares a “budget crisis,” he or she is almost invariably about to utilize a razor-sharp political weapon designed to accomplish specific, pre-arranged policy goals transferring resources and power to elites in the name of “balancing the budget.”

There are great clouds of rhetoric about “everyone sacrificing” and the absolute importance of “no new taxes” that would add to the suffering that supposedly all are enduring equally, whether CEO, state employees or those on public assistance.

But behind that camouflage, choices are being made about whether union rights will be maintainted, whose taxes will be cut and whose paychecks will be reduced, whose services will be eliminated or made most costly, and whose children will be availabe to attend a state unversity, and whose will not.

Paul Breer and Kevin Donohoe of Think Progress’ Wonk Room have very usefully compiled a dozen examples of states in “budget crisis” where the Republican governor is chain-sawing away at education, health and infrastructure while reserving more delicate treatment—in the form of tax breaks—for corporations and the investor class. Here’s my summary:

ARIZONA: Budget cuts are a life-and-death matter in Arizona, as last October, Gov. Jan Brewer enacted drastic cuts to the state’s Medicaid program, which resulted in 2 deaths and left 98 Arizonians waiting for transplant funding.  Brewer was willing to yield a bit after frantic protests from families facing the unnecessary deaths of their loved ones, but House Appropriations Committee chair Jon Kavanagh (R) said, “not enough lives would be saved to warrant restoring millions in budget cuts.”

GEORGIA: Things will be just peachy for the super-rich under the budget emerging here. Public employees and retirees will be hammered with a 20% health insurance, funding for state universities will be downsized by $75 million. Meanwhile, showing their priorities, Republicans in the House are considering a plan to impose an ultra-regressive flat income tax rate and cut corporate taxes by 33 percent.

FLORIDA: Gov. Rick Scott proposes making his state the most “fiscally conservative” in the U.S., laying off 6,700 state employees, slashing education  by $4.8 billion and Medicaid by almost $4 billion. These cuts will enable Scott to reduce corporate taxes by about $1.5 to $1.8 million.

IOWA: Gov. Tom Brandstad is promoting a $200 million tax cut on
commercial property taxes and corporate income. However, he would freeze spending on schools, wipe out $42 million to state universities and has begun laying off state nurisng-home workers.

But it gets worse: Republican-controlled House committees have gone even further, approving tax refunds for upper-income Iowans while cancelling infrastructure investments, eliminating preschool for 4-year-olds, closing Iowa workforce development (retraining of displaced workers) offices, and carving out even larger cuts to public universities.

MAINE: Tea Party Gov. Paul LePage is a big believer in “shared sacrifice.” In practice, that apparently means $200 million in tax cuts for large estates, business and the rich, while raising property taxes for the middle class. LePage also plans on freezing healthcare for working parents, and slashing funds for schools and infrastructure

Moreover, last week Snyder signed the outrageous “hostile takeover” bill outlined by Lindsay Beyerstein on this site, which would allow the state to step into fiscally-troubled cities and seize control over their budgets, and negate union contracts.

NEW JERSEY: Gov. Chris “Christie’s budget calls for handing out $200 million in business tax cuts, while reducing mental health services, taking $540 million from Medicaid, and holding property tax rebates for seniors hostage until public workers give up many of their health and pension benefits.

OHIO: Gov. John Kasich (R) wants to eliminate 25% of schools’ budgets, $1 million from food banks, $12 million from children’s hospitals, and $15.9 million from an adoption program for children with special needs. A Kasich staffer bluntly admitted, “even if there weren’t an $8 billion deficit, we’d probably be proposing many of the same things.”

While funding for food banks and special-needs children is expendable, Kasich has opened up his heart to the cries of long-suffering oil companies by providing new tax breaks, along with a repeal of the estate tax and an income tax cut for the rich. For public employees, Kasich envisions a Wisconsin-style demolition of their union rights.

PENNSYLVANIA: Who gives a “frack” about anyone but the energy companies? Gov. Tom Corbett intends to cut taxes for corporations, while freezing teacher salaries, reducing dental care for Medicaid recipients, and eliminating more than half of the state’s universities. But left untouched and untaxed are out-of-state energy companies engaged in the environmentally
disastrous practicie of “fracking” to loosen up natural gas, earning them hundreds of millions while leaving the state huge potential liabilities.

WISCONSIN: Endlessly declaring that “we are broke,” Gov. Scott Walker has used used the pretext of a fairly routine budget shortfall to justify seeking the termination of public-union rights, $900 million in cuts to K-12 education, reductions in Medicaid, cuts in tax credits for low-income workers, and other assaults on the vulnerable.

However, this would-be budget-balancer is proposing a total of $115 million in new tax breaks to corporations, $36 million to investors, and $49 million in tax cuts for those wealthy enough to afford “Health Savings Accounts (virtually useless as insurance, but a great way for the healthy and wealthy to shelter income from taxes), according to the Institute for Wisconsin’s Future (IWF).

The net outcome of Walker’s new budget: the state still winds up with deficit of $58.7 million, notes IWF.

But as suggested by Kasich’s spokeman cited above, the budget manuevers in these dozen states “in crisis” were aimed at achieving policy goals that have longstanding conservative objectives: restrcuture government to reward the rich.

The “crisis” afflicting the states has merely been a political instrument to hammer working people, the poor, the elderly and the sick, while conferring new tax cuts to the people who truly matter: the richest 1 percent.