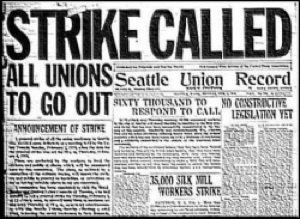 Now, relying on a legally questionable maneuver, the overwhelming majority of Republican legislators have passed the anti-union part of Walker’s putative “budget repair” bill proposal, sending it to Walker for certain signing. In the hallways outside the legislators’ chambers Capitol, protestors were shouting “shame” and “you’re disgraceful,” but also calling out, “general strike.”

Could Madison—or Wisconsin—workers turn to a general strike, shutting down public and private enterprise?

“I don’t know if there’s any serious thinking about it,” says SCFL president Jim Cavanaugh, a member of a state employee union, who worked on labor history projects for the famous Wisconsin State Historical Society. “Many people are seriously talking about the possibility, what it means, and what critical mass it would take. But we’re several steps away from a planning stage.”

An ad hoc committee of the SCFL—the central labor council, or local counterpart to the national AFL-CIO, covering Madison and surrounding counties—has pulled together on the SCFL website information about the history of general strikes and what organizational work went into successful general strikes in Ontario, Canada, from 1996-1998.

During general strikes most unions in some geographical region, typically joined by nonunion workers and other groups, shut down all private and public goods and service production for a period of time, usually keeping open and running essential services.

Historian Peter Rachleff notes that general strikes—some spanning many states, others limited to a city—have played an important role in U.S. history. In the late nineteenth century, for example, there were three especially wide-ranging strike waves—the 1877 railroad strike, the 1886 Haymarket/8-hour day strikes, and the Pullman strike and boycott of 1894. In the twentieth century, workers conducted general strikes in Seattle (1919); in Minneapolis, Toledo and San Francisco (1934); and in a half-dozen cities—along with industry-wide strikes immediately after World War II.

“One of the most interesting features of general strikes,” Rachleff writes, “has been the extent to which, although they usually start out as ‘defensive,’ as resistance to employer/government pressure on workers, they turn ‘offensive,’ with workers seeking to improve their work and living situations, to expand their power, and to imagine a better world.”

In Wisconsin, local unions would have to call strikes. But almost all public employee unions are barred by law or contractual arrangements from striking, and most private sector unions also face contractual and legal obstacles. They could strike, nonetheless, without legal protection and with higher risk of retribution, raising the stakes in the conflict. The central labor council could play a major coordinating role if the battle reaches that stage, but a general strike is not simply “called,” Cavanaugh says. “You build for things like that.”

Much of the building now is for demonstrations that took place Thursday when the bill passed, leading up to a mass rally on Saturday at the Capitol (preceded by a “tractorcade” by sympathetic family farmers).

Union members and supporters are so enthusiastically throwing themselves into the task of getting signatures on petitions to hold recall elections for eight Republican state senators that a key server was overloaded Wednesday. (Cavanaugh says “We Are Wisconsin,” a broad coalition, will coordinate the recall efforts.) At least a few are quite vulnerable, given their margin of victory and the shift in political sentiment in the state against Walker and his plan and for workers’ rights.

Even before then, on April 5, voters will choose between incumbent state Supreme Court justice David Prosser—a self-identified political and judicial conservative who says he complements Gov. Walker’s program and is part of a four to three Republican majority on the court—and moderate Democrat JoAnne Kloppenburg, a veteran of the attorney general’s office.

Cavanaugh worries that important as that vote could be for rulings on Walker’s legislation or future action, unions and progressives have been preoccupied with immediate battles. “I don’t know if the good guys can launch a big enough effort” for an election that’s coming soon and likely to draw lots of outside corporate and conservative money on behalf of Prosser,” he said.

Although labor strategists are focusing much of their attention on politics, they are not neglecting the workplace, the streets, and other arenas.

Union members are planning to wear symbols of solidarity at work on specific days—green for AFSCME (state, county and municipal union) state workers one day, red for all Milwaukee public employees another.

On their own, workers could organize more sick-outs, following the lead of many Madison teachers last month. But the new legislation gives Walker the power to fire any state employee who misses three days of work. And public employees could work to rule. As Madison labor attorney Aaron Halstead explains, “Hypothetically, when workers are conducting safety checks on vehicles, there are checks that are really, really thorough, and checks that are cursory. Individuals could decide to be very thorough.”

General strike or no, there is already a general labor, political and social movement building in Wisconsin that has potential to grow, spread and gain power—despite momentary defeats.