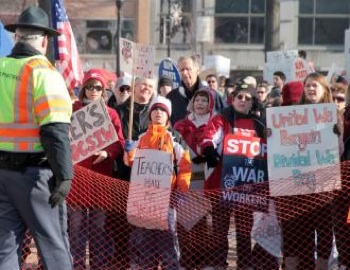 As labor leaders push an electoral strategy in their clash with Republican Wisconsin Gov. Scott Walker, the state Capitol was once again the site of a massive pro-union rally March 5, with an estimated 30,000 to 40,000 people in attendance.

The rally in Madison was small only in comparison with the previous week’s turnout of over 100,000. But although it was organized in less than three days, it still drew a huge and spirited crowd opposed to Walker’s union-busting agenda.

“It’s amazing that three weeks into this thing, tens of thousands of union members are still showing up at the Capitol,” said Mike Imbrogno, a member of the executive board of the American Federation of State, County and Municipal Employees (AFSCME) Local 171 in Madison. “The optimism and union spirit is inspiring. People are definitely ready to keep up the struggle.”

A convoy of yellow Union Cabs, Madison’s only worker-owned taxi company, circled Capitol square honking “This is what democracy looks like!” The rally included performances by musicians Michelle Shocked and Ryan Bingham, and a fiery speech from documentary filmmaker Michael Moore.

“Wisconsin is not broke,” Moore told the crowd in response to Walker’s frequent claim that the state has run out of money. “The only thing’s that’s broke is the moral compass of the rulers.” He added: “You have awakened a sleeping giant known as the working people of the United States of America! Your message has inspired people in all 50 states, and that message is: ‘We have had it!'”

Protests in Wisconsin began in the middle of February after Walker unveiled a bill to close a $137 million shortfall in the current budget. The bill would not only impose massive health-care and pension cuts on public-sector workers, but would also strip them of most of their collective bargaining rights, eliminate automatic deduction of union dues from workers’ paychecks, and force public sector unions to hold recertification votes every year.

The initial demonstrations and the occupation of the state Capitol building by union members, students and other supporters of labor rights, led all 14 Democrats in the Wisconsin Senate to leave the state, depriving Republicans of a quorum necessary to pass Walker’s bill.

State government remains gridlocked until the Democrats return, but up until now, Walker has been unwilling to budge. He presented a budget March 1 for the next two years that would include massive cuts to education and Medicaid spending. A few days later, Walker announced that he would lay off more than 1,500 state workers if the Democrats refuse to come back and vote on his budget proposals. And he earlier set a March 13 deadline for the cancellation of the extension of a contract covering state workers.

But Walker is also facing pressure. His union-bashing and budget proposals are highly unpopular in Wisconsin. A survey by the conservative Rasmussen group found that six out of 10 Wisconsin voters disapprove of Walker’s performance, with nearly five out of 10 disapproving strongly. Other polls have shown clear majorities support collective bargaining rights for public workers and oppose cutbacks in their benefits.

Attempts by Walker and his wealthy backers to shore up his support have fallen flat. On Sunday, March 6, a pro-Walker rally at Madison’s Alliant Center sponsored by Americans for Prosperity, a group funded by the billionaire Koch brothers, drew only about 100 people, while close to a thousand union supporters held a counter-protest outside.

No doubt in response to his falling poll numbers, Walker has opened back-door negotiations with the Senate Democrats, who have been in Illinois since February 17. So far the talks have gone nowhere, but by their own admission, the Democrats are open to a compromise with the governor and won’t hold out to see his budget repair bill derailed completely if they can reach a deal.

But what happens next depends at least as much on what the labor movement does, as on the maneuvering by Wisconsin’s politicians.

It was the initial huge response by labor, including three and four days of sickouts by teachers across the state that created the climate for the Democratic state senators to leave Wisconsin. But with the teachers back at work and Walker refusing to back down, the unions need to figure out what to do next–and just what exactly they’re fighting for.

At the outset of the struggle, many longstanding union activists were angry over union leaders’ declaration that they would except the economic concessions contained in Walker’s bill in exchange for the preservation of collective bargaining in some form. This is reflected in the official AFSCME slogans for the protests: “It’s not about the money!”

In response, union members and supporters have initiated the Kill the Whole Bill coalition, a group that’s dedicated to opposing not just the anti-labor provisions in Walker’s bill, but also the cuts in health care and the privatization of the University of Wisconsin. The coalition argues that because a broad range nonunion working people have rallied to support labor, the unions must stand with them against budget cuts, too.

In addition, National Nurses United organized a meeting of activists February 27 on the theme of no more concessions–and initiated a lively March 3 march and protest around the same call that attracted some 7,000 people.

Many of the activists involved in the anti-concessions organizing argue that union leaders’ turn towards a multiple drawn-out recall elections will inevitably undercut the mobilization that have been the driving force of the movement.

David Poklinkoski, president and business manager of International Brotherhood of Electrical Workers (IBEW) Local 2304 in Madison, said that the labor movement is in uncharted territory–and is in the midst of a debate about how to proceed.

That debate was played out in the run-up to the rally on Saturday, March 5. The Wisconsin AFL-CIO, which had organized the previous two rallies, decided to focus on protests outside Madison and called nothing at the Capitol. Instead, the state labor federation is putting its energies into mobilizing people for recall campaigns against eight Republican state senators and–once it is legally possible to do so next year–against the governor himself.

It was only Wednesday, March 2, that the IBEW and the Building and Construction Trades Council of South Central Wisconsin took the initiative to call another big demonstration in Madison three days later.

Before word of this labor protest had gotten out, the Wisconsin Wave, a recently formed campaign that opposes the budget cuts and Walker’s entire pro-corporate agenda, called its own last-minute protest.

According to Wisconsin Wave organizer and local Green Party activist Ben Manski, an effort was made to merge the two rallies, but the national AFL-CIO would only permit this if the speakers stuck to labor leaders’ talking points. Manski said that AFL-CIO leaders were concerned that speakers at the rally would make calls for a general strike.

On Saturday morning, when Michael Moore offered to speak, organizers of the labor rally turned him down, apparently worried that his speech might be “off message.” So Moore spoke at the Wisconsin Wave’s “We Are Wisconsin” rally instead.

Most of the people who attended the protest were unaware that there were actually two rallies, since they merged relatively seamlessly into one another. But the difficulties of organizing a unified protest highlighted the sharply different strategies that are currently being fought over.

Top union leaders would like to channel the movement into gathering signatures for recall campaigns around the state. The trouble with that approach, says Mike Imbrogno, is that “it will take months, and may fall flat anyway if the Democrats agree to a lousy compromise deal.”

Instead, local unions should be preparing their members for job actions and a broader fight around threatened budget cuts. Certainly, the mood exists for a more militant approach.

“This is all about class warfare and the potential demise of the middle class,” says Madison librarian Pamela Bosben. Robert, a Madison teacher who didn’t want his last name used, said that many of his coworkers were willing to walk of the job again to stop Walker’s agenda.

Despite the fact that the leadership of the AFL-CIO doesn’t want to talk about a general strike, its local affiliate, the South Central Federation of Labor (SCFL), passed a resolution last month saying it would endorse a general strike if it were called.

And a SCFL committee spent March 6 putting together a general strike educational packet, with information about how such a strike could work.

While that possibility may still be a ways off, unions can and should be building on the mood of the protests of the last few weeks to prepare their members for strike action. The next big labor mobilization, set for March 12, will provide an opportunity for further debate and organization.

“The corporate right underestimated the reaction of Wisconsin’s workers,” says David Poklinkoski. “Now we need to broaden the struggle to respond to their attacks.”

Sarah Blaskey contributed to this report.