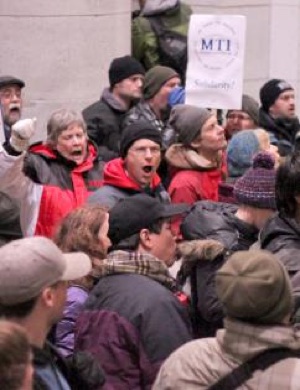 Like thousands of my fellow Cheeseheads, I leapt into action when I heard that the Senate Republicans were illegally passing a bastardized version of the Gov. Scott Walker’s “budget repair bill” on the evening of March 9. They’d locked themselves into the state Capitol and, with a bill now stripped of economic language, were set to destroy the collective bargaining rights of Wisconsin’s public-sector unions, mine included.

So I immediately jumped in the old ’97 Mazda Protégé (so much for overpaid public-sector workers) and, like the Minutemen of old, raced to the state Capitol square in a dazed fury, to stand up to this latest affront to our rights.

Only when I left the Capitol, hours after Walker’s goons had done the deed, and several thousand of us had responded by reoccupying the building, did I realize the sad truth: I’d forgotten where I parked the car.

I knew the ramp, and I vaguely remembered something about a stairwell I was convinced I’d come down, but beyond that nothing. So I wandered through a parking-garage maze straight out of Escher, feeling pretty sure, though not 100 percent, that I was walking past the same cars again and again.

And as I walked, retracing the same desperate and familiar steps, it began to remind me of the marches I’ve been on nearly continuously since Walker’s blitzkrieg began–marches of tens and hundreds of thousands of working people from across the state and the Midwest. Marches which have inspired millions across the country and led to similar, if so far smaller, marches and rallies.

Except now I was alone. Actually, not quite–I met at least a half-dozen people in the same predicament. We instantly recognized each other, promising to shout if we saw a certain Hyundai or Corolla. One, a young woman who’d finally found her car, stopped to offer me, a strange man in a dark parking ramp, a ride around to find mine–testament itself to just how much has changed here.

But I declined, the air clearing my head. And I listened to the dozens of cars a block away circling the state Capitol square and honking to the tune of the chant “this is what democracy looks like” (on your horn it’s beep-beep-beep, buh-BEEP, buh-BEEP, beep-beep. The Protégé can’t do it–something with the wiring).

And I thought: This isn’t what democracy looks like.

These bastards, pressured by our numbers and public opinion, but determined to serve their corporate leash-holders, have shown they willing to stop at nothing–to flout the law or rewrite the law or lay us off in our thousands–to shove their agenda down their throats.

And I wondered what the hell to do next–desperate as I walked again and again past the same dark subcompacts on the same two familiar, cold floors, stuck in a strategy which was useful at first, but which had led me to the same blind corners.

I’ve heard about and supported the efforts at recall, which I back for the legal pressure they bring to bear–but I fear that my state, and certainly my union, will be nothing but a smoldering hulk by the time they work. And while I praise the 14 Democratic state senators who’ve left Wisconsin to protest Walker’s attacks–giving us time to get our shit together–quite frankly, my feeling is they owe us.

I lived through eight years of Democratic control of the governorship and the state legislature, nearly a decade of cuts and concessions and betrayals. Last November’s election was a referendum on eight years of Democrats in power, and they blew it. Frankly, it galls me that this is being cast as their moment after spending years as all-too-willing co-conspirators in the attacks on working people in this state.

So I stopped, went all the way down that tantalizingly familiar stairwell, and headed for the ground floor, back to where I was when I started.

Our struggle here in Wisconsin took off when the teachers exercised their industrial muscle and walked off the job for four days, forcing their parent union to follow suit statewide. It changed us from a collection of desperate canaries in the coal mine ready to go down fighting to a mass mobilization that has inspired the world.

But, now Walker has chosen to ignore the peaceful message we’ve sent him in our tens of thousands. We need to up the ante, and we’ve all said the words, whether in whispers or chants: general strike.

Sure, it’s come to us on strange currents through the cold winter air. In leaflets and open-mic speeches by sectarian fringe groups whose disconnection from our struggle is only rivaled by their disconnection from any workplace in this city. From probing questions by Big Ed on MSNBC, who wants to threaten industrial action on our behalf, hoping for a scoop on Fox News.

But we’ve also come up with it ourselves, in our most sober and serious moments. The South Central Federation of Labor, hardly a bastion of wild-eyed, radical trade unionism, voted the first week to support a general strike if the bill was passed.

A nurse at the hospital where I work, known for bringing the biggest (and most delicious) dishes to our unit potlucks, slamming her fist down on the break room table and declared, “Maybe we ought to shut this state down.” The signs and buttons, which have popped up in their dozens at the now nearly daily rallies and marches. Oh yes, it’s out there.

And as I watched bumper after bumper go by, my steps in time with the cacophony of horns and my eyes looking for that familiar “Solidarity with Wisconsin” bumper sticker, there occurred to me that there are ante-upping, first steps we could take while we talk it over–think of it as pre-game warm-ups.

Why not “Park for Justice”? After all, Madison is built on an isthmus (look it up if you don’t know what it is). Why don’t we get a few hundred people to stop their cars on Madison’s four major thoroughfares across the isthmus, which divides east from west, and just set the parking brake? We even could talk to the firefighters about how to make sure emergency vehicles could make it through. Maybe get some of those Teamster semis to lead us in style.

It would stop anything moving through downtown. And if it was big enough, it might take days to clear–days many people couldn’t go to work. Maybe we could spend those days talking to our co-workers and union leaders, to begin to discuss and organize, making the only choice Scott Walker and his ilk are leaving working people in this state.

Well, I found the car, right there on the ground floor. So I drove home, feeling more clearheaded than when I’d arrived, and wondering how to honk the tune to “Solidarity Forever.” Hope the old Protégé’s up to it.