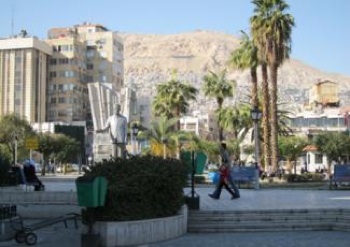 As millions of Arabs stir their respective countries with demonstrations and slogans of change and transition, certain Arab states have been generally spared, including some oil rich countries and Syria. Syria stands out as a powerful regional player without the benefit of economic prosperity and with a domestic political climate that leaves a lot to be desired. Some say it combines the heavy-handedness of the Tunisian regime, the economic woes of Egypt, the hereditary rule aspects of Morocco and Jordan, and a narrower leadership base than any other country across the Arab world. Why, then, is all relatively quiet on the Syrian front?

We can delude ourselves by resorting to facile explanations related to the threat of severe coercion facing a potential uprising in Syria—which certainly does exist. But the reality of the matter is more complex. To begin with, one must account for the unexpected: a clumsy incident involving a disproportionately brutal reaction against civilians, even in Syria, will spin structural variables out of control.

“Syria is not Egypt”

Any cursory review of the Syrian press, or the press on Syria, reveals that many Syrians empathize with the grievances of their rebellious Arab brethren and share many of them. This includes those who actually protested in small numbers and were harassed and/or beaten on Friday, February 4th, the planned “Day of Anger” in Syria, and during the few days prior. Other sporadic incidents took place in the past few weeks, but none rose to the level of an explicit anti-regime demonstration, as happened in Egypt and elsewhere. This puts Syria in stark contrast with Egypt.

Egyptian protesters grew in courage gradually as civil society snatched gains such as degrees of freedom of the press, freedom of speech, and freedom of organization and contestation by truly independent political parties, not least among whom is the Muslim Brotherhood, even if by proxy. On the other hand, Syrian civil society does not enjoy nearly the same measures of liberty. Syrian President Bashar al-Assad was correct in saying that Syria is not Egypt in a January 31 Wall Street Journal interview. The reverse is equally true.

As repressive as the government of former President Hosni Mubarak might have been, Egypt’s public space was much more open than that of Syria. Independent papers, parties, and political activists have proliferated in Egypt for the better part of the past decade, gaining adherents and mobilizing supporters via various forms of networking. With time, the components of, and room for, collective action have broadened considerably. Between 2004 and 2010 more than 6,000 small- and medium-sized protests took place throughout Egypt, most of them labor protests. Over the past decade in Egypt, these led to a level of individual and group empowerment—as well as re-politicization of the society—from which Syrians are quite removed.

In addition, while social polarization and poverty are increasing in Syria and social safety nets are deteriorating, the overall socioeconomic conditions are nowhere near those endured in Egypt. Furthermore, the heterogeneity of Syrian society (in terms of politics, region, community, sect, and ethnicity) exacerbates divisions among those affected and discourages cohesion among the opposition. Snowballing demonstrations that would dramatically raise the cost of brutal reaction in Syria are thus unlikely for the time being. As matters stand today, the calculus of the ordinary Syrian does not favor going to the streets – absent an unexpected incident of regime brutality, of course.

…Nor is it Tunisia or Libya

Individual and group decisions are not motivated solely by social connectivity, legal permissiveness, and collective action. Otherwise, Tunisia’s revolt would have not seen the light of day, as Tunisians dwelled in a security atmosphere intolerant of independent organization and collective action, much like Syria’s today. But Tunisia’s state, regime, and government did not overlap nearly as much as those of Syria do, and certainly the Tunisian coercive apparatuses and army were not as closely knit around the heights of power as they are in Syria. As a result, expecting the Syrian army/security services to jettison al-Assad as their Tunisian counterparts did to Ben Ali is simply a non-starter.

At the same time, despite the existence within both the Libyan and Syrian regimes of a will and rationale to fight for survival, state-society relationships in Syria are much thicker than those of Libya, where detachment at the top has reached delusional levels. For instance, the Syrian regime has promoted a new cross-sectarian business class often with considerable roots in traditional city quarters. If something is afoot in Syria, however, it is likely to come from the northern cities.

Discussions of Syria’s vulnerability to internal protests often posit Damascus’s resistance status to explain why Syria will be spared: i.e., that because of Syria’s confrontational stance toward Israel and the United States’ brutal policies in the region, the regime enjoys a form of Arab nationalist legitimacy. In particular, Syria’s support for Hezbollah and Hamas is considered a unique and legitimate tool for manifesting such confrontation to imperialism. After all, President Bashar al-Assad polls quite well throughout the region compared to other Arab leaders, and enjoys significant popularity among various segments of Syrian society.

Still, overemphasizing the regime “resistance legitimacy” is problematic on two counts: first, even in Egypt, where Mubarak was viewed as a U.S. protégé and Israel’s accomplice, the demonstrators did not make that point a major issue. Second, the region is entering a new era in which Syria’s confrontational stance might become less unique, as Egypt and other Arab governments take more independent positions and withdraw from the strong U.S. orbit.

It is difficult to make blanket predictions due to the constant dynamism of the factors involved. While Syria’s confrontational positions regarding Israel and the United States might be increasingly popular in the region, the citizens of democratizing Arab states will want governments that are more responsive to them regarding domestic as well as foreign policies. The Syrian government will face this growing demand in due time. For now many factors weigh against revolution in Syria, barring an extraordinary event such as an excessively violent regime reaction to a demonstration or other incident. Observers would be wise not to hold their breath.

This article was originally published on Jadliyya.com.