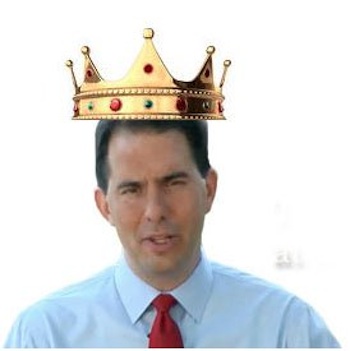 The response from the Imperial Walker administration? Go to hell. In a statement released late yesterday, Walker’s Department of Administration pledged to defy the court order and move toward implementation under their own interpretation of the law.

To recap, the Wisconsin governor has now lost thee rulings before the court, one forcing him to open the Capitol building and two enjoining the collective bargaining bill as a potential violation of the state’s open meetings law, but Walker continues to defy the courts in both cases. Worse, the GOP has taken to actively mocking the judge and the entire judicial system in a manner that is unsettling to average citizens that are required to follow orders of the court.

On Wednesday, the GOP released the most unprofessional and childish attack on a judge that this state has ever seen, offering a fake apology for prior rudeness and attempting to smear her as a cocktail-drinking liberal.

The GOP release set a new low in Wisconsin discourse and omits a key fact. Not only is Judge Maryanne Sumi a highly respected justice, she was appointed by former Republican Governor Tommy Thompson. The release was so over-the-top and the DOA’s defiance of the order so unbelievable, it is clear that the administration has decided that it’s posse on the Wisconsin Supreme Court will save them from handcuffs. But the Supreme Court is also in turmoil with a critical election pending Tuesday, April 5th.

Looking to Friends on the Supreme Court

After publicly admitting that he called the Chief Justice a “bitch” and threatened to “destroy her,” Governor Walker’s friend and mentor, Justice David Prosser, is up for election next Tuesday and is walking on thin ice. An independent expenditure TV ad accusing him of protecting a pedophile priest while serving as a District Attorney many years ago isn’t helping him either. While Prosser would have won reelection handily a few weeks ago, he has not been able to mount an effective response to the recent revelations and is up against a savvy and sympathetic Assistant Attorney General, Joanne Kloppenburg.

If Prosser loses, the court will swing in a more balanced direction. This sleeper of a race has been supercharged by the recent protests, by revelations about Prosser’s temper and now by the utter disregard the Walker administration has for justices not of their own choosing. It is doubtful that a new justice will be sworn-in in time to have an impact on the matters currently before the court, but a fair court will be critical to the battles ahead — especially for the redistricting fights anticipated in 2011.

In the longer term, many citizens are placing their hopes and their energy into the recall efforts underway across the state. In theory, there are 16 recalls underway, eight Democrats and eight Republicans. In reality, six Republicans and possibly one or two Democrats are in danger. The Democrats have reached their halfway mark for the collection of recall signatures. It appears Democrats have all the signatures they need to recall State Senator Randy “Bed” Hopper, who was discovered living out of district with his very young girlfriend (who the Walker administration helpfully employed as a new state worker). The Republican recall efforts were prompted by out-of-state groups and never had much energy behind them. If Democrats gather enough signatures, there will be elections over the summer. Democrats need to knock off three state senators to flip control of the senate and break Walker’s control of both houses.

Can I Have That Train Money Back?

The utter disregard for the rule of law and daily revelations of hypocrisy are rapidly undermining Walker as his poll numbers continue to tank. After rejecting $800 million in transportation funds in order to kill a high-speed rail line that would have employed thousands, Walker is now begging for $150 million from the federal government for – that’s right – trains. After claiming that the state is broke, this week we discovered that Walker managed to spend $42,000 flying private jets around the state, and managed to scrape together the money to hire Randy Hopper’s girlfriend, giving her a 35% raise. After stating repeatedly that his union-busting bill had nothing to do with union busting, his Senate Majority Leader, Scott Fitzgerald, admitted this week that it was all about breaking the back of the unions. Wisconsinites are worried that the out-of-control Governor is sending the state off the rails.

Will There be Handcuffs or a Coronation?

“I have a legal obligation to execute all laws pertaining to my department that have been passed by both houses of the legislature, signed by the Governor, and published into law. The Department of Justice has concluded that 2011 Wisconsin Act 10 has met those requirements and is now effective law. My legal counsel agrees with the Department of Justice’s legal reasoning and conclusions. Accordingly, it is my duty to administer that law,” explains Department of Administration Secretary Mike Huebsch as he prepared to defy the judge over the collective bargaining law.

Average citizens are not allowed to rely on their own lawyer’s interpretations of the law and defy judges. Will Judge Maryanne Sumi bring out the handcuffs for Huebsch? Will Scott Walker’s coronation be held in a formal ceremony in the Capitol rotunda? Will his friend David Prosser preside? Stay tuned.

Mary Bottari is the Director of the Center for Media and Democracy’s Real Economy Project and editor of their www.BanksterUSA.org site.

This article was originally published on CommonDreams.org from PRWatch.org.

© 2011 Center for Media and Democracy