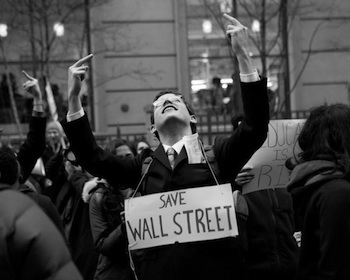 Proclaiming a new stage in the struggle of workers, students and New York City residents against decades of government cuts and lay-offs, 1,100 people took to the streets for a march connecting City Hall to Wall Street known as the Day of Rage Against the Cuts on March 24. Protesters suggested that the same old demonstrations would not create the people power that had been recently achieved in the Midwest and Middle East, but were hopeful the rally and march would be a stepping off point to direct action.

With Mayor Michael Bloomberg threatening to lay off at least forty-five hundred teachers, and the Democratic Governor Andrew Cuomo declaring what workers say is a “war on public employees,” the labor marchers decried what they saw as the bipartisanship of business interests in government.

“We need to abandon all illusions that the agenda of the Democrats is substantively different than that of the Republicans,” said Nate F., a social worker and member of AFSCME Local 768. “Both are attacking public sector workers. Both are through and through working for corporate interests, whether they’re Republican, or right-wing Democrats like Cuomo.”

Larry Holmes, of the Bail Out the People Movement, says the budget crises across the states are manufactured. He says there doesn’t need to be any cuts or lay-offs, and the obvious solution is an end to the expensive wars and tax breaks for millionaires, a sentiment echoed by a budget being passed out by the Brooklyn-based Freedom Party, which was well represented at the demonstration.

While the current round of state legislation nationwide is particularly brutal – reducing unemployment benefits, denying healthcare to hundreds of thousands of children, abrogating labor rights, choking heating, food and rental subsidies to poor – this is part of a decades-long trend of shredding social welfare programs. The difference is that many people have been inspired by the massive and militant protests in Wisconsin, Cairo and elsewhere that have targeted austerity policies and neoliberal governments.

Holmes thinks union and community leaders are gaining respect for the students who are pushing them toward direct action. “The youth are encouraging, inspiring and pushing labor… I remember 20 years ago there were lots of student occupations. Now they’re coming to unions and saying ‘We want to stand with you, so stick with us,’” Holmes said.

SUNY and CUNY administrations have often tried to suggest that resources be pulled from one school system and towards the other, but students took a completely different approach: unity.

“Cuts affect us across the board whether you’re in SUNY or CUNY. Every student is hit: how you’re taught, how many students are in your class, how many options you have to study, if you can afford to go to school anymore,” said Anthony Lino of the SUNY New Paltz organization, Students of the Final Cut. His group had been to the state capital in Albany last Wednesday where thirty-three CUNY professors and others were arrested at the doors of the State Senate, and were prepared to occupy the New York State Capitol building again this week.

Claudia Ankuwillca, 24, a Women Studies major at Hunter and member of the CUNY Mobilization Network and Resist & Multiply, suggested student solidarity went beyond the higher education system itself. “This is a manifestation of anger by marginalized students … but really, it’s also by the communities that aren’t here [at school]. CUNY used to be free, but the first year students of color forced their way in, the city began imposing tuitions in 1976,” said Ankuwillca, who had come from a rally of 75 students at the Hunter campus.

As the march reached Wall Street, several well-attired businessmen quickened their pace while others stopped to heckle. One began shouting, “This is a meritocracy! Deal!” Holly Clark, a member of the CUNY Professional Staff Congress union, shot back, “We work damn well harder than any CEO, and they don’t even think we deserve a pension.”

“We think there should be pensions for everyone. It’s not that public workers are getting too much, it’s that everybody else is getting too little,” explained Clark. “Every McDonald’s worker should have health insurance. That should be common sense.”

It was that message that rang out most often, that the direct action that was seen in Wisconsin could be built when SUNY and CUNY students, public and private sector workers, community organizations like Picture the Homeless, leftist parties, and solidarity groups like the Community Farmworker Alliance stood united and prepared to shut the city down. The only split as the protesters saw it was the one between the bottom 98%, and millionaires and the politicians who work for them.

“The mayor may be rich, but it’s workers who run the city. And if he wants to attack us, we’ll have to shut the city down,” said Nina Brown, a clerical worker and member of AFSCME DC37. “We’ll stay out here, and sleep on the street.”

“We need a General Strike now! Stop being pussies!” cried another public employee, as she carried a Green Party banner.