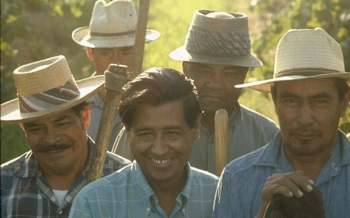 Cesar Chavez would’ve turned 84 years old today. The migrant worker, organizer and civil rights activist founded the United State’s first successful farm workers union, the United Farmworkers, and his legacy is still felt strongly in today’s blossoming immigrant rights movement.Chavez transformed the lives of thousands of farm workers across the country. Though he was small in stature — standing only 5 feet 6 inches tall  — his reach was enormous. He organized and led a national fight against enormously powerful farmers and corporations in the San Joaquin Valley of California.

He was a David fighting Goliath, and he waged his battle with love. Chavez relied on various political tools, including art, music, theater and fasting. And it worked. The country stood behind him in 1968 when he urged American consumers against buying grapes produced in the San Joaquin valley until growers agreed to unionize farm workers. By 1970, a public opinion poll found that 17 million Americans had stopped buying grapes because of the boycott.

That’s just one example of how Chavez’s work improved the lives of the countless families whose backbreaking work feeds the nation. It’s a reminder that we can do anything if proud, organized, and strategic. “You cannot uneducate the person who has learned to read. You cannot humiliate the person who has pride. You cannot oppress the people who are not afraid anymore,” Chavez famously said.