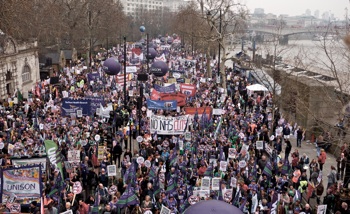 Class struggle is like gravity: we can recognize it only through its effects. When apples or wages fall, the forces of mass and class are at work. The study of class, as with gravity, is the study of movement, action and power.

Given this, the significance of the half-million strong protest in London on March 26 against the Conservative-Liberal Democrat coalition government’s many planned cuts to social services and public spending is still unknown. This most recent demonstration followed the lead of student protests late last year. The energy of the student movement took most by surprise and gave a glimmer of hope to all those who oppose the regressive policies being pursued by the current regime.

Organized by the Trades Union Congress, a trade union umbrella group, the bulk of demonstrators were public-sector workers and their families, allied private-sector workers, concerned beneficiaries of public services (especially students) and various factions of the extra-
parliamentary left. However, the class dimensions of the demonstration are not yet obvious nor are they reducible to the social-economic positions or to the intentions of those of us who were there. The class character of the demonstration will be manifest by its impact and what will follow in the months ahead.

One very encouraging aspect of the demonstration was its size. It was, by far, the largest demonstration in the U.K. since those in early 2003 opposing the impending war in Iraq. One thing is certain, however: The March 26 protest will have as little impact on policymakers as the antiwar demonstrations did. Within the “democratic” world at least, orderly popular protests have proven to be of little consequence when it comes to influencing policies.

If we accept this point, the political potential of the demonstration resides with its capacity to shape public opinion and the thinking and will of those who participated in it.

Two disparate possibilities exist. One is that many of those in attendance on March 26 will have relieved themselves of some complicity regarding the current political situation. From new Labor Party leader “Red Ed” Miliband to the hundreds of thousands of public sector workers, a key part of the demonstration was its vocal repudiation of the planned policies and cuts. Regardless of such declarations, however, it is largely these individuals, civil servants, who will be charged with executing and managing the proposed cuts and policy changes. Will they obey orders from on top?

There seems little reason to think that public employees such as doctors, nurses, teachers, academics, firefighters and social workers would not follow every command and request made of them. Some public employees, namely the police, have already shown they enjoy enforcing order as evidenced by aggressive tactics such as “kettling” and mass arrests in previous demonstrations. (In a twist, protesters turned the tables March 26, trapping groups of police a number of times.)

If this is the case, the protest would have mainly functioned to relieve a great many civil servants of guilt and trepidation when they eventually carry out the cuts. One can almost hear the refrain: We did our part, we went to London and protested, but now Parliament has spoken and we must abide by the law. Just as the war in Iraq went forward with almost no real resistance following the massive demonstrations (even though one third to one half of those in the U.K. declared themselves to be against the war) so it may very well be with the pending budget cuts.

A second possibility is that this demonstration functions as an educational moment for the anti-cuts movement. Just as the student protests served as a model and inspiration for the broader anti-cuts movement, the protests of this past week may well serve as an organizational stepping stone for future attacks against the regime. One potential scenario is a national strike of all public sector workers. Some of the more radical factions within the trade unions have issued a call for a general strike. A massive strike would greatly increase the level of conflict and put much more pressure on the government to temper or reverse its agenda.

Another possible outcome of the demonstration is the ever-increasing radicalization of students and other young dissidents. Partly as a response to the heavy-handed actions of the police and partly as a product of principled political reflection and organization, the extra-parliamentary left, especially anarchism, is on the rise. There were hundreds of mask-wearing protesters willing to engage in property destruction and risk arrest. Their occupation of Fortnum and Mason, one of the most famous stores in London, and their attack on the Ritz Hotel and dozens of stores on Oxford Street, especially those known for not paying any taxes, is a clear sign that the movement is growing. Although there may still be far to go before the streets of London look like those of Seattle in 1999 or Athens in 2008, major progress is being made.

According to the historian Karl Polanyi, the working class in Britain has been the most repressed and beaten down in all of Europe. Polanyi asserts that this has rendered them nearly incapable of any self-directed, progressive, political action. Nonetheless, we have seen flashes of political possibilities, such as the poll tax riots of 1990 that brought down Margaret Thatcher and the fierce but unsuccessful coal miners’ strike of 1984-85 that broke organized labor in the U.K.

The stakes of the current attack on working people are clear. Orderly demonstrations and petitions are not sufficient for fighting the power of the ruling classes and their wild-eyed servants within Parliament.

A new chapter in disruptive, disciplined and disorderly political action by the dominated is necessary. If marching is as far as the political efforts go, the overcrowded classrooms, shrinking universities, declining life expectancy and decreasing wages and pensions will be all the evidence we need for understanding how the class struggle in Britain is progressing.

Peter Bratsis teaches political theory at the University of Salford. He is the author of Everyday Life and the State and an editor of the journal Situations.