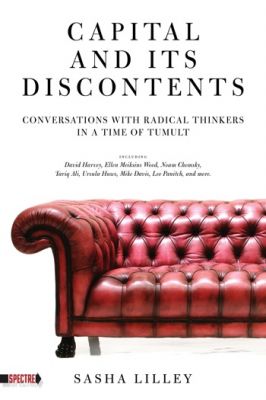 Capital and Its Discontents: Conversations with Radical Thinkers in a Time of Tumult
PM Press, 2011
Edited by Sasha Lilley

If the North American left is good at anything, it’s being discontented. And if the collapse of the left as an effective political force over recent decades has amplified our discontent, it’s also forced some radical thinkers to dig in and do the hard work of analyzing society. This section of the left is mainly (though not exclusively) based in academia and grounded in a broad Marxist tradition. Beyond fostering mere discontent, though, their aim is to increase our understanding of how the regime of capital shapes our everyday existence, how this has come to be historically and how things might be different. And in this moment of political disorientation — from illusions in the Democratic Party to the rejection of universal, emancipatory politics — we could stand to hear what they have to say.

Indeed, some of us have heard them on programs like KPFA’s Against the Grain (ATG). But with the publication of this book, edited by ATG host Sasha Lilley and largely drawn from her interviews, many more will have the chance to absorb these crucial arguments. Capital and Its Discontents: Conversations with Radical Thinkers in a Time of Tumult is by no means comprehensive (nor does it claim to be), but it does offer a fine selection of the left’s most lucid thinking, principally around questions of political economy.

The value of this book lies in its accessibility. Because each short chapter is a conversation between Lilley and her guest, key points are presented quickly, clearly and in a language that is comprehensible. In this sense, Capital and Its Discontents is the perfect book for liberals and leftists who want to move beyond superficial criticism of bad policies and greedy corporate executives and toward a structural critique of capitalism and imperialism. It’s also the perfect book for those who don’t have the time or inclination to pore over everything published by these 17 contributors, but want to gain a general sense of what the left intelligentsia is up to.

The book is arranged into three sections: “Empire, Neoliberalism, Crisis”; “Commodification, Enclosure, and the Contradictions of Capitalism”; and “Alternatives?” I won’t describe every interview, but it’s fair to say that there isn’t a weak one in the bunch. The first section begins with a solid one-two punch of Ellen Meiksins Wood and David Harvey, with the former tackling basic questions like the nature of historical capitalism and forms of empire and the latter tracing the rise of neoliberalism. Subsequent contributors situate the 2008 financial crisis within a broader crisis of capitalism that has its roots in a decades-long repression of wages, the vast expansion of debt (household and commercial) and the spectacular growth of the financial sector. The lesson here is that the current problems of capitalism are not the result of mismanagement — they have a long history arising from the inherent contradictions of a system based upon ceaseless growth and the relentless pursuit of profits above all else.

Section two explores what Lilley, in her substantial introduction, suggests is a unifying theme of the book: capital’s drive to commodify all aspects of our lives. John Bellamy Foster and Jason W. Moore describe what this means from an ecological standpoint, and Ursula Huws explains how the commodification of unpaid, mostly female, domestic labor provides the underpinnings of the modern service sector. Contributors to section three consider alternatives to the current order and touch on the complex history of state-led “national capitalism,” the legacy of the Soviet Union, the New Left’s relationship to postmodernism and anarchist visions of how to organize society.

The question of “Alternatives?” is a major one, and Lilley often concludes an interview by asking how we can rebuild the left into a force capable of challenging capital. Though responses vary, they all emphasize the need to educate people with a systemic critique of capitalism and the need to build left unity. Capital and Its Discontents is itself a major contribution toward that first goal and explicitly argues that we move toward the second through renewed cooperation between anarchists and socialists, a notion that I second. But how we get there, and how we shape our discontent into an effective anti-capitalist movement, is the biggest question of all.