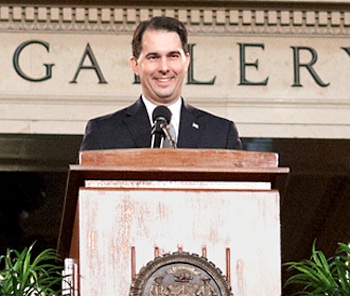 Wisconsin republicans are at it again.

Last month, Gov. Scott Walker and his co-conspirators used every trick in the book to ram through sweeping anti-union legislation aimed at public-sector workers, along with sharp cuts in health care for the poor and other austerity measures.

This month, the Walker gang is trying to steal an election for state Supreme Court justice.

Welcome to FitzWalkerstan, the new regime in Wisconsin, where the governor rides roughshod over democracy with the help of the Republican brothers who are majority leaders of the two houses of the state legislature–Jeff Fitzgerald in the Assembly and Scott Fitzgerald in the Senate.

In elections held on April 5, incumbent Supreme Court Justice David Prosser, another Walker ally, faced a strong challenge from a hastily organized campaign by Democrat JoAnne Kloppenburg. The vote totals went back and forth throughout election night and the next morning–but in the end, Kloppenburg appeared to have eked out a 204-vote victory.

Then the election took a turn straight out of an article in The Onion, the satirical newspaper that had its origins in Wisconsin’s capital city of Madison.

Shortly after Kloppenburg’s victory was announced, the county clerk in heavily Republican Waukesha County outside Milwaukee, Kathy Nickolaus, “discovered” that she had failed to count 14,000 votes tallied on her personal computer. These votes appeared to provide the margin of victory for Prosser–and by just enough to avoid an automatic recount.

A longtime Republican operative, Nickolaus is also a former employee of Prosser. Adding to the stench, Prosser hired attorney Ben Ginsburg to aid his campaign. Ginsburg worked for George W. Bush during the Florida recount in the 2000 presidential vote, which allowed Bush to steal the election and capture the White House.

Wisconsin’s election agency is investigating the debacle in Waukesha. But regardless of whether incompetence, dirty tricks or some combination of the two are responsible, the lack of democratic accountability in this vote clearly shows why more mass mobilizations are necessary to resist the Republican onslaught led by Walker and the Fitzgeralds.

Wisconsin became known around the world as the front line in the struggle against austerity and union-busting after workers and students organized an uprising against Walker’s scorched-earth attack. The weeks-long occupation of the Capitol building and huge labor mobilizations in Madison stopped the Republicans for nearly a month–by pressuring Democratic senators to flee the state, which denied Walker the quorum he needed for the original measure.

Walker’s legislation only passed because of a series of underhanded–and possibly illegal–maneuvers.

Now that Walker has formally signed his union-busting bill into law, a debate has emerged about how to respond. The legislation, which is tied up in the courts, would effectively eliminate collective bargaining rights for state workers, while imposing increased health care costs and larger pension contributions on state workers.

But Walker isn’t waiting around for a court decisions. His two-year budget proposal is a nightmare for ordinary people in Wisconsin, with cuts totaling approximately $1.7 billion.

Walker’s budget would further slash $500 million from Medicaid, impose severe cuts to health programs for low-income families and people with disabilities, and raise prescription drug costs for the elderly. Some 70,000 people would stop receiving any form of state-supported health coverage.

But faced with this blitzkrieg attack, union officials have turned away from the mobilizations that made Wisconsin an international symbol of the struggle. Instead, they have largely subordinated anti-Walker opposition to electoral efforts for Democratic Party candidates.

The Supreme Court race against Prosser was seen as a trial run for a recall campaign that will target vulnerable Republican state senators in a bid to block Walker’s control of the legislature.

Millions of pro-union Wisconsin residents and their supporters around the country want to see the Republicans run out of office. But by counterposing the recall campaign to workplace action and mass protest, union officials have demobilized the mass movement that galvanized the struggle in February.

Moreover, labor officials pressured members of public-sector unions to accept contract concessions that contained virtually all the economic givebacks that Walker had demanded–but that preserved collective bargaining rights, including unions’ ability to collect members’ dues through paycheck deductions, something banned under Walker’s law.

This turn of events has created new challenges for activists who see the need for sustained and more wide-ranging resistance.

While the union-led recall campaign is extremely popular among activists, political payback at the ballot box won’t be enough to stop Walker’s agenda. As Roger Bybee wrote for In These Times:

When the Democrats have been in power, they have failed to break out of a kinder, gentler version of worshipping the “business climate” practiced so brutally by the Republicans. While Gov. Walker marks a new low point in the state’s subservience to corporate power and contempt for the majority, we should not forget that it was Democrats who enacted the most massive corporate tax cuts in the state’s history in 1973.

In fact, Walker’s Democratic predecessor as governor, Jim Doyle, bragged to a reporter in December, “I’ve made deeper cuts than any governor’s ever made, and I’ve had to impose tougher cost controls on state employees than anybody’s made.”

Doyle, who served two terms, rescinded 2 percent pay raises for nonunion employees in 2007-09. He also imposed health insurance premiums for many employees in 2005 and raised premiums on others who were already paying them–workers’ share of premiums more than doubled from 2.5 percent in 2003 to 5.6 percent in 2011, setting the stage for a bigger increase under Walker. Similarly, Doyle compelled state employees to begin making contributions to their pensions, opening the way for Walker to dramatically increase that amount.

Doyle also imposed eight unpaid furlough days in each of the last two budget years, which amounted to a 3 percent pay cut for state workers. Some 3,000 state jobs were left unfilled, leading to a speedup for those who remained.

And because Doyle wanted further concessions from labor, the biggest union for state employees, AFSCME Council 24, was working under a contract extension when Walker took office. Walker cancelled that extension effective March 13, which will make Council 24 the first union to bear the brunt of Walker’s anti-union laws, if and when they come into effect.

Given Doyle’s record, there’s no guarantee that Democrats would repeal Walker’s destruction of collective bargaining were they to regain power. Wisconsin Democrats share the consensus of the national Democratic Party that austerity is the order of the day. The difference is the Democrats believe that concessions can be more effectively extracted from workers by keeping collective bargaining rights intact, rather than getting rid of them.

In other words, the debate between Republicans and Democrats in Wisconsin–as it is nationwide–is not over whether to impose cuts, but how much to cut and at what pace.

This is why union leaders must be pressured to fight, and activists must continue to build resistance beyond the ballot box. Working in our favor is the growing national backlash against budget-cutting governors. In Wisconsin, opinion polls continue to show that a majority of residents side with public-sector workers against Walker’s bill.

The current legal challenge keeping Walker’s law held up in the courts involves the Republicans’ violation of the state’s Open Meetings Law, which requires 24 hours’ notice of joint conference committees convened to pass legislation. In their haste to ram through the anti-union legislation, known as SB 11, Republican legislators gave the Democratic minority less than two hours to convene.

This challenge provoked a March 18 court order by Dane County Circuit Court Judge Maryann Sumi that temporarily prohibits the enforcement of SB 11 until the legal challenge could be heard.

The response of the state Department of Administration (DOA) to Sumi’s order was to publish SB 11 on the website of the state’s Legislative Reference Bureau, claiming this action made all legal challenges to the bill moot. DOA Secretary Mike Huebsch announced that SB 11 was in effect immediately, and that the state would implement the bill’s cuts and stop deducting union dues from state employees’ paychecks beginning April 23.

The DOA’s move was seen by everyone outside Walker’s immediate coterie as a blatant violation of the law, and the Republicans retreated after Judge Sumi issued another order asserting the court’s authority.

Meanwhile, Republicans launched an academic witch-hunt against a well-known scholar and outspoken public critic of SB 11, University of Wisconsin (UW) Madison history professor William Cronon. On his blog “Scholar as Citizen,” Cronon uncovered a connection between SB 11 and a conservative think tank in Washington, the American Legislative Exchange Council. Cronon also published an op-ed article critical of SB 11 in the New York Times.

In an obvious effort to intimidate Cronon and chill dissent among other scholars, Republicans used the state’s Open Records Law to try to force the university administration to hand over all correspondence Cronon wrote using his UW e-mail account that included a number of words and phrases, including “Walker,” “Budget Repair Bill,” “Recall” and so on.

The response to the attack on Cronon was immediate. The UW-Madison faculty issued a strong statement condemning what the Times labeled the GOP’s “shabby crusade,” and the UW administration defended Cronon’s right to privacy in communication with other scholars and students.

This sort of Republican overreach has invigorated opposition to Walker’s agenda. The more time passes, the more people discover how destructive SB 11 and the Republicans’ broader agenda is. For this reason, the recall threat could be meaningful if mass action from below is revitalized. According to an Associated Press report:

If Republicans lose just three seats, they would give up their 19-14 majority [in the state Senate], and with it, the power that allowed them to aggressively push the legislation through, despite ear-splitting protests that drew tens of thousands of protesters to the Capitol…

If a judge rules that the bill was improperly passed, the Senate could be forced to vote on the law again. And if two senators were to switch sides, their votes (combined with that of the sole dissenting Republican), could defeat the measure.

But these are a number of very big “ifs.” History shows that we can’t rely on the courts or the two-party system to stop corporate greed and attacks on democracy. The best strategy to fight Walker’s union-busting bill and the relentless budget cuts and right-wing legislation coming our way is to build as large and combative a resistance as possible.

A number of coalitions and networks are working together to cohere this resistance, organizing educational events, rallies, marches and direct actions.

One group, the labor-backed We Are Wisconsin, is focused primarily on the recall effort.

Other groups are taking a more activist approach. On April 9-10, several hundred people participated in a People’s Assembly in Madison sponsored by Wisconsin Wave, which featured an inspiring rally and series of excellent workshops on fighting austerity and building a mass movement.

The People’s Assembly was much smaller than it could have been, however, because union leaders prioritized gathering signatures for the recall campaigns over mass mobilization and educating their membership and the public about the impact of Walker’s agenda.

But more grassroots initiatives are taking shape. A community-labor network led by National Nurses United has drafted a strong anti-cuts statement for trade unionists to bring to their unions. The coalition Wisconsin Resists and U.S. UnCut are working to turn tax day on April 18 into “Tax the Rich Day,” organizing actions against banks and companies that don’t pay taxes, and helping to organize a counter-rally against the Tea Party on April 16.

While modest in size and strength, efforts like these represent the necessary building blocks to renewing the struggle against Walker’s agenda.