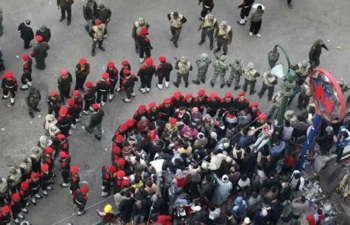 It’s time to return to Downtown Cairo. There are signs that the romance of the Arab Spring is already cooling off. Many activists who braved beatings and arrests to oust a dictator fear their civil society’s rebirth may be smothered before taking its first breath.  A proposed ban on strikes appears to expand the rollback on civil and labor rights that has steadily undermined this winter’s victory at Tahrir Square.

Activists fear that the pending draft decree, which would sharply restrict and penalize strike actions, would destroy workers’ leverage in pressuring employers and the government on wages and working conditions. Labor demonstrations were a critical weapon in the recent uprising as well as under previous authoritarian regimes.

Egypt’s leading independent labor organization, Center for Trade Union and Workers’ Services, declared on March 23 that the draft decree, though the exact wording had not been made public, echoed a sordid history of labor oppression, particularly a similar law that criminalized industrial actions which Mubarak invoked to suppress protests

The Egyptian workers have struggled for decades to maintain the right to strike. They paid the price when they were imprisoned, transferred or killed….

Article 124 of the Egyptian Penal Law which criminalizes the right to strike is a witness that the regime was reactionary and had the fingerprints of the 19th century….

Article 124 of the Egyptian Penal Law which is not different from the suggested draft law was a curse in the history of the regime in Egypt. …

The Egyptian workers did not start to move after 25th January 2011. On the contrary, they were on the vanguard of the revolution until it reached its summit and would not stop until the realization of the workers demands or at least the workers are assured that their demands are on the way for achievement.

The draft law is one of many troubling developments driving a renewal of grassroots activism, now that the revolution’s first wave is ebbing. Organizers launched the “Save the Revolution Friday” rally today, according to Ahram Online, to counter the governing elite’s plans to resurrect the old order under a renovated facade:

The purpose of the event, [activists] say, is to press on with the rest of the revolution’s demands, rid Egypt of the “institution of corruption” with all its figures and symbols and to challenge the counter-revolution initiated by the old regime which, they say, is playing behind the scenes to end the Egyptian revolution.

“The Egyptian people will not accept the laundering of the old regime and presenting it back to them in a new form,” wrote the group in the invitation, explaining that they insist on the complete removal of the remnants of Mubarak’s regime from every institution in the country.

This will lead to a legal disaster by all international labour standards and it will disgrace Egypt in the view of the international community.

We urge the Egyptian government to withdraw the said draft decree, and we appeal to the Supreme Council of Armed Forces not to issue it. Instead we would like to see a development of appropriate mechanisms for  negotiations between the social partners.

This proposed decree is a serious infringement of fundamental trade union rights and as a member of the ILO, Egypt is bound by international treaties, and we remind you that your government must fulfil its obligations and respect trade union rights.

But an appeal to international law is easily silenced under the imposition of “emergency” authority. With the entire political system in flux, the military has begun to mobilize against activists under the pretext of maintaining order, putting the revolution itself at risk of being co-opted or  dismantled in the “reform” process.

Now is the time to rethink civil society’s hierarchy of needs. Will embattled Egyptians slip back into conservative “stability” at the price of autocracy? Or will people’s movements plow forward by establishing human rights, building workplace democracy, and breaking the corrupt ties between capital and the state?

Yet in neighboring Tunisia, an awakening in the labor movement may be underway. As Seth Sandronsky reported recently, the Tunisian General Labor Union (UGTT) has taken a leading role in both the overthrow of the old regime and the formation of a democratic government, and recently have begun networking with U.S. unions. Last month Tunisia also hosted the launch of the Arab Women’s Trade Union Network. The coalition focuses on the nexus of gender inequality and labor rights in Arab societies, where women’s oppression is compounded by economic exploitation.

So there’s a lot of work left to do for the global labor movement in the emerging political structures of Egypt and Tunisia—and all the other countries in the throes of political upheaval. And activists can’t do it without securing the power of independent collective action.

Egypt’s is not the only government that has sought to preempt the power to strike and protest through legislation. According to the ITUC’s 2010 Survey of Trade Union Rights:

Severe restrictions or outright prohibition of strikes also exists in a large number of countries. Furthermore, complex procedural requirements, imposition of compulsory arbitration and the use of excessively broad definitions of “essential services” provisions often make the exercise of trade union rights impossible in practice, depriving workers of their legitimate rights to union representation and participation in industrial action.

Egypt’s democratic vision turns on the struggles for both social and economic justice, and the power to strike is the focal point where labor and civil rights converge. The country’s workers face a process of social democratization that even “developed” democracies haven’t realized (see Wisconsin). The world is dotted with Liberation Squares, where the arc of revolution, or counterrevolution, is measured in the strength of labor.