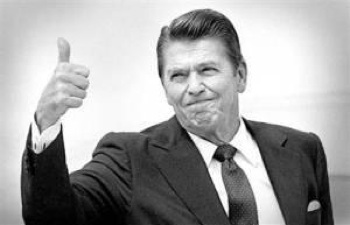 In the middle of the 1982 recession, with the worst unemployment since the Depression, Ronald Reagan gravely looked into the camera and told us that prosperity was right around the corner.

Reagan famously declared it was “Morning in America,” and ribbed opponents for being pessimistic.

We haven’t heard much about that recently from Reagan’s political heirs. Instead politicians and pundits are falling all over themselves to lower our expectations.

Paul Ryan, the Republicans’ chief budget-cutter, tells Americans they’re going to have to live worse than their grandparents. Bedrock old-age protections like Social Security and Medicare? “We’re going to have to come to grips with the fact that these programs cannot exist,” Ryan says.

In Washington, leaders of the two parties settled on $39 billion in budget cuts over the weekend. They will hit transportation, education, health, and labor rights enforcement programs.

The politicians are remarkably grim, given the unimaginable quantity of cash overtopping the vaults of the very rich, and crowding the coffers of large corporations like GE that pay no taxes at all.

Still, the pundits tell us that since most private sector workers no longer have real pensions, government workers should lose theirs, too. They quote irate taxpayers: “Why am I paying taxes so public sector workers can have something I don’t?” The Associated Press calls it “pension envy,” and its final result is clear: no pensions to envy.

And as sure as the sun sets in the west, politicians tell us, the cost of health insurance is destined to eat away at our paychecks.

This is the kind of rhetorical about-face that makes you wonder. Has the right abandoned the sunny rhetoric about the ever-upward climb of our economy and the endless inventiveness of U.S. capitalism? Whatever happened to the mythical rising tide that was supposed to lift all boats?

Now the water’s going out, and it’s only greedy public school teachers and overpaid union carpenters who are stuck in the past, imagining that for a hard day’s work they should get health care, a pension, a decent wage, and some respect on the job.

We’re told it’s in the interests of U.S. “competitiveness” to get rid of unions, which are keeping wages “artificially high.” But for 40 years, pay has been eroding for working people.

Next stop: getting rid of that “job killing” minimum wage. In Maine, Republicans are trying to pass a six-month “training wage” of $5.25 for workers under 20 (instead of the state $7.50 minimum wage).

Better yet, no onerous government regulations around child labor. A Missouri state senator introduced a bill to make it legal to employ workers under 14.

The labor movement should be able to make hay while the six-figure pundits try to sort out their confused message: The United States is the greatest country in the history of the world, but you need to take a wage cut and forget about retirement. (The Democratic version is: take a wage freeze and retire later.) To make up the shortfall, why not send your children out to work?

The “vision thing” suddenly belongs to protesters in Wisconsin, Indiana, and Ohio, those incurable optimists who say this country can do a lot better, and we can find the money by taxing the rich. Better than the Republicans, better than the tax-cutting, budget-slashing Democrats, yes, we can.