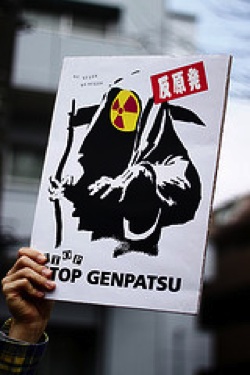 Today marks exactly a month since the nuclear power disaster in Japan began. Along with the ongoing discharges of radioactivity from the Fukushima nuclear plant complex, there has been a largely outrageous flow of media coverage.

Brian Williams on NBC Nightly News on April 6th asked a good question: “And what about all that water, the many million gallons of it, highly radioactive, dumped in the Pacific Ocean for days on end—and we’ve all been told it will dissipate. But how can this not be harmful?” he queried correspondent Miguel Almaguer.

The question might have been good but the response to it, Almaguer’s report, was far from that. He presented a talking head expert, Luca Centurioni of Scripps Institution of Oceanography, who said: “No, there is no immediate danger.” (Centurioni’s background, according to his resume posted on the Internet, reflects no background in radioactivity.)

“The bottom line,” said Almaguer, “experts are in agreement there’s no threat to our water or our food.” He added: “And as you can see Brian, California’s coastline is as beautiful as ever.” Radioactivity, of course, is invisible.

Or consider Charles Osgood on “The Osgood File” on CBS radio on April 1—stressing that there was nothing to fear but fear.  Indeed, he played President Franklin D. Roosevelt’s declaration in 1933 that “the only thing we have to fear is fear itself.” That might have been a reasonable reassurance amid the Depression. But here were the first indications of radioactivity having come to the U.S. from Japan with radioactive iodine being “found in milk in the states of California and Washington,” noted Osgood.

But, he quickly added, “the contamination is described as miniscule, posing no threat to the public.” To bolster that assertion he presented Blair Thompson, “spokesman for the Washington Dairy Products Commission.”

“Radiation can be a scary word, but I think it’s important to remember that actually we live surrounded by radiation every day,” said milk industry PR man Thompson.

Indeed, chirped Osgood: “Some of our most common foods—potatoes, carrots, bananas and Brazil nuts—contain radioactive potassium.”

Yes, there is naturally occurring “background radiation” of various sorts—and that causes a level of cancer. As the Nuclear Information and Resource Service (www.nirs.org) states: “Even exposure to background radiation causes some cancers. Additional exposures cause additional risks.” Cited is a 700-page 2005 National Academy of Sciences report, “Health Risks from Exposure to Low Levels of Ionizing Radiation,” that concluded that: “There is no safe level or threshold of ionizing radiation exposure.” There have been numerous similar reports.

And not only were reporter after reporter over the past month unaware of the facts about radioactivity, the experts they presented were quite a crew, too.

Consider David Brenner. He was on PBS Nightly News on March 18, two days after being featured in the New York Times story about him headlined: “Countering Radiation Fears With Just the Facts.” In the article, he was quoted as saying “I think there is a role for safe nuclear power.” Just a fact?  Clearly, he was ready for TV, too.

Asked by Jeffrey Brown about “the plutonium found in the ground” around the Fukushima nuclear plants, Dr. Brenner, director of the Center for Radiological Research at Columbia University, responded: “Well, there are various sources that the plutonium could have come from. But I think we’re relieved that the levels of plutonium are actually very low, and actually, typical of plutonium—natural plutonium contamination in this country.”

Plutonium is the most lethal of all radioactive substances. There is no level “actually very low.” A millionth of a gram inhaled, a microscopic particle, is all that’s needed to produce lung cancer. Furthermore, there is no “natural plutonium contamination in this country.”

Plutonium is a manmade substance. It was discovered by Glenn Seaborg in 1941 and used in the atomic bomb dropped on Nagasaki and almost all atomic weapons since. Plutonium-239 is what Uranium-238 can become when in the proximity of fission.

Nuclear power plants build up 500 to 1,000 pounds of plutonium every year. Indeed, the concept for nuclear power plants came from the plutonium production reactors built at the Hanford reservation in the state of Washington during the Manhattan Project crash program of World War II to build atomic bombs. Also produced in those reactors were large amounts of heat. With the war over, seeking to do more with nuclear technology than just build more nuclear weapons, the scientists, engineers and corporate contractors of the Manhattan Project—which became the Atomic Energy Commission—pushed a scheme to use that heat to boil water to turn a turbine and generate electricity.

Among their schemes, too, has been using plutonium as fuel in nuclear plants for the same reason plutonium was turned to by the Manhattan Project: limits of high-grade uranium.  Manmade plutonium has been seen as the fuel for what’s called “breeder” reactors.

Meanwhile, amid all the disinformation  about radioactivity there has been the effort by most of media to frame a debate between nuclear and coal—choose your poison. In fact, the energy debate is between nuclear, coal and oil, on one side, and safe, clean, renewable energy technologies, led by solar and wind, on the other.

But you wouldn’t know that from media reports over the past month. The New York Times, for example, devoted part of a long “Science Times” article on March 29 to what the subhead stated: “Alternatives Carry Risks Too.” It said: “Radiation is a real threat, nuclear physicists say, but not as great as many people believe it is, and not as great as other threats. Indeed, every energy source comes with dangers, from mine or wellhead or the smokestack or tailpipe.” The piece went on to discuss coal-mining accidents and gas pipeline explosions. There was not a mention of the safe, clean energy technologies such as solar and wind.

Editorial cartoonist Walt Handelsmann in Newsday on April 4 went even further, drawing a picture of two pieces of wood with the caption: “Looking for cheap, risk free, all-natural, abundant energy…Start rubbing.” That’s not the choice.

As Lester Brown, president of Earth Policy Institute, concludes in his new book, World on the Edge: How to Prevent Environmental and Economic Collapse—as have many studies and reports—solar, wind and geothermal energy can provide all the energy the world’s needs. He dismisses nuclear power as too expensive and dangerous.

It not only can happen, it is happening, emphasizes Brown. “The old energy economy, fueled by oil, coal, and natural gas, is being replaced with an economy powered by wind, solar, and geothermal energy. Despite the global economic crisis, this energy transition is moving at a pace and on a scale that we could not have imagined even two years ago.”

But the real energy choices were largely not being discussed by media through the past month of Fukushima disinformation.

The classic book on disinformation on nuclear technology is Nukespeak, published in 1982. It is dedicated to George Orwell, author of 1984, and written by Stephen Hilgarten, Richard C. Bell and Rory O’Connor.

It opens by declaring that “the history of nuclear development has been profoundly shaped by the manipulation through official secrecy and extensive public-relations campaigns. Nukespeak and the use of information-management techniques have consistently distorted the debate over nuclear weapons and nuclear power. Time and time again, nuclear developers have confused their hopes with reality, publicly presented their expectations and assumptions as facts, covered up damaging information, harassed and fired scientists who disagreed with established policy, refused to recognize the existence of problems…claimed that there was no choice but to follow their policies.”

In the first month of the Fukushima disaster, there’s been an explosion of Nukespeak by the nuclear power establishment aided and abetted by a compliant media.

Karl Grossman, professor of journalism at the State University of New York/College at Old Westbury, has long specialized in doing investigative reporting on nuclear technology. He is the author of Cover Up: What You Are Not Supposed to Know About Nuclear Power. He is the host of the nationally aired TV program, Enviro Close-Up (envirovideo.com).