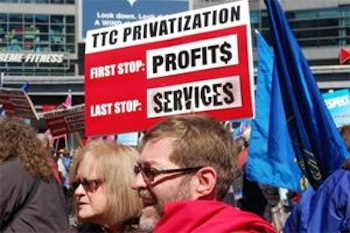 More than 100 transit activists met in Washington, D.C. in mid-March for the Amalgamated Transit Union’s “boot camp,” learning how to build coalitions between transit workers and transit riders.

Responding to the near-universal threat of budget cuts and privatization of transit systems, International President Larry Hanley wrote, “We want to create a very ambitious plan that stretches people’s imaginations. We have the best story in town. We just have to stop just saying it to each other, and say it to those outside our circle.”

Hanley, elected last fall, has called transit “the greenest job you’re going to find” and has long advocated alliances with the riding public to improve service, save jobs, and ensure a future for public transit.

More than 3,000 transit workers have been laid off in the current recession.

This was the ATU’s second gathering of the sort since October. The international is giving incentives to locals who begin working with the community by matching the political action funds that locals devote to this work.

An anti-privatization struggle in Toronto last fall was held up as a successful model. A budget crisis was happening in the midst of a mayoral race. Three of the four candidates were proposing some version of privatization of the transit system. The ATU local launched a Public Transit Coalition campaign that involved 12,000 individual members and diverse organizations such as the Chinese Canadian National Council, Federation of Metro Tenants, Canadian Federation of Students, and Canadian Association of Physicians for the Environment.

The coalition put on an internet and media campaign that included an 18-minute film with an anti-privatization message, shown on the buses. Because advertising is allowed on the buses, management could not object to the union’s access to riders. Those who watched the video on the ATU website and answered a few questions were eligible for a prize, a monthly transit pass. By the end of the mayoral race, privatization was off the table and none of the candidates were speaking for it.

Atlanta was represented at the D.C. meeting by the ATU local president and members of the Clayton County Transit Riders Union, Atlanta Public Sector Alliance, and Atlantans Building Leadership for Empowerment.

Atlanta’s transit system (MARTA) is trapped in a downward spiral of service cuts and fare increases. Because of state legislators’ racism toward Atlanta, MARTA is the largest transit system in the country that receives no operating help from the state.

Last year MARTA made the deepest cuts in its history, eliminating 40 bus routes, increasing wait times for trains, and closing bathrooms in 29 stations. The workforce was cut by 14 percent, with 300 laid off.

In particular, disabled riders have had big problems with the system, including accessibility to buses and trains, broken-down equipment such as elevators not working, poor communication, and no accountability. Because of poor planning on management’s part, operators are given unrealistic schedules, resulting in late pick-ups and operator stress.

Bringing the lessons of the D.C. meeting home, Atlanta transit activists strategized at the April meeting of Concerned Transit Riders for Equal Access. The meeting was made up of disability rights activists, ATU members, the Atlanta Public Sector Alliance, and a teacher representing Metro Atlantans for Public Schools.

Riders and workers began engaging each other. Both sides targeted the problems caused by MARTA management that result in poor service and low morale. “They are trying to make us do more work with less people,” said ATU executive board member Mark Fitzgerald. “Insurance costs are doubled. People’s job security is threatened,” said shop steward David Roseboro, adding that MARTA Mobility—which provides service to the disabled—has the highest turnover of any department.

The Atlanta Public Sector Alliance outlined how global economic problems are driving cuts at the local level. The alliance advocates a “human rights” approach to building a movement, holding government institutions accountable for protecting and fulfilling basic human rights—such as mobility—and promoting reallocation of resources and progressive taxation to address the crisis. As the Toronto Public Transit Coalition puts it, “All governments have a responsibility to fund public transit adequately to ensure a high level of service and affordable fares.”

A committee of riders and workers will widen their reach by flyering in MARTA workplaces, on buses, and at retirement apartments where many disability rights activists live. These public sector workers are intent on using the potential to build power by uniting with the people they serve.

Paul McLennan is a retired bus mechanic and member of ATU Local 732.