Imagine north Japan, muddy tides receding from wrecked towns and stepping through the rubble is conservative media star Glenn Beck. Nearby a woman weeps over a home that looks like spilled toothpicks after being smashed by the tsunami. Beck puts his hand on her shoulder, “Whether you call it Gaia or whether you call it Jesus – there’s a message being sent.” He nudges her chin so he can look her into her puffy eyes, “What do you say we follow the big top ten. You can call them Moses’ Ten Commandments.”

After the March 11th tsunami rolled through north Japan, Glen Beck chortled those words on his Monday April 14th radio show. He was not the first religious conservative to interpret natural disasters as a warning from God. Pat Robertson said the 2010 earthquake in Haiti was caused by Haitians who made a pact with the devil to be freed from the French. In 2004, Anglican Dean Phillip Jensen said the tsunami that killed 230,000 people in fourteen southeast nations was a sign of God’s Judgment. How can religious Conservatives look on lives destroyed by nature and see sinners who deserve disaster? We have to ask; does their religious faith turn history into a theological snuff film?

A snuff film is a movie that shows the real murder of a person. Big in the 70’s, the first movie to use it as a theme was the 1960 film “Peeping Tom” whose protagonist was a serial killer recording his murders. The genre peaked in 1976 with the release of the movie “Snuff”, a low-budget splatter fest re-released as a snuff film. Disgust, shame, titillation and an aura of danger attracted mostly male audiences into the theater but the “death” was always a false gimmick. 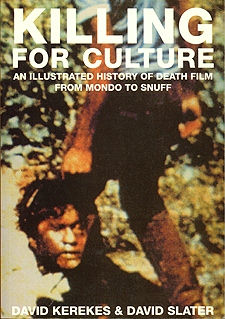 But even as viewers debated if the blood was real, critics had questions about the viewers. Why did they see these films? What was the pay-off? One answer is that a snuff film is different from pseudo-documentaries like 1980’s Faces of Death in that the “death” is staged for the viewer. Instead of being a passive bystander, a viewer can channel their sadism vicariously through the killer and imagine themselves emerging blood soaked from other’s death.

The desire to have punishment staged for one’s viewing and derive pleasure from it is what links snuff films to religious fundamentalism. Whether it’s the 65 million copies sold “Left Behind” series in which cities, brimming with sinners are bombed during the End Times as the saved are whisked away or Reverend Jerry Falwell saying, “AIDS is not just God’s punishment for homosexuals, it is God’s punishment for the society that tolerates homosexuals,” we see a relish for violence.

Why the rage? Why the desire for a red dawn of cities burning? Why the hunger for corpses piled in the street as one flies to Heaven?

When a natural disaster is interpreted as God staging the punishment of sinners for one’s viewing; it gives the believer the thrill of righteousness. Fundamentalism cleaves humanity into the saved and fallen. It creates a dynamic in which the death of the profane world is proof of one’s own salvation. But what’s really being obliterated is the part of one’s self that had to be repressed to enter into grace.

The pleasure in seeing others punished for sins is in direct relation to one’s desire to commit them. Critical theorist Slavoj Zizek wrote in “Did Somebody Say Totalitarianism?” that “A paradox is discernible in the Christian super-ego…When we obey the law, we do so as part of a desperate strategy to fight against our own desire to transgress it, so the more rigorously we obey the Law, the more we bear witness to the fact that, deep within ourselves, we feel the pressure of the desire to indulge in sin.”

A personality split by the law and a part of it repressed in a pressurized psyche, increasingly enraged and needing release. The target must reflect the buried desire which is why Freud wrote that in sadism, “The pains inflicted on other people are enjoyed masochistically by the subject through his identification of himself with his suffering subject.”

Looking for the End Times is a search for a final purging, a time when one is released from this struggle against oneself. Jesus flies to Earth with his sad eyes and golden hair, scooping his children in his arms as nuclear bombs flash in the sky. Sinners writhe in fiery torment as the saved sit on a cloud enjoying the air condition of Heaven. The Apocalypse plot-line is a deeply sadistic vision. 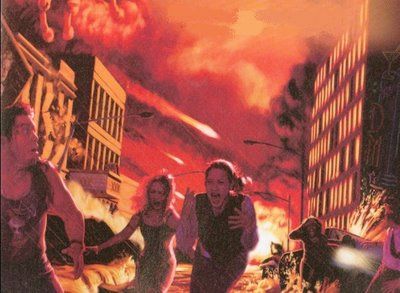 It’s also a common one, so much so that each new natural disaster is read as a Sign. On March 14th Tokyo governor Shintaro Ishihara said the tsunami was God’s punishment for Japan’s “egoism”. On March 15th candidate for El Paso City Council Malcolm McGregor III said that Japan was not protected by God and the earthquake was a sign of the Last Days. March 18th Rev. Franklin Graham said, “What are the signs of Christ’s Second Coming? War and famine and earthquakes escalating like labor pains.” On the morning show The View, co-host Sherri Sheperd said, “As a Christian we look at things spiritually. I’m hesitant to speak for God to say he’s punishing people but we do look at things that happen, these disasters and is Jesus coming? Is it closer because in the Bible it talks about the Signs of the Times.”

The danger of the Apocalyptic plot-line is that as climate disruption turns land to sand and rising tides sweep away millions the panicked masses might listen to Christian Conservatives like Glen Beck and Sherri Sheperd. Instead of seeing industry caused disasters they’ll see signs of God’s Will. If so what happens when soil erosion or over-fishing collapses food production? Will blocs of working people align themselves with the ruling elite in a religious-fascist movement? Will they will be looking for sinners or the Anti-Christ and if so who will they discover to play those roles? Will it be you?

The more power they get, the more we will be recruited to play a part in their narrative. The End Times is the final scene that religious eagerly await because it means the end of the struggle against their own desires. It doesn’t matter that the proof comes in the form of people killed by earthquake or tsunami or a disease; they are watching God’s Snuff film and damn it if it doesn’t feel good to be saved.

And yes this thinking exists on the Left. We who critique materialism, racism, sexism, homophobia and cruel hierarchies of any kind are also shaped by them, even benefit from them. So we too look for the End Times, in the form of The Revolution or the Marxist End of History or a Race War. Malcolm X cackled in a speech how, “Airplanes falling out of the sky filled with white people those are signs from God, those are blessings from God.” And in 1934 an rattling earthquake shook the Bihar state in India. Homes were broken into heaps, people held empty food bowls to visitors passing by, one of which was Gandhi. He told a crowd that the earthquake was God’s punishment for the caste system in which millions were segregated as untouchables. As I read that I imagined a man standing up in Gandhi’s audience, his clothes ragged, eyes hollowed by horror and saying, “But dear Mahatma, I’ve lost my family in the rubble and I’m untouchable.” 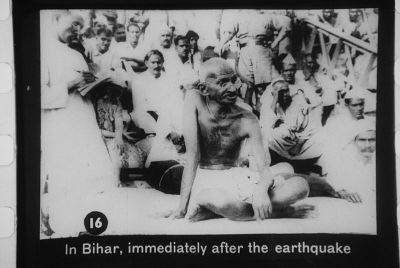