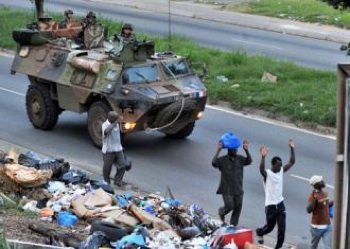 The former president of Ivory Coast who refused to accept the results of a November election and continued to rule over the West African country has been arrested after a military assault led by French and UN forces.

The media portrayed the capture of Laurent Gbagbo as a victory for democracy. But both sides have been guilty of violence and repression during the escalating conflict since the disputed vote. And Western governments didn’t intervene on the side of Gbagbo’s rival Alassane Ouattara to see justice done, but to safeguard the financial interests of multinational corporations and ensure the continued dominance of France, Ivory Coast’s former colonial ruler.

Ouattara will take power in the Ivory Coast–or Côte d’Ivoire, as it is known in French–indebted to imperialism, and with little control over Ivorian fighters who were loyal to him during the post-election civil war, and who are now reportedly exacting revenge on supporters of Gbagbo. As Ugandan writer and broadcaster Kalundi Serumaga wrote in an article for CounterPunch, “The ultimate tragedy for Côte d’Ivoire is not that Gbagbo had to be driven out by force of arms, but that someone else has replaced him by the same means.”

Ouattara won a November 28 runoff election for the presidency by a narrow 54 percent margin according to results accepted as official by the UN. But Gbagbo claimed that vote fraud in the northern part of the country, where Ouattara has his base, cost him the election. The country’s Constitutional Council–under the control of a supporter of Gbagbo–annulled hundreds of thousands of votes for Ouattara, enough to declare Gbagbo the winner.

Both men claimed to be the official head of state and set up parallel governments–though Ouattara’s operated out of a hotel in the city of Abidjan and was dependent on protection from UN peacekeeping forces who have been stationed in Ivory Coast since the country’s 2002-2003 civil war.

Gbagbo used his control over the central government apparatus to repress Ouattara supporters, but both sides have been implicated as violence escalated this year. In fact, in the single-worst massacre of the renewed civil war–in the Western town of Duékoué, where more than 800 people were found shot to death or killed with machetes at the end of March–UN officials blamed Ouattara followers for the killings and demanded that the president hold his supporters accountable.

Foreign Policy‘s Elizabeth Dickenson pointed out that while the media have singled out Gbagbo for the atrocities his soldiers have committed:

it’s important not to forget that Ouattara-loyal forces are also fighting…When I was in Liberia earlier this months, officials in the peacekeeping mission there were adamant that refugees fleeing into that country [from Ivory Coast] were of all political persuasions–meaning that Gbagbo-supporting civilians feared for their lives under pro-Ouattara forces, just as the opposite was also true.

In spite of these circumstances, the UN and its military force of nearly 10,000 “peacekeepers” intervened decisively on Ouattara’s side following the election, when the European Union and the U.S. officially recognized his administration over Gbagbo’s. Over the past month, the superior weaponry of UN forces–as well as French troops, who have had an ongoing presence in Ivory Coast since the end of direct colonial rule 50 years ago–began to tip the balance.

Gbagbo was arrested at his home in Abidjan, the country’s major city on the southern ocean coast, on April 11. Both Ivorian and UN officials claim that soldiers loyal to Ouattara carried out the arrest, not French troops, as the media initially reported.

But even if this is true, UN and French forces cleared the way with a series of military assaults–officially coming in response to UN Secretary General Ban Ki-moon’s authorization of the use of force to stop “threats to civilians.”

Under this “humanitarian” cover, UN and French attack helicopters twice targeted the presidential palace and Gbagbo’s residence for bombardment. The former president’s actual arrest was preceded by a column of more than two dozen armored vehicles advancing on Gbagbo’s compound from the French military base in Ivory Coast.

For more than a century, France has used superior firepower to determine who will rule Ivory Coast. Just seven years ago, in the aftermath of the civil war, French troops carried out a massacre that cost the lives of as many as 70 Ivorians, and the commander of French forces in the country was suspended after helping in the cover-up of the possible execution of an Ivorian prisoner.

To many Ivorians–whatever they think of Gbagbo–the arrest of the former president will look like the latest example of the French empire’s long reach.

Kalundi Serumaga pointed out another “historical resonance” in the latest Western intervention in Africa: “That the economic goods of the region have always held more importance to the world than the people actually living there.”

With the largest economy among the former French colonies of sub-Saharan Africa, Ivory Coast is especially rich in a commodity dear to Western markets: cocoa. The country produces more cocoa than any other, accounting for more than one-third of the world’s supply.

This could help explain why, despite the fact that the people are politically split nearly 50-50, the Western powers are for once determined to see an African election result, however marginal, implemented to the fullest extent of whatever military might can be mustered. All this in defense of not even an economy, but of a commodity to which some wretched African voters find themselves harnessed.

The cocoa economy is responsible for heightening the tensions between the North and South of the country that were at the roots of the bloody civil war in 2002-03, and that underlay the battle between Ouattara and Gbagbo.

From Ivory Coast’s beginning as an independent country in 1960, its economy has been dependent on a large population of immigrants, particularly from neighboring Mali and Burkina Faso to the north. According to SocialistWorker.org’s Matt Swagler, the “foreign” African population in Ivory Coast was already one-quarter of the total in 1965, and it has grown in proportion since. Between one-half and two-thirds of the rural labor force–vital to the flow of cocoa–is made up of immigrants.

As Swagler wrote earlier this year:

The crisis–then and now–has been driven primarily by unemployment, a growing wealth divide, and the discrimination faced by many Northern residents who are, or are presumed to be, immigrants from neighboring countries. These “Northern” populations are the backbone of the Ivorian labor force, producing vast profits for foreign and Ivorian elites, while facing the greatest poverty and instability.

Ouattara draws much of his support from this section of the population, who hope he will lift them out of second-class status. Hailing from the north of Ivory Coast, Ouattara himself has been accused of being “non-Ivorian” by his political opponents.

Those opponents include Gbagbo, who, after a decade in power, was facing growing disillusion and anger as the UN-administered elections approached last year.

Ironically, the former trade union and opposition leader won the presidency 10 years before in a mirror image of today–Ivory Coast’s then-military leader Robert Guéï tried to deny Gbagbo’s victory and stay in power. Ultimately, popular protests forced Guéï to back down, and Gbagbo took office.

But as Swagler reports, “over the past decade, Gbagbo has embraced both the profiteering of foreign corporations and the xenophobia encouraged by his predecessors. Despite his ‘anti-imperial’ claims today, Gbagbo has been quite accommodating to French capitalism.” U.S. corporations also extended their reach under Gbagbo–not only agribusinesses like ADM and Cargill seeking greater investments in cocoa and coffee, but U.S. oil companies involved in exploration and drilling off the country’s Atlantic coast.

With Gbagbo ratcheting up the scapegoating of “foreigners,” Ouattara had a strong base among the disproportionately working-class residents of the North, especially those with roots in Mali, Burkina Faso and other countries.

But Ouattara is no rebel. He previously served as prime minister for three years at the end of the 33-year reign of President Félix Houphouët-Boigny, who took office after independence and followed an highly pro-business agenda, in collaboration with the former colonial rulers.

For more than 20 years before that, and again for five years after, Ouattara was a high-ranking official at the International Monetary Fund (IMF). He served at the IMF at the high point of its devastating structural adjustment programs in sub-Saharan Africa to cut social services and lower trade barriers to foreign imports from Europe and the U.S.

With ties to the French government that are, if anything, stronger than Gbagbo’s, Ouattara is sure to champion the kind of pro-business, pro-free trade policies that have impoverished Ivory Coast along with all of sub-Saharan Africa–including the rural labor force of the North that supported him.

This helps explains why France and the U.S. tilted toward Ouattara even though Gbagbo had proved a pliable supporter of Western business interests. As Maurice Fahe, a member of the Worker’s Party of Ivory Coast, told Matt Swagler earlier this year:

The current position of France and the USA has nothing to do with democracy. The idea is to use “democracy” to promote the person that they think is the most capable of realizing favorable conditions for pillage. The problem with Gbagbo is that he has been unable to resolve internal contradictions, to bring the order necessary for the pursuit of the peaceful plundering of the country.

Gbagbo is guilty of many crimes as president of Ivory Coast, but Ouattara will not be a greater champion for the country’s poor and working class–and his rise to the presidency thanks to Western intervention is no victory for democracy.