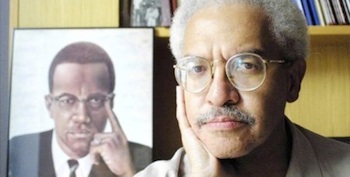 Every so often there is someone you get to know and you just have this deep sense that you will be on the same road with them for the duration.  And when death joins you on that road no matter how prepared you think that you are, it always feels as if someone hit you with their fist in your stomach.  Not only is there a degree of shock but your breath is taken away and, at least for a moment, it is difficult to stand tall.  And then you realize that you have to proceed on that same road, but without them.

I have written many commentaries commemorating the life and work of various heroes and heroines of the movements for social justice.  This, however, is the most difficult, and not because I have little to say.  Rather, this commentary concerns someone who was a very close friend and colleague, someone for whom I had the greatest respect, and someone who never held his brilliance over my head as a weapon of any kind.

There will be many tributes to Manning Marable.  They will tell you, as they should, of the exceptional work that he produced.  The mere fact that his passing made the front page of the April 2nd New York Times  says so much about the scope of the work and significance of someone who was an unapologetic Black leftist.

Manning was an incredible mentor to so many people.  He was successful at this because he was such a good listener.  He was someone who probably could have gotten away with speaking AT people largely because of the extent of his scholarship and eloquence.  But that simply was not Manning.  He was someone who was always seeking to learn new information and new analyses.  As such he was one of those rare academics who fully appreciated activists and activism, not as a subject to study as if in a laboratory, but in order to encourage and support them and from who he sought to learn.

I will always appreciate Manning for his work in helping to build and lead the Black Radical Congress.  He and I were two out of an initial core of five people who started the ball rolling that led to the highly successful founding of the Black Radical Congress in June 1998 with 3000 people in attendance.  Manning remained part of the leadership until 2001 when he stepped down due to both concerns regarding his health as well as his commitment to move work forward on his biography of Malcolm X.  In working together in the BRC I always felt that I had a partner in Manning, someone who was never afraid to express his differences, but was constructive and encouraging.

I will additionally appreciate Manning for his marriage to Leith Mullings.  Leith, a professor at the City University of New York, was also part of the core in the building of the BRC and is a noted anthropologist.   Their relationship was truly a partnership in which both learned from one another, respected one another, and deeply loved one another.  Watching the two of them often felt like watching two college students just beginning a romance, though they had been together for quite some time.  It was not just that they were in love and had such a great partnership, but that they saw no inconsistency between their devotion to social justice and their devotion to one another.

Manning will also be remembered for his optimism.  His battle against sarcoidosis spanned two decades.  Manning never gave up.  When he told me that he decided to have a lung transplant he indicated that the doctors gave him two years without a transplant and ten to fifteen with one.  He knew the risks and he accepted them while at the same time being very realistic that while the odds were on his side with a transplant, there was always the chance that he would end up at death’s door.  But it was that optimism, not only about his own battle with illness but about the struggle for social justice that made such a difference.  No, he was not Pollyannaish but he placed all of the challenges that the oppressed faced within a broader context.  He was not going to let anyone be demobilized by the obstacles in our way.

There were some on the left who felt that he was not left enough and too mainstream.  Manning dismissed such criticisms because he was interested in reaching out to regular, grassroots people who were not already within the circles of the Left.  He was relentless in this task and as a esult became one of the most well-known left-wing scholar/activists on the US scene.

There are many other things that can and will be said about the work and life of Manning.  I will end by simply noting how much he will be missed.  His generosity on so many levels and his support for so many people made him a very unique individual.  It is a cliché to note that he cannot be replaced, but the fact of the matter is that he cannot.  What we can do, however, is emulate the rigor of his work and thinking.  That would serve as the ultimate tribute to our fallen brother.