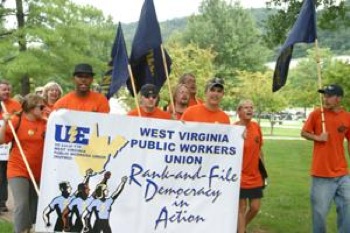 As northern states like Wisconsin and Ohio eliminate collective bargaining rights for public service workers, we often forget that plenty of workers in the South have never had this basic human right.

What difference did it make? The bottom line is that states without collective bargaining do worse. Their services are worse, their state jobs are worse, and their discrimination against people of color is worse.

You Can’t Fight City Hall — Unless You Have Union

The right to bargain a contract goes beyond fighting poverty among state workers, though of course a union contract means a better wage. Among the 39 states that permit collective bargaining for teachers, for example, salaries are 9.5 percent higher.

But in North Carolina, things are so bad that public workers have had wages stolen. In Raleigh, sanitation workers weren’t paid overtime by the city. Workers had to fight for the money they had earned.

The United Electrical Workers aided them in their fight—just as we have helped other public workers across North Carolina, Virginia, and West Virginia. Without a legal mechanism to certify union representation for collective bargaining, the UE forms non-majority unions that organize and fight to improve workers’ lives on the job without a contract.

West Virginia state workers earn so little that many qualify for public aid. The state ranks 48th in public employee salaries. Road crews who repair and maintain roads in dangerous conditions earn as little at $8.36 an hour.

It was so common for employees of the state’s public assistance office to apply for public aid that the agency had to set up a procedure to process the employees’ applications in a different county from the one they worked in, to ensure confidentiality.

“Almost everyone I know who works for the state has to have two or three jobs,” said Gordon Simmons, who worked in the Division of Culture and History. “I know I did. The benefits have gotten so expensive, there are folks who couldn’t afford to have health insurance on the low pay we receive.”

Retirement is anything but golden. Health insurance costs increase constantly and now reach $500 a month—outstripping the pension benefit.

Where they exist, union contracts can provide a roadblock to the corporate takeover of government services. Privatization is a top goal of corporations who look at spending on schools, hospitals, and road maintenance and see easy profit. Local, state, and federal spending on schools alone reached $562 billion in 2007.

With an organized voice, workers have been able to challenge privatization by mobilizing pressure against it, exposing corrupt and wasteful privatization plans, and requiring bargaining over such decisions.

Unions also fight service cuts to vulnerable communities who may otherwise have little voice. North Carolina aims its budget cuts disproportionately at communities of color. Hospitals that serve and employ a majority white population have seen far fewer cuts than hospitals that are majority African-American, by a ratio of 2:1. Workers in North Carolina have fewer means to challenge this discrimination.

Workers in North Carolina’s state hospitals say having no union results in poor staffing ratios and a lack of training and support to do their jobs. Recently a mental health care tech at Central Regional Hospital in Butner was assaulted by a patient. He was punched several times in the face, leaving him with a broken eye socket, fractured upper jaw, and injured nose and eyes. His glasses were broken and his sight was impaired. His co-workers were slow to step in and help him because they were untrained in how to restrain a violent patient and feared being fired for violating hospital policy.

Larsene Taylor, a health care worker, says workplace difficulties mounted after health care for the disabled and mentally ill was privatized in North Carolina in 2001. The state put the patients in private nursing homes and group homes, she said, but without trained staff, those small facilities couldn’t handle the patients and sent them back to the hospitals that no longer had the beds or staff to care for them.

“There is constant mandatory overtime up to 16 hours,” she said. “Errors increase, injuries increase for staff and patients, and there is no continuity of care.”

Amnesty International explains that the U.S., as a member of the ILO (part of the UN), is obligated to uphold this fundamental right. It is also a violation of various trade agreements, including NAFTA, for governments to deny the right to organize and collectively bargain.

The ILO, which responded to a complaint filed by the UE and allies, noted that working conditions in the public sector were deplorable in states without collective bargaining. They found rampant racial and gender discrimination as well as unhealthy and unsafe working conditions.

Federal and state governments brushed off the ILO’s report, defending the ban on collective bargaining and calling it an issue of “states’ rights.”

Politicians haven’t been slowed down by what the law says, whether it’s international law or state law.

During his rush to pass his union-busting bill, Wisconsin Governor Scott Walker constantly invoked the argument that eliminating collective bargaining will help balance a state’s budget.

In reality, states without collective bargaining have the same or worse budget woes. Wisconsin faces a $1.8 billion shortfall. Compare that to North Carolina’s budget shortfall of $2.4 billion.

In fact, North Carolina is worse off than Wisconsin across the board.

For public sector health care workers the median income is $25,800 a year. North Carolina lost nearly 10,000 public school positions this school year, and the state slipped to 46th in spending per pupil and 45th in teacher pay.

Compare that to Wisconsin, where the census finds 10.5 percent of households in poverty, and unemployment is at 7.4 percent. In Wisconsin 15.1 percent of eligible workers are union members.

With states everywhere looking to balance their budgets in the wake of a recession triggered by Wall Street, the path of least resistance is to take away from working people the good quality jobs and services they depend on, like schools, hospitals, and road maintenance. That take-away becomes the second round of taxpayer bailout for business. First corporations demanded bailouts when they bankrupted their own businesses, and now that they are bankrupting our governments with constant tax breaks, they want us to pay for that, too.

The real reason conservative billionaires like the Koch brothers are paying for this attack on public sector workers is not to help states balance their budgets—it’s to break unions and workers’ power. That’s why, in the end, the union-busting bill in Wisconsin was passed as a law separate from budget issues.

Let the Southern states serve as a cautionary tale. As Larsene Taylor says, “Our lives would be 100 percent better if we had collective bargaining.”