Some 350 activists rallied and marched at the U.S. Marine Base at Quantico, Va., March 20 to demand freedom for Army Private Bradley Manning. Manning, accused of leaking secret U.S. government documents to the WikiLeaks website, has been in solitary confinement at the base for nine months.

The demonstrators, including many U.S. military veterans, wanted to put flowers on a replica of the Iwo Jima memorial that sits outside the entrance to the base, but base authorities closed access to the statue, which is normally open to the public. Organizers negotiated with the authorities to allow six demonstrators to lay flowers on the memorial, while the rest remained in a pen across the street, but police did not allow the six past the edge of the road, advising them to throw their flowers at the statue, some 20-30 feet away. Outraged, three of the six sat in the middle of Route 1 and were soon joined by others who broke out of the barricades.

More than a hundred police were on hand including military, Prince County mounted, Quantico and Washington, D.C., Metropolitan police. Virginia State Police arrested 31 protesters, pulling some to their feet by their heads and necks. Daniel Ellsberg of Pentagon Papers fame and Ret. Col. Ann Wright, a 50-year Army diplomat, were pushed off their feet onto sitting protesters.

Kevin Zeese, one of the organizers, said Manning “was acting as the Constitution urges. … He should not be prosecuted for this action. President Obama should use this as an opportunity to reconsider the direction of U.S. foreign policy.” 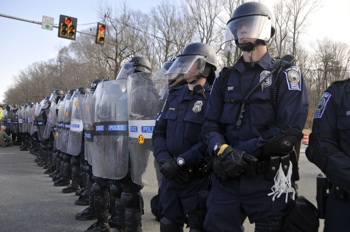 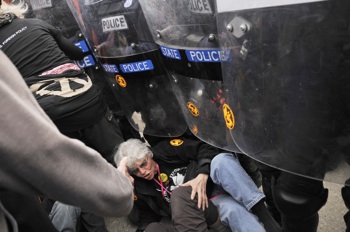